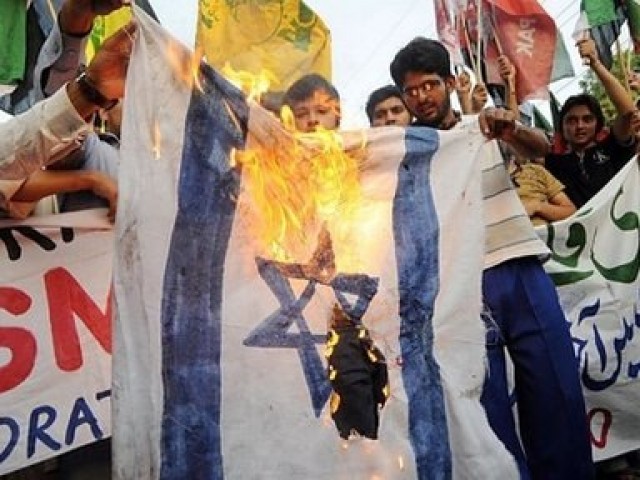 Never have we been told why people should believe that Israel is the root of most evils in Pakistan. PHOTO: REUTERS

Growing up in Peshawar, a slightly conservative city of Pakistan, my sentiments as a child were nothing different from those of others in most parts of the country. I had a slight disliking for India, and sheer hatred for Israel.

Words such as ‘Jewish lobby’, ‘Zionists’, ‘Freemasons’, and many others – whose meanings many of us did not even know – kept ringing in our ears through religious scholars, teachers, friends and peers, and we used to associate all of them directly with Jews, especially Jews of Israel and those having major shares in US corporations.

A few years ago, this very thought came to my mind while I was wondering why we don’t have any diplomatic ties with Israel. Not surprisingly, I failed to find even one solid reason to justify this lack of diplomatic relations.

Even our passport, explicitly barring us from entering Israel, is a forced decision imposed on Pakistanis, especially for those who would like to visit Palestine or Israel for religious, academic or economic purposes.

I think there are two primary reasons for our hatred for Israel: One, the religious structures, among which I grew up, and still respect, and number two, the curriculum I was taught at school, and even at college.

It’s a bit naive to think now that till my late teens, I was busy hating India and Israel without any historical background or logic. The curriculum never taught us historical narratives of both Kashmir and Palestine, and thus gave us only one side of the picture.

I remember attending Friday sermons which would end in curses on India and Israel. Apparently, it was a “positive note”. If those sermons were directed towards policymakers or governments, maybe in some sense, they would have sounded logical. However, praying for deaths of innocent people -all the Jews- is nothing but making a scapegoat for religious sympathies.

Citizens of the same country came forward to support Palestinians against settlements, which proved all fundamentalist anti-Semitic theories wrong.

The situation concerning India luckily has settled to some extent with increasing awareness and education, but Israel holds the top spot when it comes to ‘enemies of Islam’, for a layman.

True, there are violations going on in Palestine; true, that Israel has fought multiple wars with Arab states, and true that Israel is a strong ally of India and the USA, but does it provide any rationale for us to not have any sort of relationship with Israel?

If foreign interventions or occupations are to be used as a criterion, then first and foremost Pakistan should cut off its ties with of the Western states on whose aid the country is relying.

The point I try to make here is that never in our academic or religious institutions have we been explained why Israel should be cursed. Never have we been told why people should believe that Israel is the root of most evils in Pakistan. Even if we try proving Israel’s hostility towards Pakistan, except one theory of Israel’s plan of attacking Pakistan’s nuclear set-up in Kahuta, nothing comes to the fore.

Pakistan, on the other hand, has many times volunteered for Arab wars against Israel – wars that were never directly related to Pakistan. The same countries Pakistani soldiers were fighting for against Israel never came for any help during the wars of 1965 and 1971.

In terms of strategic cooperation, when it came to Pakistan’s gain and interest, general Ziaul Haq was not shy of establishing intelligence cooperation networks with Israeli intelligence against the Soviet Union in Afghanistan, but when it came recognition and bilateral ties, Zia was hesitant, like all other leaders of the country.

Without going into historical narratives of to whom true ownership of the Israel-Palestine land belongs, it is ironic to see that many of the Muslim states Pakistan tags as closest partners, and brothers such as Turkey and Egypt, have recognised Israel and have maintained cordial ties with it. If we wish to see an independent state of Palestine, it is important to have some sort of ties with Israel, as having no relations would only limit us to statements and rhetoric in support of Palestine.

If today, there is a hope for resolution of Kashmir issue, it is only because India and Pakistan have formal ties on every possible diplomatic level and forum, and same goes for Israel.

We, as a nation, are already suffering from the setbacks of hate-filled curriculum and society that seeped into our values allowing no space for minorities. It is time we start giving space to everyone and work towards inter-faith and inter-ethnic harmony and collaboration.

If we can have friends in India and the USA, why can’t we have friends in Israel? Why not pave a way for initiation of relations, primarily with the people, and not initially the government that may create opportunities for peace and a better future for the coming generations?

P.S. I don’t intend to hurt anyone’s religious or emotional attachment with Palestine, or to enter into right-wrong debate of Palestine crisis. The only purpose of this blog is finding answers to questions that constantly encounter us, the Pakistanis, while interacting with foreigners abroad.