Champions League 2013: Madrid in search for their Decima 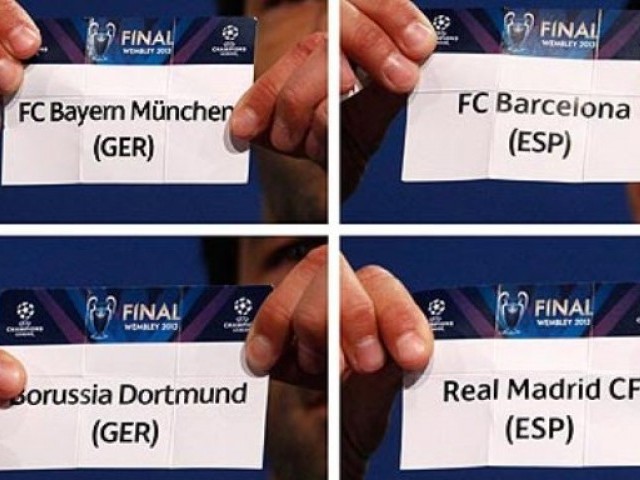 After a short break the UEFA Champions League returns with some nail biting ties for the semi finals. The draws in Nyon, Switzerland, resulted in a Germany versus Spain for the last knock out round of the competition.

It all kicks off at Allianz Arena when the German giants host Barcelona. Both the teams have dominated their leagues where Bayern Munich has already won theirs becoming the fastest team to have won the league in the four biggest leagues (Italy, Germany, Spain and England) while Barcelona is closing in on theirs.

Both the clubs have a lot in common, starting with the intense rivalry with Real Madrid. They have also won the Champions League four times and in the past four years either of these two teams have been in the final, Barcelona being more successful. They both owe their success to the acclaimed Dutch coach Louis van Gaal. Former Catalans coach Pep Guardiola is set to join Bayern at the start of the new term.

Barcelona has rested their star player Lionel Messi since the last Champions League clash with PSG but he seems to be fit for the big night on Tuesday. Barcelona has won their respective two matches without the Argentine, though the last one was scrappy with a single strike from Cesc Fabregas.

On the other end, Bayern while fielding their B team was still able to thrash Hannover and the past two matches have netted 12 times in total.

Bayern looks like the team to beat and are the favourites over the course of two legs but the Catalans are not any less either. However, Bayern will be without Toni Kroos due to his injury and also without their inform striker Mario Mandzukic because of his suspension.

Barcelona has to recover from their injury woes with captain Puyol who will be out along with Mascherano. The Catalans sparingly managed to keep PSG at bay but the Germans won’t be as forgiving. Thomas Muller will be the man to keep an eye on as he is sneaking up with crucial goals in this completion.

The other semi final is also meant to take place in Germany at the Signal Iduna Park. The 65,000 plus seater will be a difficult place for the Spanish giants, Real Madrid. Both the clubs forfeited their league title a while ago and have set their sights towards Europe.

Furthermore, both the clubs are in aspiring forms in Europe with Dortmund being the only team in the semis that is still undefeated while the Madrid based club is the highest away goal scoring team in the competition.

It’s all for one this season at Real Madrid while they chase their tenth (Decima) Champions League title. Since the arrival of José Mourinho, Real Madrid has qualified for the semi finals for the third consecutive year. The other two semi finalists this season have faced Real Madrid at the same stage in the previous two years. Real Madrid faced Derby rivals Athletico Madrid, after beating their arch rivals Barcelona in the Spanish Cup.

Real Madrid and Borussia Dortmund have won both of their matches since the Champions League break. Real Madrid has scored three goals each in their last two games. Lewandowski has netted in the German’s last two games scoring six in total. Madrid match was marred by injuries to forward Karim Benzema, left back Marcelo and the Croatian Luka Modric.

Both the sides met in the group stage this season with Dortmund who got the better of the two. Dortmund won the home leg by two goals to one while he drew the other match with two goals each. Marco Reus is their main player to watch out for with Mario Gotze also posing as a huge threat at goal. Cristiano Ronaldo is hitting top form and has already crossed the 50 goal mark. He is the leading scorer of the Champions League with 11 goals to his name. Recently the playmaker Mesut Ozil has been popping up in the score sheet with two braces in three league matches.

All eyes will be set at Germany for the Tuesday and Wednesday night clashes as the semi final stage comes in progress.

Madrid is searching for the elusive tenth title while the German league winners are deemed as favourites for the competition. Another couple of great nights await us in the Champions League kicking off at 11:45 sharp PST.

An undergraduate student who is pursuing a Chemical Engineering degree from NUST. He tweets @moeez_ahmed

Barcelona versus Paris Saint Germain: Are we in for something special?