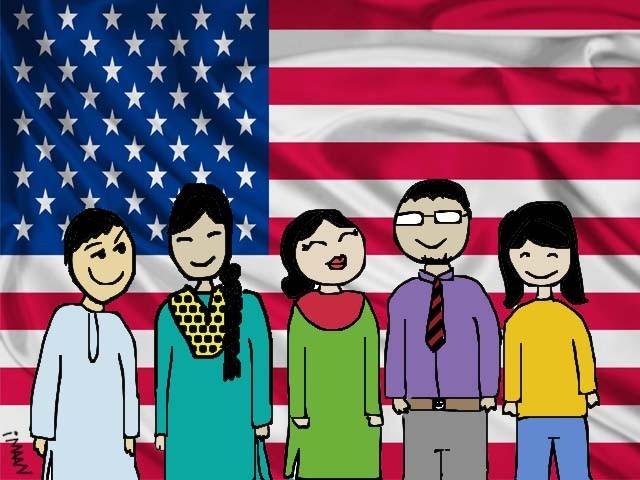 Bringing out your inner desi is key to handling a PSA. Eventually, you’ll find that it is no different than being a part of a large joint family system. DESIGN: IMAAN SHEIKH

Thanks to globalisation and a constant influx of immigrants and international students, all major colleges in America now have a Pakistani Student Association (PSA).

Running a PSA is a unique, enthralling experience and is known to be a great remedy for a drama-free college life. Whether you are in Pakistan wondering what life is like abroad, or a Pakistani about to attend an American college, here is your short guide on how NOT to run a PSA at an American college.

1. Do not ignore the rishta prospects

Most of the people in your organisation are not in for the love of Pakistan or its culture. All they really want is to have a good time with people who they think have the potential of moving beyond the ‘friend zone’. This is your biggest demographic. Do not make the fatal mistake of ignoring this group! Make sure you have enough social events planned out so that everyone in the organisation has a fair shot at everyone else.

2. Do not ignore the religion

If you think you can run a Pakistani student organisation by ignoring religion, boy, are you mistaken. Make sure you plan around all the ‘religious’ activities going on around you. In fact, as often as you can, incorporate small words such as ‘Mashallah’ and ‘Alhamdulillah’ at the end of your sentences so people make no assumptions about your religiosity. Also, try never to apply some eccentric secularist theory to your organisation; chances are you will turn away another key demographic.

3. Do not ignore the uncles

The uncles and aunties are among your organisation’s greatest assets. They may not be the most ideal members and would most definitely scare people off, but these are the people you will turn to when you need those clothes for fashion shows, that food for your major event or all those decoction items no one seems to have. Make sure not to ignore them and, ideally every once in a while, plan a chai night with some poetry for a nice, warm desi touch.

4. Do not ignore controversy

Contrary to what you may think, controversy attracts. After a long hard day of classes most people just want a nice place where they can come and gossip about people they know. Your organisation can serve as a perfect platform for this expression.

Do not shy away from controversy; in fact, embrace it and wear it like a guard of honour. Remember, in your organisation ignoring the controversy is the only true controversy and make sure you never ever fall for it.

5. Try not to be politically correct

To successfully run your organisation, it’s important to take stances that will attract people. Don’t get fixated on some antiquated moral argument and say what you have to say to whomever you have to say.

Don’t be afraid to overstate facts about yourself, your organisation or your country. It’s okay to claim that Pakistan is better off than India in almost all disciplines. You may want to, every once in a while, reiterate that T20 cricket is the only cricket that matters and India’s World Cup win means nothing. Remember, it’s all about marketing.

Your twenty-old-year experience with your culture should teach you that Pakistanis haven’t gotten their heads around the concept of division of labour and delegation of duties. In your organisation, these words are used to describe the minimum amount of effort needed to get by without being yelled at, so be sure to avoid them altogether. In contrast, make sure when you hand out responsibilities, you do so in the most general terms, so you have all your bases covered should a dispute (which it still most definitely will) arise.

7. Do not invest personal money

Since most of the people in your organisation are going to be pre-med or engineering students, you, like most people, would have no idea how to manage your organisation’s finances. So remember, no matter what happens, do not put your personal money into the organisation in the hopes that it will repay you. It will almost never happen and will only result in inaccurate monthly budgets for the rest of your semester.

Bringing out your inner desi is key to handling a PSA.

Eventually, you’ll find that it is no different than being a part of a large joint family system.

Best of luck with it!