The comparative disadvantage of poll violence 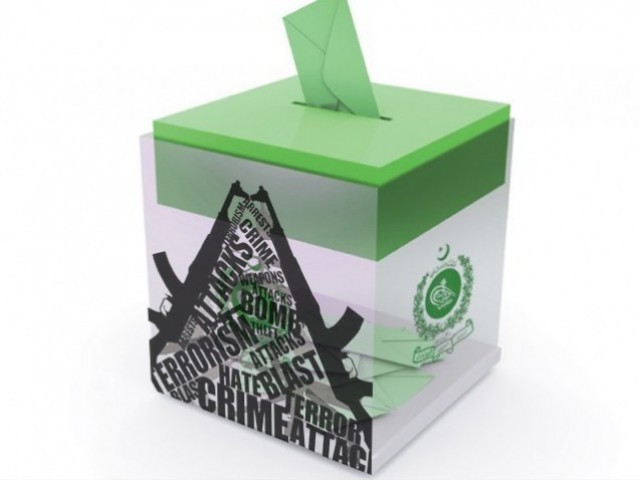 The Election Commission of Pakistan, the interim government and the judiciary must be cognisant of the real dangers of pre-election violence. PHOTO: FILE

Pundits have long predicted a blood-stained run-up to election day.

So far, candidates recovering from a gruelling scrutiny process and an equally tiresome ticket awarding process, kept electioneering to a minimum. But as we enter the last few weeks of campaigning, the need for public canvassing is forcing candidates to take to the streets.

As aspirants reach out to their constituents, they are exposing themselves to a clear and present danger — the threat to their lives. This threat, posed by terrorist elements bent upon derailing elections, is particularly significant for those who belong to districts with a deteriorating security situation, as well as those canvassing for political parties that have denounced militancy.

In recent times, two provincial assembly candidates, the MQM’s Fakhrul Islam and the ANP’s Mukarram Shah have been killed in targeted attacks.

Another ANP candidate Arbab Ayub Jan narrowly escaped a bomb attack, while the election office of Kamran Khan, a former lawmaker from North Waziristan, was blown up in Miramshah besides the recent attack in which Ghulam Ahmed Bilour was injured.

Despite the real threat that many candidates face, there is a debate going on whether security for politicians and former government officials should be provided by the police or not.

While everyone agrees that exorbitant expenses in the name of security cannot be borne by the exchequer, the need of the hour is to ensure that candidates are provided the necessary security.

There are two justifications for this. Firstly, Pakistan cannot afford the loss of another leading politician, as it did before the 2008 elections. Secondly, not providing adequate security will only increase the sense of fear amongst party workers, leading to a mute election campaign resulting in some parties being unable to fully canvass their supporters.

In the first case, a wave of a sympathy vote will unnecessarily skew the election results. In the second, the inability of the government to ensure the safety of candidates will result in undue advantage for opposing candidates.

The Election Commission of Pakistan, the interim government and the judiciary must be cognisant of the real dangers of pre-election violence.

To ensure a free and fair election, those entrusted with this task must take all possible measures to ensure the safety of candidates. Not doing so will affect electioneering and result in multiple challenges to the outcome of the elections.

A sub-editor on the national desk of The Express Tribune.

Of bailout packages and bullet trains

The sharks have tasted blood