Remember, remember, the fourth of December! 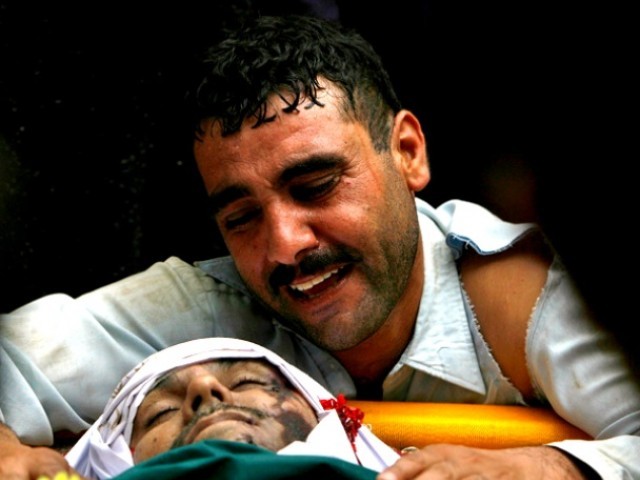 A man cries next to the body of his relative, who was a victim of a car bomb attack in Kohat. PHOTO: REUTERS

I remember that day. It was December 4, 2009. The residents of Rawalpindi were in shock. How could a mosque right next to the military headquarters, surrounded by military bungalows with a busy local market nearby be attacked in broad daylight?

There were frantic calls made; mothers called their children’s schools, fathers held their sons by their hands in the mosques and brothers who had not spoken for years hysterically reached out to each other. First the family, then friends, then colleagues… was everyone we knew fine? They weren’t.

Rawalpindi is a small city. A family member, a friend, a colleague, a friend of a friend, a walking partner – most people knew someone who had been killed or injured in the attack.

I remember driving through Parade Lane the next day. My brother had lost a friend and we were going to attend his funeral. Every alternative house had a tent in their lawns. Rawalpindi was mourning.

Pakistani soldiers take up position outside a besieged mosque in Rawalpindi on December 4, 2009. Photo: AFP

It was the first time I really saw what it means to be at war. It was a busy day and there was work to be done. Grieving parents attended their guests while the siblings and friends took up the chores. The boys took over the graveyard arrangements and the girls over the food. They did not weep. They consoled.

They were so young – the ‘new generation’; the whiz kids with their smart phones and American accents- misunderstood and always in trouble! And all the time I sat there, I remember thinking how wrong all of this was. The world was in disequilibrium that day.

Children should be attending birthday parties, not funerals.

A news report stated that between 9/11 to March 2013, over 50,000 lives have been lost as a result of terrorism in Pakistan. Television screens show horrific images from blasts across the country and newspapers report these incidents with all their gruesome details.

What was different about the December 4th attack?

“The war has now come to our doorsteps” – this line was repeated frequently.

These were not statistics read in the newspapers or breaking news flashed on a dozen news channels. These were people. People we knew, people we related to.

Almost three and a half years later, three people were killed and more than 264 injured during a series of shootings and bombings in Boston that came to be known as the Boston marathon bombings. People reached out to their loved ones, grieved over all that is lost, the images from the tragedy bring back all that you keep in that closed drawer in the corner of your mind – all that is impossible to forget anyway. The proximity of it brings back memories, even from where I am, half way across the country. Things were not too much different on the other side of the globe.

America mourns – all 52 states. The three innocent lives that were lost are remembered in moments of silence, half stall flags, vigils and memorial sites. President Barrack Obama consoled the families of those who had died before their time and attended the service to honour the victims of the attacks.

During my visits to the Malakand division, I saw homes riddled with bullet holes, piles of rubble where there had once been schools, the Zibba Chawk (slaughter courtyard) and the Goli Mar bazaar (gunfire market) – reminiscent of the deadly war that had been fought there. And yet my darkest memory of the war against terrorism remains that of December 4, 2009. It was the urban elite that time. Not some congested market in the middle of Peshawar, or some township in tribal Waziristan. It was the city, our city. We saw people grieving, and we grieved with them.

A view of the damaged mosque after twin bomb attacks in the Baazdara area of Malakand region. Photo: AFP

The war in Pakistan continues. They say that Pakistan’s army has lost roughly twice as many soldiers in the conflict with the Taliban as the US. And the count is on for 2014. But it is not at our doorsteps. It is in areas about which, all we know, comes from our geography books. The proximity is gone, and it has taken our empathy with it. There are rare occurrences that bring back the fear; a blast in a mainstream market in Lahore, a security threat in Islamabad; we make a few calls, watch the news and get back to work.

At least ten people are killed and over 15 injured when a suicide bomber struck a Muharram procession at Qasr-e-Shabir Imambargah. Photo: WASEEM IMRAN

A woman I met in Swat once said to me,

“This is the first time I have seen so many bahr wale log (foreigners). They have come for the relief efforts, nobody ever came here before.”

The foreigners she was referring to were us, Pakistanis from the cities.

The borders inside Pakistan go way beyond the geography. Our policies cannot change before our mindsets do. More than 50,000 lives are lost – some to the Taliban, some to the Pakistan security forces, and some to the drone attacks by the US government. But in Islamabad, Karachi and Lahore, life goes on. While in another land not so far away, farmers going about their daily business are killed by a drone attack.

A doctoral student of Political Science. Her passions include books, meeting new people and lost causes.

An open letter to Junaid Jamshed