At government hospitals, life is cheap 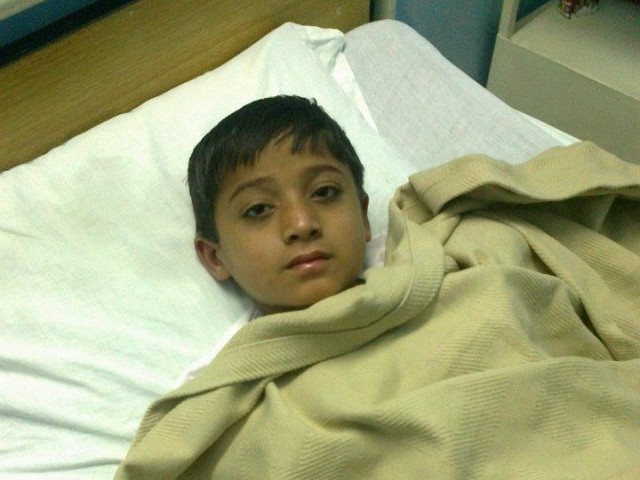 These poor children are starved of medical attention but government hospitals have no funds to attend to their needs.

It is almost impossible to change the fate of those little children who depend on government hospitals to save their lives. Recently, I visited several hospitals in Karachi and the condition of those hospitals and the quality of the care provided to the children was disgraceful.

The poor health system prevailing in Jinnah Hospital, especially, made my heart sink.

There was no electricity and to my horror, a large number of insects and cats were roaming about in the wards aimlessly. The terrible stench from the toilets could be smelled till the far ends of the corridor, and to think that this is a hospital where cleanliness and providing healthcare is the primary focus – it was deeply disappointing.

This served as a catalyst to stimulate my disgust and anger, but I knew the worst was yet to come as this was just the beginning.

A few moments later, I started visiting the patients. Among them was a 12-year-old boy whose mother seemed exhausted and disconsolate because of her child’s deteriorating health.

I had brought some presents with me for the patients as I knew I would be meeting little children; I gave the boy an icebreaker candy and just like that we started talking.

While conversing with him, I found out that not only was he a talented child but had also won numerous trophies in different cricket championships that were held in his locality. During one of the matches, a ball hit his foot which later swelled up. The boy was taken to Indus Hospital where he underwent a surgery, but it did not help him and the condition of his foot worsened.

The doctors put the boy under prolonged observation, but to no avail.

His parents were getting restless as their child was undergoing constant trauma and the only solution that struck them was to take him to a better hospital; so here he was, at Jinnah Hospital. The boy was diagnosed with cancer (in his foot) which required his foot to be amputated in order to prevent the cancer from affecting other parts of his body.

His mother, while mourning the fate of her child, was busy doing other stuff, like, changing the boy’s urine bag because the staff was unavailable to do it for her.

She used a paper fan to help her son beat the heat and was heard constantly uttering words of encouragement and love to keep her child’s faith intact. Yet, her pain was evident in her voice.

Although, the doctors had advised that the child be taken outside regularly to get some fresh air, he was unable to do so. The elevators were out of order and there were no wheelchairs available for the child to go downstairs in the open air.

I have visited many hospitals as I was the CMO (Chief Marketing Officer) of an NGO, Meri Bhi Aik Khuwaish Hai, but the visit to Jinnah Hospital and this particular encounter stuck to me.

It happened almost a year ago, but I am still unable to let it go. Something about that experience haunts me each time I think about it; I can’t help but feel disgusted and disappointed.

When I think about it, the conversation replays in my mind and I can hear the pain of a broken mother trying to keep her son from falling apart.

What worries me is that this is the tragedy of just one of the families present at the hospital and there are many others who have faced a similar fate if not worse and nothing is being done about it.

Private hospitals are beyond reach to a lot of people and this leaves them with no option but to deliberately put their wheel of fortune in the hands of government hospitals; these hospitals are either bound because of lack of funds or they house doctors who are not the least bit concerned about the dignity of their profession. They conveniently forget that this is their job, this is something that they signed up for when they joined the hospital, whether it means sleepless nights or inconvenient mornings.

Alas! The fate of the poor is the only thing at stake and the well to do continue to enjoy the privileges.

We might have forgotten, but destiny has its ways and they say “what goes around comes back around!”

An alumni of Nixor College where she worked with different NGOs. She has a keen interest in community service and is currently a housewife.