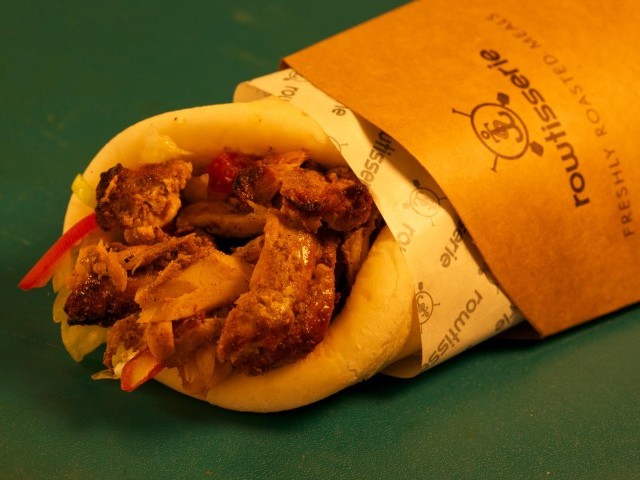 Yes, this is the shawarma that had been calling out to me. PHOTO: https://www.facebook.com/Rowtisserie

Karachiites love eating and then talking about the food they just ate. Thus, when any new eatery or home delivery service opens up, we want to try it or know from our ‘social’ circle if it is worth trying out.

As of late, my Facebook timeline has been full of comments about the Rowtisserie.

One patron declared that at Rowtisserie she “had the most delicious shawarmas – never had better ones!”

Someone else stated that “the secret ‘Row’ sauce is beyond yum and the Rowtisserie chicken is super healthy.”

Since the social media consensus was that everyone ‘loved every bit of (Rowtisserie]’, my husband and I decided to give it a try too.

We called up the given number and placed an order of Buffalo Wings and Mezze Platter as starters, and Row Meal IV (full chicken, 4 choices of sidelines and 1.5 liter soft drink for Rs2,195) as our main course.

The gentleman on the other side was polite and gave us a 45-minute time period in which our food would be delivered – and they were there on time with warm food!

Menu:
The Rowtisserie’s menu is extremely healthy, yet basic – two types of grilled chicken, two types of shawarmas and three kinds of sandwiches are all you have to pick from, basically. However, to be fair, they do give us options in salads, side-lines, and drinks (hot and cold) to augment it. Also, the foodie in me would rather just get one good item from an eatery than a choice of 50 that are all bad, so I’m not complaining!

We pleasantly noted that the Buffalo wings we had ordered were not marinated in a bottled sauce. They had been prepared in the Rowtisserie kitchen and this gave the wings a very nice, unique taste.

The only downside was that, for the price of Rs395, we expected more than just four pieces of chicken wings.

The other starter we had ordered was the Mezze Platter, which included feta cheese, olives, tabouleh, pickle, mutabbal, tzatziki, hummus, pita and grilled chicken. Everything was cooked to perfection (and trust me, I am very finicky about my Mezze).

I made two observations:

1. With such a large choice of items, one piece of pita bread was just not enough. I wish the order taker had informed us about this so that we could have ordered at least two more pitas to go with it.

Coming to our main course, we had ordered Row Meal IV which included a full chicken with four choices of high-sides (we had ordered Mash & Gravy, Hummus, Pita and New Potato) and a 1.5 litre soft drink.

Everything in the main course was perfect. The special treat was the garlic and row sauces that the rotisserie chicken was served with. They were just yummy!

The hummus that came as one of the high-sides with the meal was just not in a large enough portion to justify its Rs150 price independently. But overall, the meal was superb.

A dine-in option is also available and I did go to check out the place for lunch and also to have the shawarma (yes, the shawarma which had been calling out to me since I had seen the below photo on the Rowtisserie Facebook page).

The restaurant is tucked away in a corner of Khadda market, and has a seating capacity of 12 people at max. To say that it is a very small dine-in place is an understatement, because even with eight guests in there, we had to wait for five minutes for a table.

We ordered the chicken shawarma (we also wanted to try the beef shawarma, but were informed by the serving staff that the management is working on improving it, so it is currently off the menu).

(The kitchen and serving staff at Rowtisserie. PHOTO: SAMRA MUSLIM)

The chicken shawarma is priced at a hefty Rs425, for a lightweight shawarma, and Rs474 for a heavy one.

The meal was served within five minutes of ordering it and the chicken was wrapped in freshly made pita and was served with pickles on the side. I found my shawarma to be a bit dry, but it was immediately taken back and some delicious garlic sauce was added to make it perfect.

I wanted to give their chocolate éclairs a try, but sadly they were not available.

For a quick and healthy lunch or dinner, Rowtisserie is a perfect choice, and if you are smart when ordering a meal, it can cost you between Rs600-1000 per head.

Prices: About Rs1000 per head (excluding dessert and drinks).

Give it a shot and let me know what you would rate it!

She has been associated with Etihad Airways, Starwood Hotels & Resort and Zindagi Trust in the past and has recently moved to Digital Marketing Strategy with a leading agency based in Karachi. She tweets @samramuslim twitter.com/samramuslim

Shuddh Desi Romance: Fairy tales exist, with or without marriage!

Ghanchakkar: A dark comedy in disguise!

Chashme Baddoor: Another sad attempt at a remake