Is Pakistan equipped to manage a natural disaster? 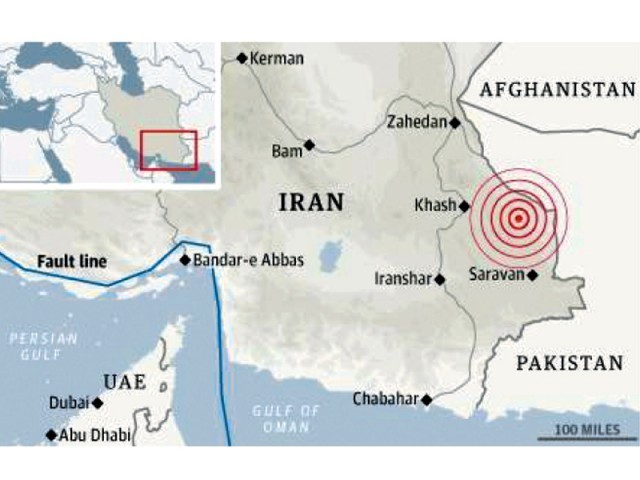 7.8-magnitude quake strikes southeast Iran at depth of 82km; tremors felt across Pakistan and as far as the Gulf states and New Delhi. MAP SOURCE: USGS

It has barely been a day and a half since earthquake tremors jolted all the major urban cities of Pakistan and our media’s super short attention span has already managed to shift to other so-called important matters.

Have we not suffered enough of nature’s wrath in the last decade to be paying a little more attention to Pakistan’s disaster management capabilities?

A few examples of such disasters that shook the nation as a whole are: the earthquake of 2005, the Balochistan floods of 2009 and the monsoon flooding of the Indus in 2010 and 2011.

These disasters appear to have slipped into oblivion. The image of the debris of Margalla Towers in Islamabad has all but faded from our collective memory and been kept aside.

What is surprising is that the most this entire nation has come up with is calling muftis on news channels to deliver sermons on God’s wrath and the sorry state of our generation.

I question, what have we truly done?

Is it sufficient enough to view these disasters as ‘natural’ and therefore completely out of our control?

Will recounting divine stories of the destruction of previous ummahs (Muslim generations) bring any succour to the families of those Pakistanis who perished in this last earthquake?

Will reciting ayats and astaghfar (forgiveness) in the assemblies help our beleaguered nation?

The civilians in the country are already doing that but they are looking up to those in the assembly and Parliament to answer questions of faulty infrastructure, a flawed flood relief plan and a non-existent rehabilitation centre for victims of natural disasters!

When will we come out of our ludicrous state of inaction to mitigate the destruction from these accidents of nature?

In all the past cases of nature’s fury unleashed upon Pakistan, our NDMA has only achieved consistent absence from every site of destruction and only ad hoc and piecemeal measures have characterised each effort of response.

After the phenomenal success of National Logistics Cell (NLC), Fauji Fertilisers and Malik Riaz’s Bahria Town maybe NDMA too is another endeavour to accommodate bored and jobless, retired generals and military officers.

Our past democratic government achieved the distinction of possessing a cabinet with over 50 ministers but in this act of doling out government riches and patronage to political allies the creation of a separate Disaster Management Ministry eluded the political wheeling dealing.

Even the dry numbers of economics and budget deficits would shed a light on the necessity of such desperate and novel measures in desperate times to achieve some semblance of action and coordination when a natural disaster strikes.

In another piece of breaking news the defence budget numbers have been reported to go up by 13% whereas a 2011 report on NDMA stated the organisation’s budget to be a paltry Rs65 million!

Our TV screens are now overflowing with lions, arrows and cricket bats promising rivers of milk and honey for Pakistan after the next elections. Every party’s manifesto addresses the party’s focus on the national issues of GDP growth, unemployment, load shedding, terrorism, education, health, provincial autonomy and what not but not a single of these manifestos highlights the alarming state of disaster management in Pakistan.

A talk show debate on rationalising and improving the disaster management capacity of the country is far less enticing for media viewer ratings than organising and shouting contests for parliamentarians or reporting the gory details of another terrorist or drone attack.

But for now, a dose of astaghfar will suffice to shield a 21st century Pakistan from the fury of nature because if dozens die, so what?

It is out of our control.

A law student at Szabist, a proud Karachiite and a cricket buff who loves reading and writing.

Mr Asif Ali Zardari, you have done it!