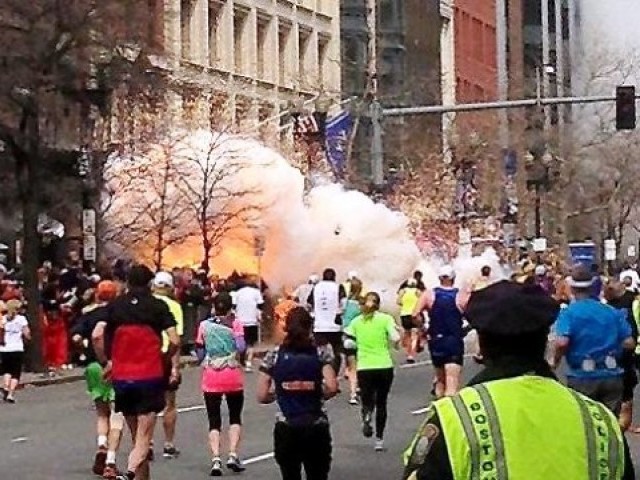 Is it insane that I feel a little guilty, but I have no idea why? PHOTO: AFP

Last time I checked, terrorism had no nationality or religion. It was defined as the senseless slaughter of innocents by perpetrators of violence.

No matter what causes these terrorists claim to endorse, the damage they inflicted was not supposed to represent the teachings of the religion they identified with or the country they hailed from.

All that tolerance is only in theory though. When we hear of attacks and blasts by violent groups, we tend to assume everyone who is associated with the belief system which these extremists recognise is tainted by their malicious intents.

With the Boston Marathon blasts only a few hours old, rumours of the attacks having been staged by extremist Muslims have thrown the Muslim community across the globe into disarray. As for Muslim Americans, this foreboding feeling is familiar terrain.

9/11 saw them thrown into jail, observed warily in public places, isolated socially in schools and offices on accounts of a Quran in the house, a long beard, a head scarf or even a middle-eastern accent. Few Muslim Americans have not been on the receiving end of the suspicion, bordering on hatred that Muslim communities are eyed with. Yet Islamophobia remains a phenomenon American media and lawmakers rarely talk about. Despite no certain news of the people or events behind the terrible incident in Boston, the social media is already split between two camps- those who sit with fingers crossed, wishing fervently for the people behind the blasts to be anyone but followers of Islam, and those who have already begun pointing fingers at the nearest Muslims they see, asking for their expulsion, punishment and public condemnation.

As a Pakistani Muslim coming to the States for the first time, this was my worst nightmare: being recognised as an enemy just because I was born in a certain place, or I prayed in a different way. Family and friends asked me not to take my national flag along, to leave behind my copy of the Holy Quran. I was terrified to disclose my identity when I first stepped off the plane into the liberal land of USA.

A year later, I feel relatively safer, more welcome in a college community that seems to accept me for who I am. But there is that familiar second look from parents of some American friends, when I say I am Muslim, or that my family is in Pakistan. Often it is nothing but curiosity.

I am used to questions like does Pakistan have internet?

How come you know so much English if you’re from a third world Muslim country?

But there is also the faint mistrust I have come to recognise. Because some crazy men decided to kill innocent people in the name of a religion I identify with. Because I am not the majority. Because I am a different colour, my Ls and Rs are not American enough, and often words like Inshallah (God willing) and Mashallah (thanks be to Allah) escape my lips.

If the man or woman behind the Boston attacks turns out to indeed be a Muslim, how scared should I be? Should I take down the flag in my room, and stop praying in the common rooms at college? Should I start lying about where I am from or what faith I belong to? Should I stop talking about how I am an International Relations major because enabling peace and security for people around me is my first priority in life, because, well no one’s going to believe me?

Is it insane that I feel a little guilty, but I have no idea why?

Either way, I must brace myself now for the anti-American Facebook statuses from home; friends who decide that this attack is poetic justice for the drone attacks they believe American society condones, or some other kind of loss they decided is greater than the death of children in another part of the world.

Every time something goes wrong in the west, there are always those in the third world who take this as an opportunity to compare the losses with their own, as if terrorism is a competition, and by losing more lives in their part of the world, they have scored a victory that needs to be publicised.

Perhaps this is when American society will understand that whether the people behind the Boston attacks were Muslim or not, the majority of Muslims across the world do not believe in violence, or terrorism, or killing innocent people.

Maybe this will be the incident that makes global communities realise that every kind of loss of innocent life is to be grieved over; the enemy is the same extremism and disregard for life, whether the latest blast be in Karachi or Damascus or Mali or Boston. Or maybe I’ve been doing too much wishful thinking, and its time I place my Quran in a good hiding spot and practiced my American accent again.