Aangan Terrha: The theatre lover’s fix of nostalgia and entertainment 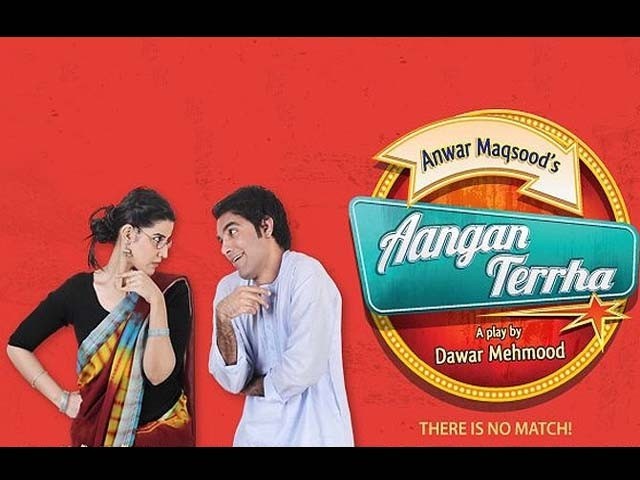 Everyone was hoping for a worthy show that could make them relive their old memories. PHOTO: PUBLICITY

The chance to watch the most awaited play in the theatrical history of Karachi came to me by the sheer luck of getting some free passes, as Rs1500 for a ticket seemed too steep a price.

I was greeted by an excited crowd that had gathered even before the gates opened.

There was palpable excitement in the air. Everyone was hoping for a worthy show that could make them relive their old memories.

Being a die-hard fan of Aangan Terrha and having almost rote-learned the entire show – thanks to the presence of old DVDs in the house – I was sceptical about whether my expectations would be met or not. The auditorium was jam-packed with people even sitting on the stairs. The ushers were smartly dressed in kurta pajama and saris that set the ambiance for the show perfectly.

Anwar Maqsood came on the stage just as the clock struck 8:00pm and gave a preamble to the re-adaptation of the show.

The curtains were raised to Akbar humming playfully on the stairs and gradually other characters emerged in the 90-minute whirlwind of wit, satire and social comment.

Did Aangan Terrha outlive its predecessor?

Akbar was, and remains, the highlight of the play. It was a treat to watch his expressions and delivery of dialogue which resonated with Salim Nasir perfectly. His characteristic mimicry, mannerisms and gestures made it worth the watch. Throughout the 90-minute play, he remained the embodiment of tanz-o-mazah (satire) that was the hallmark of his character.

He brought the audience laughs, irony, moments of reflection and tears, because you just couldn’t watch the play without remembering Salim Nasir. It is surely hard to step in to the shoes of a giant, and Yasir Hussain not only did that but also managed to skilfully get into the soul of the character.

Jehan Ara was entertaining too, but no way at par with Bushra Ansari. Hareem’s delivery of dialogues did not reflect the changes in situation well.

The character of Jehan Ara contains many shades – the grumpy wife who is dissatisfied at her luck in life, the suspecting wife whose radars are up for detecting any affairs her husband might have, and the subtle shade of a loving woman who secretly cares for Akbar and her husband.

The portrayal fell just a bit short of the mark however, the effort was great.

Mehboob sahib fell abysmally short of expectations. In the actual play, Mehboob Ahmed is a perfect embodiment of culture and refinement — what you call “chalti phirti tehzeeb”  in Urdu.

This attribute is missing in the present Mehboob Ahmed, probably due to his coarse voice. Some old characters resurface in the play, including Sahafi and Shair (reminding one sorely of Moin Akhtar). Some new additions are introduced as well, like a morning show host Mehbooba. The sets – also done by the multi-talented Yasir Hussain – gelled in perfectly with the play’s script. The house reflected its owner’s simplicity and understated lifestyle.

The power of the script and intensity of the drama did not bore audience for a second despite the single set and few characters.

The play remains brilliant as it was. The dosage of heavy Urdu is reduced, probably to accommodate new sensibilities. In the actual play, even Chaudhry sahib recites perfect Ghalib verses which sound funny due to his way of pronunciation.

In the new play, Chaudhry Sahab’s couplets are laden with mispronunciation, in a way to introduce humorous appeal. Besides, ambiguous, suggestive sentences have definitely increased a lot since the last play.

The fusion of the old and new indeed made for a great theatrical experience. The play’s unparalleled success also tells us that if a script has relevance and content, it could survive without unnecessary dramatics, songs and cheap tactics. It is good to see that although the Aangan is still Terrha, our youth is creative and entrepreneurial enough to make it livable.

The author is a digital marketer by profession with a weakness for the written word, fries, harry potter and tea.

Male feminist: The day I learnt the meaning of 'anti-climax'