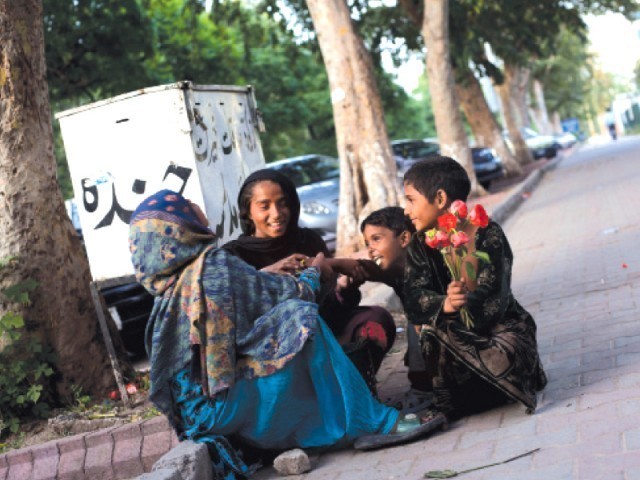 It isn't their fault that they were born in a country that gives them no rights. PHOTO: MYRA IQBAL/EXPRESS

“So, what are you doing on the International Day for Street Children?”

A simple question I asked around to get to know the opinion of people in my city. To my dismay, none of them knew about the existence of the day! When I told them about it, hardly any responded that they would be doing something nice for the improvised.

A few even argued over the point of having such a day. They believed that it was a ‘lame’ concept of the modern day and found it ridiculous to attribute one day to one person.

The difference of opinion and unawareness about such a day aside, what struck me the most was that majority of the people disliked the mere existence of street children as if they were somehow at fault for their misfortune. Upon my inquiry, they said they get annoyed by the persistent begging, constant tapping and fake ‘sympathy-earning’ faces. They said it was unhealthy and disturbing to come across a beggar at every traffic light and then having to listen to their soppy stories was tiresome. ‘Nuisance, fake, liars, dirty, too many, sad and annoying’ were some adjectives used to describe these children. This year, International Day for Street Children is being celebrated not to acknowledge the existence of at least a 100 million street children worldwide but to integrate them in our society, by making people like us aware of their existence, significance, rights and to see them as something other than a social issue or disease.

At the moment there are 1.2 million street children, abandoned and exploited, in Pakistan and 70,000 plus in Islamabad alone.

Street children can be broadly classified in to three categories:

The largest category are children who have homes but they work on the streets during the day and return to their families at the end of the day. They work to contribute to their limited family income and their major occupation is begging. Next are those who have no choice but to make the street their home. They have very occasional contact with their families and most of them have run away or lost their families.

Lastly are those who live on sidewalks or city squares with the rest of their families. They may have been displaced due to poverty, disease, war, or natural disasters. The families often live a nomadic life, carrying their possessions with them. These children work on the streets with other members of their families, either begging or selling various handmade items to fulfill their needs of daily bread and butter. In Pakistan, the government has not conducted a survey on this data and no revised figures of street children are available. There are a few NGOs in Pakistan that are worth a mention for having taken positive steps towards this issue, countrywide such as, Edhi, Behbud, Azad foundation, Sahil, but largely, nothing is being done.

However, if the government and NGOs are not doing any play, should we close our eyes too? This is the reason why the street children day is important for us. It is a day where we can play our part by acknowledging them. We can start by doing the least possible; playing cricket on a street corner with them, taking our guitars out and singing a song for them, skipping our daily fast food meals and buying them a meal instead, packing our old clothes and donating it to them – these are just a few gestures that could bring smiles to these desolate faces. So I request you all to lower your car window at a red light today and exchange a conversation with just one child – even if it is for a few seconds. If nothing else, maybe just give them a smile? It is the cheapest but warmest gesture.

We, as a collective community, need to realise that these children are children at the end of the day and all children want is love, attention, care, time, guidance and to be looked after. There is a reason why they tap on your car’s window, and it isn’t solely about that coin hiding somewhere in the far corner of your bag; it is the love and attention they demand.

We can’t be so ignorant to blame them entirely; it is the unequal distribution of wealth and lack of welfare in a country like Pakistan that is responsible for the plight of these children.

I believe what we have failed to do as a society, maybe and hopefully, we can still achieve it by doing so individually. So now I ask you again, what will you do on the International Day for Street Children?

A sophomore at NUST business school majoring in Economics and with interests in International Relations, Politics, Philosophy.

Holi: Anjali, you are as Pakistani as I am!