It’s about more than just a ‘fake’ degree 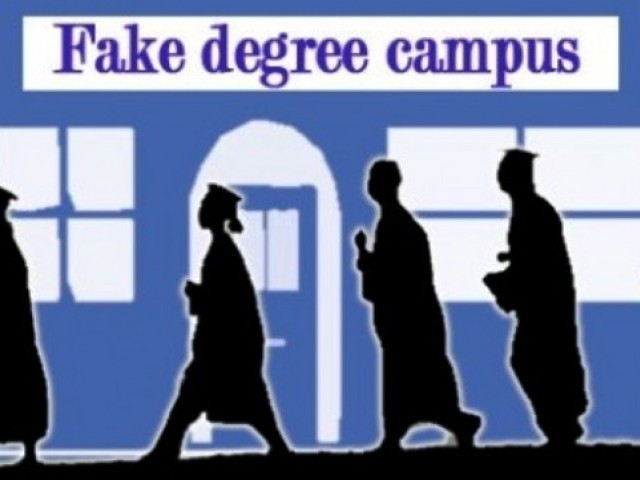 Those who lie, cheat and steal while entrusted with the future of the country lack the fundamental premise for being awarded political candidacy: character. PHOTO: FILE

It is almost refreshing to see the Election Commission of Pakistan (ECP) scrutinise politicians with fake degrees, unpaid bills and bank loans. While I am fairly certain that some of this scrutiny comes with a pinch of biased resentment, it is neither unwarranted nor undeserved.

Those who lie, cheat and steal while entrusted with the future of the country lack the fundamental premise for being awarded political candidacy: character. Justice cannot and should not operate with the childish notion of “but he/she did the same”, the fact that a selected few have been let off the hook does not absolve the rest from justified punishment.

However, it would also be worthwhile to ponder for a moment why fake degrees are a punishable crime.

The crime is that education is equated to a name on a paper.

The crime is that education is metaphorically slapped in the face when years of mental development are equated with a worthless fake degree. The crime is that through these actions, not only do the indicted cease to value education in its true spirit and form, they begin to advocate that it bears no value in “the real world”; a world where running a country does not seem to require the ability to read, think critically and make informed decisions not only regarding the day-to-day running of a country or constituency, but the progress that will determine its future.

With scores of parliamentarians being rejected based on having “fake degrees”, parliamentarians who promote this distorted view of education, it should come as no surprise that academic sources and organisations like UNESCO have repeatedly cited “lack of political will” as one of the key reasons for Pakistan’s poor performance in the education sector and its mediocre implementation of existing education policies.

To politicians who do not value education, it is of little concern that Pakistan ranks 113th among 120 nations in the global assessment of literacy rates, that the overall literacy rate hovers around a meagre 55%, that female literacy rates are a proverbial poster child for prevalent gender disparity when compared with male literacy rates, despite scientific evidence that increases in female literacy lead to measurable improvements in health and economic circumstances.

Despite promises of free education, politicians in Pakistan have continually refused to ‘put their money where their mouth is’; expenditure on education forms approximately two per cent of the GNP (neighbouring India spends twice as much based on that indicator).

What’s more, keeping populations illiterate actually serves political interests, because well, heaven forbid that people begin to empower themselves through education. It would be tedious indeed for politicians to guarantee voter banks in that awful scenario. Education is actively treated as a threat and consistently used as a political tool.

The issue here is not simply that of lying about having a fake degree; it is about failing to respect the value that the process of legitimate education provides and as a result, failing to advocate education as fundamental to the welfare and rights of every citizen.

It would be presumptuous and rather bigoted to declare that only those with a “degree” are in fact “capable” of running a country. After all, an abysmally low percentage of those with real degrees and ‘quality, higher education’ have stepped up to govern, having bequeathed politics to people with fake degrees and absent morals, only to complain about that fact later.

Even with supposedly educated politicians, allegations of corruption and insincerity are common. However, the actions of the educated are not an argument against the value of education itself.

Crimes that undermine the sanctity of education, if left unpunished, would irrefutably catalyse the destruction and progress of any nation, Pakistan included.

Fatima is a graduate student at the University of Southern California, and is passionate about using Communication Management as a medium for solutions to social issues. She tweets as @zahra7891 twitter.com/zahra7891

Talks with the Taliban and sleeping with the enemy

Elections 2013: Make it your decision, vote!

School,college,marriage,kids - is there more to being a woman?

With every Hazara you kill, you are killing a piece of me too