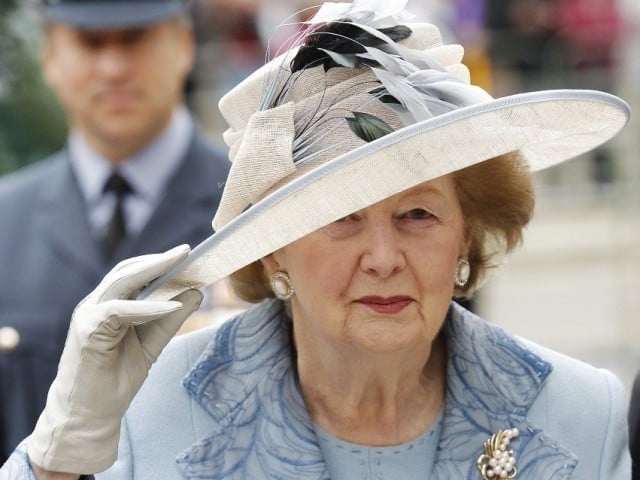 She will always remain a global beacon of hope, not only for the women, but for those who face adversity but remain true to their goals and never bow down to unjust demands. PHOTO: REUTERS

“If you just set out to be liked, you will be prepared to compromise on anything at any time, and would achieve nothing.” Margaret Thatcher.

Margaret Hilda Thatcher embodied these words. To some she was an icon of assertiveness and conviction, to others, she was just a bossy old lady.

Perhaps no other prime minister in the history of Britain has been loved and reviled at the same time as she has been, but that is who Margaret Thatcher was. To judge her on her political and economic beliefs solely would be to overlook her love for her country and her superhuman steadfastness to stick to any cause she believed was right in undertaking. Maybe this is what irks her detractors.

I am not a British national and she wasn’t my prime minister, nor does my country have any happy memories of her (remember her support of Zia’s regime?), so what compels me to write about her?

The simple answer is that our country’s leaders have much to learn from the life of Mrs Thatcher. In fact, below are a few lessons from her life that our next government should take note of and incorporate into its policies:

Margaret Thatcher was never one to shy away from unpopular decisions which she thought were for the greater good of the people. Whether, it was taking on the lethargic and unproductive bureaucratic apparatus or clamping down on the excessive power of unions, she withstood all assaults and intense criticism, and by the time she was forced out of office, she had taken Britain out of near economic collapse to a confident free market economy.

Many of our leaders had a chance to change our economy, make decisions that might have angered us at the time but could have saved our coming generations, but they didn’t. They rode on the wave of massive election wins, with heavy mandates and clear parliamentary majorities, but their love of power held them back from instituting desperately needed reforms, regarding discriminatory laws, land distribution, dam construction and so on.

2) Less government and more power to the people:

In her view the government should not legislate and provide for everything. She made the citizens stakeholders in policies, reduced the size of civil services to spend more money on basic amenities and set strict goals and targets for government agencies to achieve.

And what does our government do?

They increase the number of ministers and cabinet members and place no checks and balances on the funds being used for public services.

Perhaps the incumbent government might want to take a leaf out of Thatcher’s handbook.

3) Come out of our national delusions:

When Margaret Thatcher came into power, Britain was in shambles, it was on the road to irrelevance in the global scenario because it was still latching on to the memories of the once glorious empire. Of course, somebody was needed to shake them out of the resultant torpor and initiate reforms that were taking place in other economies. And she with an iron will and dogged determination achieved them, even though the odds were heavily stacked against her.

“The real thing about Margaret Thatcher is that she didn’t just lead our country, she saved our country. And we should never forget that the odds were stacked against her.”

And what is our situation?

We see the world as a menacing scheming, conspiring entity that is out to destroy Pakistan (as the ghairat brigade made us believe). This grand delusion has hampered our path to progress many times. We need a leader of Thatcherian realism to shake us from our collective paranoia induced lethargy and reassert us on the global map.

There will be a time to debate on Thatcher’s policies but now not the time to do so. Now is the time to take notes from her life and works, and integrate them into ours to better ourselves.

She will always remain a global beacon of hope, not only for the women, but for those who face adversity and remain true to their goals and never bow down to unjust demands.