None of these people represent me! Why can’t I vote ‘none of the above’? 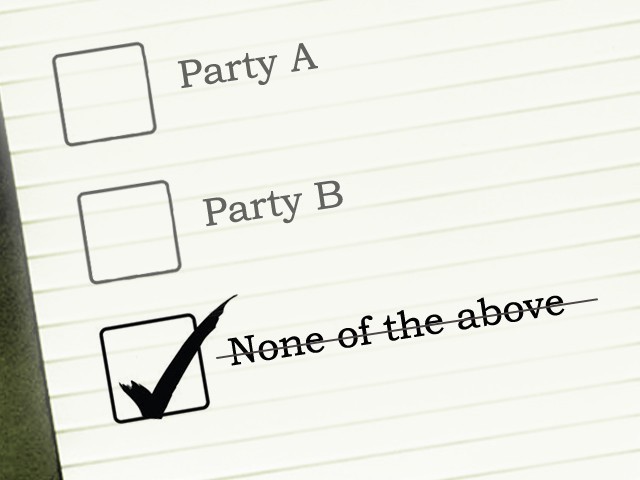 I would rather go to the ballot and tell the world that none of these people represent me.

You know what, Election Commission of Pakistan (ECP), I wanted to exercise the ‘none of the above’ option in my vote but you backed out by deciding against introducing it.

I don’t know, nor do I care if I was alone in rejoicing the commission’s decision to put in that option in the ballot paper, because for the first time, I thought I would go and vote my heart out.

I would rather go to the ballot and tell the world that none of these people represent me. This is so much better than just sitting back and not casting one’s vote at all.

For the first time, I thought I had a chance to vent my anger and my disagreement with the people for whom I was nothing but a vote, the people who would refuse to even recognise me after getting elected as my ‘representative’. No sir, this was not against the ‘system’. It was against the people who have been infecting this system, not letting it grow for decades.

Nor was it against ‘democratic norms’. Why would it be?

I have the right to reject anyone, or all who I believe are incapable of representing me.

Why would anyone, in a democracy, not let me reject all those who I believe were not even aware of my name, my needs, who do not share my problems and were least bothered to share them?

Some argued that run off polls resulting from more people exercising the ‘none of the above’ option would prove an extra financial burden. Sir, this is our money that is being spent on electing our future representatives, the people who we have to entrust with making laws for us to make our lives happier.

Let it be spent a hundred times until we get the right person. A wrong choice would deprive us of our hard earned money by corruption anyway.

Others, particularly the politicians who felt threatened by the ECP’s decisions, said it would be ‘anti-democracy’ and would undermine the politicians. They said no one has a right to reject in a democracy.

These self-appointed politicians need to know that more than ‘accepting’, it is the rejecting that people have the right to. So this time again, I will not vote because I do not want to vote for the ‘lesser evil’.

The market for conspiracy theories

What about the non-VIPs?