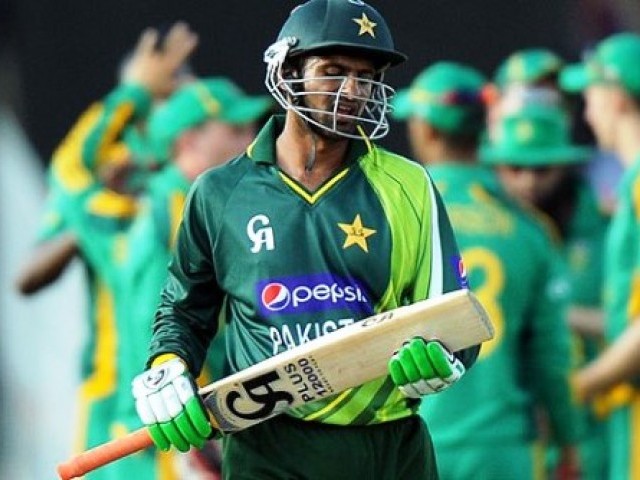 These batsmen struggle as soon as they are brought out of their comfort zone. PHOTO: AFP

Following the South Africa debacle, Pakistani batting has once again come under microscopic scrutiny. This, however, is not the first time the national team’s batting has faltered in the face of quality bowling and sporting pitches.

The experts are out to dissect the team’s batting performance; some are lamenting the absence of a specialist batting coach, some are unhappy with the team selection while others have pointed out the inadequacy of the country’s domestic cricket structure in producing world-class batsmen.

To be fair, I believe that our batting failures are a combination of all of the above, and more. Instead of going for quick fixes, the cricket administrators need to conduct a thorough study in order to identify the factors contributing to the team’s dismal batting and then devise a comprehensive plan to counter it.

Let us use this space to try and broadly understand the reasons behind the regular failures of Pakistani batsmen at the international level.

To start with, the youngsters at school and college level are brought up on a continuous diet of limited-overs cricket; a format not conducive to developing techniques. There are hardly any two-day matches taking place at school and college levels nowadays which means that these boys are not learning how to spend long hours at the crease to build their innings. Even club matches are getting shorter by the day as we see the various 20-20 leagues mushrooming all over the country.

Furthermore, the pitches used at the domestic level do nothing to hone the skills of talented batsmen. Paucity of grounds means that pitches in Pakistan get overused leaving most of them lifeless. The bowlers typically have it tough but the batsmen find it easy especially considering the fact that hectic international schedules and a general lack of respect for domestic cricket prevent the cream of our nation’s bowlers from taking part in these competitions; however, these same batsmen struggle as soon as they are brought out of their comfort zone.

Also, there are too many teams taking part at the domestic level which results in a lot of mediocre players finding their way in and this automatically brings the standard of cricket down. In addition, there is no effort from the administrators to create awareness about these games among local fans.

To make matters worse, there is no consistency in the format as a new one is introduced each year leaving even the diehard followers of the game clueless. All of this results in making these events irrelevant to the normal cricket fan and that is the precise reason we see domestic matches – barring the T20s – being played in front of empty stands.

In such a scenario, even the players find it hard to motivate themselves. As a consequence, they tend to freeze when, all of a sudden, they find themselves in front of packed houses at the international level.

Coming to the national team, the selection policy leaves a lot to be desired as the selectors seem to pick youngsters on the basis of talent rather than temperament.

Players performing consistently well at the domestic level are often overlooked in favour of attractive stroke makers having mediocre averages. In fact – over the past few years – a few of them have even been entrusted with the captaincy of the team as reward for their below par performances. Such moves only serve to promote mediocrity as the genuinely hardworking players no longer feel the need to go that extra mile and improve the quality of their own game.

The fact that many of the Pakistani batsmen are good enough to make 30s and 40s suggest that technique might not be as big an issue as their temperament.

Moreover, the Pakistan Cricket Board (PCB) needs to work on multiple fronts. At the grassroots level, it has to patronise and promote two-day and three-day matches that can provide the environment necessary for youngsters to develop their techniques.

It also needs to enhance the standard of domestic cricket by reducing the number of teams thus allowing only high-quality cricketers to play at this level. A standard and workable format has to be chalked out and these competitions have to be marketed to the general public.

This will enable fans to become more involved thereby bringing the desired level of intensity to these competitions. This will also result in players being motivated to look beyond their personal milestones.

Consistent performances over a period of time should be the sole criterion for selection in the national team. A raw youngster handpicked on the basis of talent alone tends to lose his appetite to work harder. He should be allowed to perform in match situations over a period of at least two to three years before being drafted into the national squad. This will make him value his place in the team even more.

PCB’s move to prepare ‘English-style’ pitches in preparation for the Champions Trophy might prove to be an effective tactical move; however, in order to ensure continual results, it should be made mandatory for every team competing at the domestic level to have its own ground and maintain sporting pitches.

With the national team playing non-stop cricket round the year, it is not a bad idea to acquire the services of a competent batting coach on a permanent basis as he can help the batsmen make necessary adjustments according to the changing surfaces and conditions.

At the same time, the PCB should encourage batsmen to spend a few months (each year) playing county cricket in England.

Despite the limitations of the system, Pakistan has produced some world-class batsmen over the years; hence, there is sufficient evidence to suggest that a concerted effort to raise the level of this particular aspect of the game can help Pakistan achieve sustained excellence at the international level.