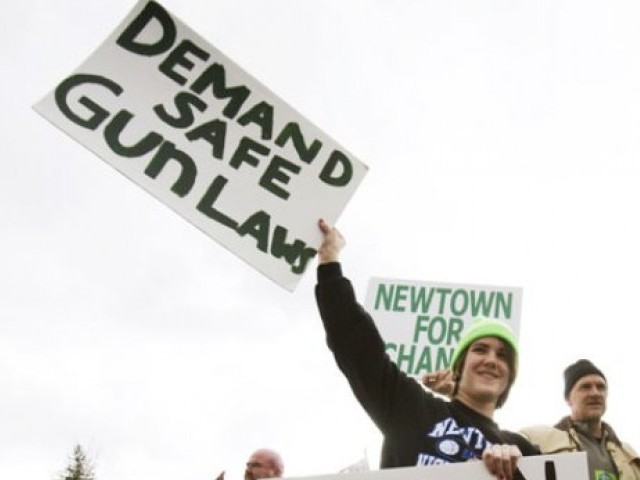 I am unabashedly for strict gun control laws. PHOTO: REUTERS

Sitting around in the ICU recently, I struck up a conversation with one of the nurses. We started talking about his new dog that he’s trained not to react to loud abrupt sounds, such as gunfire. He does this at range he shoots at.

I expressed interest in what kind of gun he uses being a bit of a self-touted gun enthusiast myself. He then went on to list about 15 guns that he owns, right from an antique short-barrelled musket to an AR-9 rifle, for which he recently bought an ACOG high precision scope!

Renewed debate regarding the need for stricter gun control laws highlights the polarisation that exists within the United States on this subject. Putting it far too simply, one group feels – logically so, in my mind – that the sale of weapons should be monitored, a background check should be mandatory and there should be certain restrictions on what kind of weapons one can go out and buy.

The other side however, vehemently opposes tougher laws and views efforts in this regard a violation of their constitutional right to bear arms as enshrined in the second amendment as well as a slight to their culture and heritage. This, as stated, is all too simplistic.

Polls indicate that factors such as possessing guns, living in rural America and being politically Republican are suggestive that you would take exception to the current push to control weapons. Whether for personal protection, hunting or simply as a hobby, many Americans feel that guns are a very normal part of life and for someone to question that is fundamentally unacceptable.

This draws parallels to Pakistan where in tribal and feudal culture, guns are ubiquitous, whether used to protect your land or celebrate at a wedding.

The current pro-regulation impetus comes from two high profile violent shootings in the past few months that of the movie theatre massacre in Colorado that killed 14 and the more recent Sandy Hook school shooting that killed 27; 18 children among the victims. Both tragedies were perpetrated by mentally unstable individuals and with assault rifles.

There existed a ban on assault weapons from 1994 to 2004; this was not renewed by the republican administration of the time and, as sensible as this sounds the current government is having a tough time passing it, or any substantial new controls.

States have taken it upon themselves to legislate for themselves but not everyone agrees on the way forward. While nearly a dozen states have enacted stricter regulations and requirement for owning/using a gun, some have eased their laws to enable more people to arm and “protect” themselves. And within Colorado, where the blood has only just dried, voices within the law enforcement community oppose tougher laws.

Contributing to this is the fact that the National Rifle Association is very actively opposed to anything regulatory as far as gun freedom goes. Their clout comes in part from sheer number of Americans that own/relate favourably to guns and perhaps more so from the millions of dollars with which they “contribute” to politicians’ election campaigns. Their current suggestion to counter gun violence is to have more people own guns and arm school staff – something not even acceptable in a violent setting such as Pakistan.

While assault rifle bans, mental health screenings and regulation of private sales may be pipe dreams at this time, the good news is that these are being talked about and on the horizon is that all parties may soon be able to agree on limiting the sale of high capacity magazines and on meaningful background checks. Some progress in the right direction at the very least but it’s going to be a slippery uphill battle.

I remember vividly being robbed in Karachi.

I owned a gun – a legal, licensed one unlike, I assume, the one placed against my temple – but did not have it with me at the time. I kept thinking of how I may have used it were it by my side, but no scenario would have ended well and I was lucky enough not to have been injured or to have to live with having killed someone.

I am unabashedly for strict gun control laws.

I went through the effort to get a license and the background check that goes with it back home, despite how much of a sham that was. I can relate to wanting to own a gun for any number of genuine reasons, but I see no logic in blocking the checks required to make ownership safer for all and to limit weapons in the hands of known criminals, terrorists and the like as well as the mentally unstable.