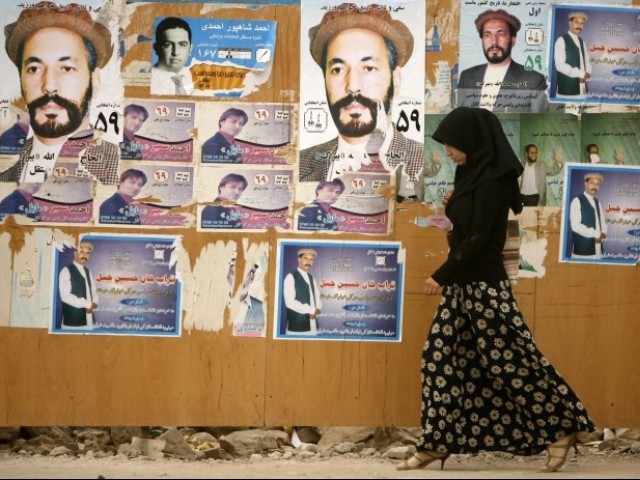 An Afghan woman walks past election campaign posters in a street of Kabul PHOTO:AFP

As most of urban and a large part of rural Afghanistan prepares for elections, the Taliban have once again made it clear just how they feel about the polls. With hours to go before ballots are to be cast the Taliban have kidnapped Abdul Rahman Hayat, one of 2,500 candidates running for the parliamentary elections on September 18, 2010.  The news was confirmed when Taliban spokesman Zabihullah Mujahid sent a text message to AFP reporter stating:

“We have kidnapped Hayatullah Hayat.”

The Taliban have also been blamed for the kidnap of eighteen workers in Baghdis province. It is no secret that the Taliban have been discouraging Afghans from participating in the polls.  On Eidul Fitr several mosques in Logar province reportedly received the same menacing message after the conclusion of Eid prayers. A young Afghan navigated through the sea of men to approach the mosque microphone and made an announcement from a  one-page letter:

If you want to be safe, don’t participate in the parliamentary elections, and convey this message to all who are not present here.

However, these high handed tactics have not managed to discourage young candidates from joining the race. Afghan election candidates includes a pop singer, comedienne and Olympic champion. This an interesting mix considering 60 per cent of Afghans are under 30 years old.

Three hundred of the candidates are women. The post-Taliban constitution allocates 68 seats in the lower house of parliament for women. Nima Surtagar running from Kabul is one of many to receive death threats. Speaking to Sify News she has said:

I don’t know who they are, but I keep receiving phone calls and e-mails from people who threaten to kill me unless I quit.

Most of these candidates are running as independents. Politics in Afghanistan is largely ethnicity or connection based – it does not rely on manifestos.

Interestingly there is an actual ideology based group in Afghanistan that has both support and opposition – but no political presence – the Taliban. Out of the 2,500 candidates who have been campaigning for 249 parliamentary seats in the election, not one is a member of the Tehreek-i-Taliban. In fact, the Taliban have a great deal to lose in these elections. The polls will determine how much political support President Hamid Karzai will have within his own government and as a result impact upcoming talks with the Taliban. If only the Taliban would cast their ballot today then perhaps they would not need to kidnap, threaten and kill. They could simply campaign and let democracy do the dirty work for them.