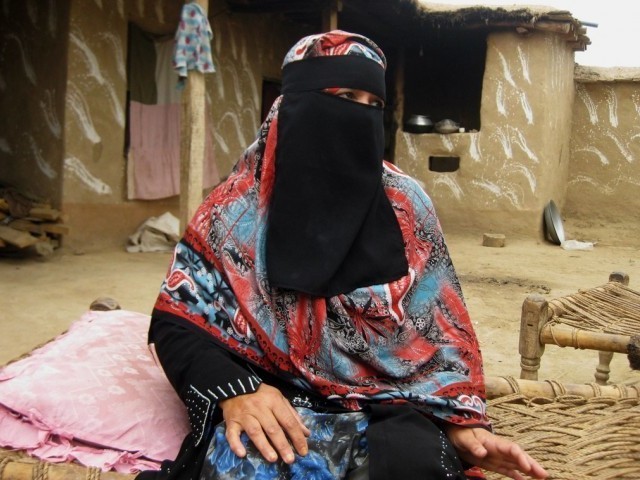 "I am contesting the election with passion, with a clean heart and a clear conscience. My passion is to educate the future generation, girls and women, and to serve them,” says Badam Zari. PHOTO: AFP

The much-vaunted democratic transition has taken place in Pakistan. Caretaker set-ups have settled in the centre and the provinces are to hold free and fair elections.

Similarly, candidates have also swung into motion, filing nomination papers, appearing before the Election Commission staff for pre-poll scrutiny and, most important of all, arranging funds for the election campaign.

However, one event stands apart, amidst the din and uproar, of the initial phase of the election campaign: A female candidate has filed nomination papers to stand for NA-44 constituency, falling in Bajaur Agency.

Badam Zari has made history by daring to move out of the confines of her home to contest elections in a male dominated tribal society.

Zari is a Pakistani housewife, who cannot read or write despite being married to a school teacher. Her father initially sent her to a school in the village, but when relatives objected and said it was inappropriate for her as a young girl to walk through the market to school, she was made to stay home.

Furthermore, social indicators (given in Table 1) of tribal agencies are poor as compared to average ratios for the rest of Pakistan; women are the worst affected as they are shackled with double constraints of patriarchy and low availability of development services.

The maternal mortality rate in Fata is 380 female deaths per 100,000 live births, which is higher than the national level MMR of 276 per 100, 000 live births. Another ancillary factor related to high maternal mortality rate amongst women, which probably emanates from paucity of schools as well as tribal custom of marrying girls at an early age, could be that the child bearing age  is highest amongst the 15-19 age group (11.9%) in the tribal areas.

Therefore, sex ratios in Fata also tend to be highly distorted as compared to national levels.

To top them all, tribal women slug away a significant portion of their time hauling piles of wood for fuel and carrying pails of drinking water for their homes (Table 3 shows that 95% of women are responsible for water needs of their households). Women also lack access to basic sanitation services, for according to MICS survey, only 28.1% of households use sanitary hygiene services.

Owing to lack of social services for tribal women, Badam Zari has affirmed to become a “voice for women” and strive to improve health and educational facilities for them.

For one, tribal women are discouraged to venture out of their homes to cast vote in the polling stations. Out of total registered voters of 180,000 for NA-44, women voters constitute 67,000, but as per dictates of tribal custom, many women, who otherwise would desire to vote for Badam Zari, might stay indoors rather than vote on the election day, or, if they vote, the choice of the candidate could be determined by male elders.

Secondly, as Badam Zari is making history by becoming first female candidate to contest elections in Fata, she would be hindered by lack of institutional networks such as female polling staff. And, finally, the Taliban would try to scare her away and thwart her campaign through violent means, in my opinion.

To beat these hard circumstances, Badam Zari must be provided exceptional security by political authorities of the Bajaur Agency, so that she can contest elections without fear and, eventually, become an example and an emblem of struggle for other women of FATA.

Then, we, who live on the mainland Pakistan, might hear true stories of brave tribal women and not just try to construct their lives through cold statistics.