Himmatwala: An unoriginal piece of disappointment 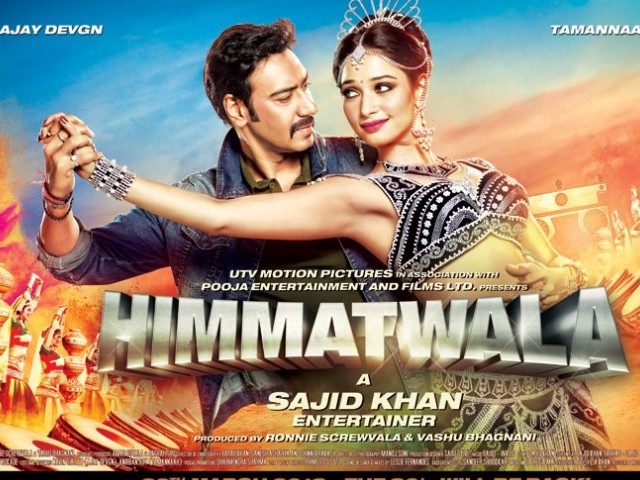 At least five action scenes from this movie reminded me of Amitabh’s movies. PHOTO: PUBLICITY

Before reviewing the new Himmatwala, allow me to introduce you to the original 1983 depiction of Himmatwala.

K Raghavendra Rao’s Himmatwala (1983) was an experimental film, in which he signed Jitendra, a sinking mega star of the early 1980s whose movies were slumping at the box office back in those days.

Similarly, Sridevi was signed because of the limited budget, as she was planning to leave the industry as her career, along with her movies, seemed to have plummeted. Kader Khan, who used to play negative roles, was not getting any movies either, but was signed on for this one.

The concept of remaking South Indian movies was very new at the time. So, all in all, it was their hard work and commendable script, along with astounding performances that made Himmatwala a success or just pure luck. I believe it was the former.

This movie was the reason the team of Jitendra, Sridevi, Kader Khan, Amjad Khan, Shakti Kapoor and Asrani, who were chosen, after the success of Himmatwala, to launch many other block-busters.

The sensation that this movie became was also reason enough to copy it – even after three decades.

Sajid Khan’s Himmatwala is a literal copy of the original Himmatwala.

He has been quoted stating that his depiction of the movie only has very few elements of the original one; however, if you have watched the original movie, you’ll notice that the dialogues, character names, scenes and the even background music is the same. There are minor amendments; unfortunately, these barely add any weight to the movie.

(Ajay Devgn in one of the fight scenes from Himmatwala)

If Sajid Khan says that this particular movie is a tribute to 1980’s cinema, then he should rephrase it as a tribute to the 80’s ‘angry young man’, Amitabh Bachchan’s movies.

The reason I say this is because at least five action scenes from this movie reminded me of Amitabh’s movies.

C – The scene where Ajay Devgn holds the dagger from the sharp end while saving his sister from ‘Dhanna’, reminds me of the scene from “Kaala Patthar” where Amitabh did the same with a character named “Dhanna” (played by Ashok Saxena).

E – The fight sequence just before the song “Bum Pe Laat” where Ajay converses in five different languages with the goons takes me back to a similar scene from Amitabh’s “Laawaris”.

The plot, as was in the previous version, tells us the story of a malicious Sarpanch Sher Singh (Mahesh Manjrekar) who defames Ravi’s (Ajay Devgn) father to an extent where he commits suicide and his family suffers a lot of pain. Years after, Ravi returns to take revenge from Sarpanch.

I am a fan of movies from the 70’s and 80’s and so, I naturally chose to watch the new Himmatwala. Unfortunately, I expected a lot more and this experience was painful to say the least.

(Sri Devi and Jitendra in Himmatwala 1983)

First of all, Ajay would not have been my first pick for the role- not even my fifth, if you know what I mean. He failed to grasp the wittiness in which Jitendra portrayed in his style. His “Atta Maajhi Sattakli” style seems to have gelled with and stuck to him.

Mahesh Manjhrekar is a very talented actor but he looks cheap and acts loud in this fare. If compared to the original work of Amjad Khan’s comical expressions and terrifying persona, his work was well below standard.

Adhyayan Suman does not even come close to Shakti Kapoor all through the film. Tamanna Bhatia (a renowned and successful Tamil actress) has screen presence, but when it comes to performing her focus on the role seemed lacking.

The only character that stands out (to some extent) in the movie is Paresh Rawal (enacting the role of Kader Khan). He manages to copy the appearance and tone of Kader Khan very well and in his dialogues you see the earnest attempts made in every scene.

Asrani is the only actor who appeared in both Himmatwalas but in the newer version, his talent was wasted. Ritesh Deshmukh appears in a cameo and he is as typical in his performance as usual. Zarina Wahab showed efficiency.

It is deeply unfortunate that a film with so many great actors and even super stars failed to create the magic that was created in 1983.

If you really want to get a heavy dose of some good cinema, you must watch the original Himmatwala. You’re not missing out on anything in this sorry excuse for a tribute.