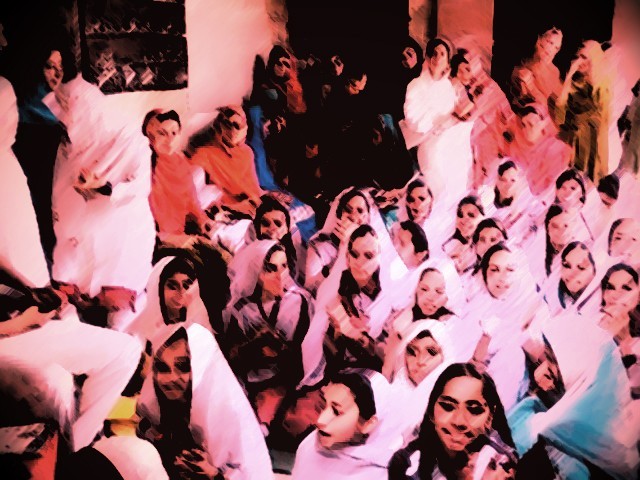 Would I want to teach - or get an education at the peril of my own life? PHOTO: EXPRESS/FILE

When Malala Yousafzai, was shot by the Taliban last October, there was a huge outcry all over the world about the dismal state of education for girls in Pakistan. It wasn’t the first time such an attack happened however, and unfortunately it is not the last.

Despite international awareness and pressure put on the government to provide girls a safe haven for education, we seem to be engulfed in violence where teachers, schools and students are attacked frequently.

Just days ago, a principal in Baldia Town in Karachi was killed along with several other children during a prize distribution ceremony. Even though no immediate response was claimed, it is widely believed that this attack was carried out by the Tehreek-e-Taliban Pakistan (TTP). It is really easy to blame the Taliban and local mafias for the attack, but equally tragic that investigations into such incidents reach no conclusion.

Terming it a terrorist attack is closure enough it seems.

A few days ago, a professor belonging to the Shia community was shot dead in Karachi. The only follow up we got for his brutal murder was that it was a sectarian attack and since he was killed for his belief he was, therefore, a martyr.

Is this enough? Labelled a martyr and forgotten?

More recently, Shahnaz Nazli a teacher in the Khyber tribal district was killed.

Fortunately her son — who saw the bullets pierce through his mother — managed to survive. Even though he survived, this incident will probably haunt him forever and many other teachers working in schools nearby. It makes one question the value of an education and its opportunity cost.

Would I want to get an education at the peril of my own life?

In January alone, seven other teachers were killed in Swabi, a place in Pakistan’s tribal areas. These killings are a constant reminder of the darkness that has plagued the future of this country. Killing a teacher is like strangling the future of many children. Student childhood memories are changing from being playful to painful. How unfortunate is that child?

The incidents mentioned above are all very recent. Between 2008 and 2010, around 22 teachers were killed according to the Human Rights Watch and yet again, nothing has been done. We have learnt nothing from our mistakes, from the previous lives lost.

There seems to be a systematic elimination of teachers and aid workers in Pakistan. Not everyone shot by the Taliban is fortunate enough to be treated in the UK and be made a national icon.

Those teachers, who risk their lives daily, deserve not only appreciation but security. They have families too; a life and a mission that needs to be protected, and this responsibility falls on the government. What the state has to do cannot be done by ordinary Pakistanis.

Keep in mind, this issue is not concentrated in the volatile tribal areas – it has spread all the way south to Karachi. Aside from teachers, polio workers and rescue workers are all being targeted with impunity.

As the rich and affluent find their way out of the country while those aiming to make a change are silenced, at times my future and that of the coming generation in this country, makes me shudder.

I am sorry Mr Policeman, you deserve better...