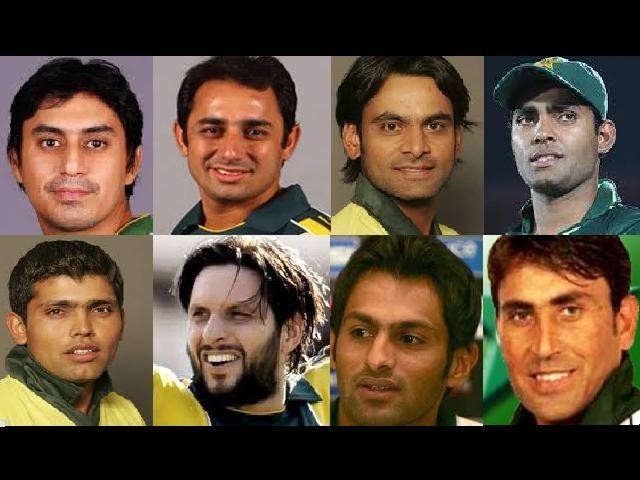 It should be a criminal offence to keep Nasir Jamshed, Umar Akmal, Asad Shafiq on the bench.

Pakistan needs a new One Day International (ODI) cricket team, and it needs one now. This can’t go on.

It should be a criminal offence to keep players like Nasir Jamshed, Umar Akmal, and Asad Shafiq on the bench. Nasir played the first three ODIs, Asad played only the first, and Umar played none!

There’s absolutely no way that Misbah or Whatmore or anyone within the Pakistan Cricket Board (PCB) and team management can justify the exclusion of the above players while Younis Khan and Shoaib Malik continue to enjoy a “no questions asked” run in the ODIs for Pakistan.

Umar Akmal is currently Pakistan’s top ranked ODI batsman and the only Pakistan batsman in the Top 20 of the ICC Rankings. Yet he fails to find a place in the team. In his last 20 ODI innings, Umar Akmal has scored 618 runs at an average of 36.35 with seven 50s!

How does anyone with that sort of record in the last year find himself out of the team?

Compare that to the last 20 ODI innings of Younis Khan and Shoaib Malik and one can’t help but curse Misbah and Whatmore for keeping Pakistan’s future on the bench and playing those who are well past their prime in ODI cricket.

The problem with both Younis and Malik is not a recent one, which is why it angers me even more to see them part of Pakistan’s ODI set-up.

Younis has never been a good ODI player. His test credentials are unmatchable, but as number three in the ODIs for Pakistan he has largely been a failure. A career average of 31 and only six centuries in over 250 ODIs for your country while batting at number three does no justice to a player of Younis’ calibre.

I reckon he should have left the ODIs a long time ago.

Malik’s is a different story. He has just not been the player that he used to be. Once an amazing ODI batsman for Pakistan, he seems to have lost the plot.

The last time Shoaib Malik scored anything more than 40 was his 128 against India in September 2009. That is his only fifty plus score in the past 3.5 years, and since then Malik has been an utter failure and deserves to be dumped into oblivion.

Misbahul Haq needs to move on

There is no doubt that Misbah has done a great job captaining Pakistan since the time he took over in 2010 right after the spot fixing scandal. However, this great job has been done in Test cricket.

It was a regressive step to make Misbah captain of the ODI and T20 team and take the reign away from Afridi. It’s been a regressive period for Pakistan’s ODI team ever since.

Misbah has played a tremendous role anchoring innings after innings in ODIs while wickets fall around him, however, he isn’t good for the ODI team. We need young and fresh legs, we need our future batsmen to be playing more ODIs, and we need to build a team that can be competitive in 2015 because no matter how hard Misbah tries there is no way he will be playing a World Cup at the age of 41.

Even if he was winning ODI after ODI for Pakistan, I would strip him of the ODI captaincy just for keeping talents like Umar, Asad, and Nasir off the bench.

Shahid Afridi’s time is over

I’ve been Afridi’s biggest supporter over the past decade and it’s very hard for me to say this but his time is also over. I have always believed that Afridi, first and foremost, is a bowler; whatever he does with the bat should be considered a bonus.

He has lost his magic charm and his ability to pick wickets regularly. He was the best bowler in the ODIs in the world for five years, but he no longer is. Age is catching up with Afridi and he doesn’t pose any threat to international batsmen anymore.

I know it will break millions of hearts to see Afridi leave the game, but I guess he can continue entertaining us in Pakistan colours in the T20s and in the various T20 leagues around the world.

Other players who shouldn’t play ODIs

Imran Farhat, Kamran Akmal, and Umar Gul are also players that need to be forgotten once and for all.

I fail to understand how Gul has managed to play for Pakistan for a decade!

He is at best a super T20 bowler, but in the ODIs and even in Test matches he has barely delivered.

Kamran Akmal is probably the most debatable out of all the players mentioned given that he has finally found some batting form, but we’ve kept him for much longer than we should have.

It is time to find and groom a new wicket keeper who is also an effective batsman.

Imran Farhat has hardly been an international opener. With openers like Nasir Jamshed and Ahmed Shehzad around, Imran Farhat should be nowhere close to the squad, let alone the XI.

Now let’s talk about players who should make up Pakistan’s ODI squad.

With Misbah out of the picture, Pakistan will need a new ODI captain; the obvious choice is Mohammad Hafeez.

Hafeez has shown that he can carry the bat with responsibility when leading the side. He showed that during the World T20, in the series against India, and the only T20 against South Africa. There is no doubt in my mind that he should lead the ODI team as well. He has ample captaincy experience and has been Pakistan’s most successful opener since the heydays of Saeed Anwar.

Jamshed is one for the future and I still can’t believe that Misbah and Whatmore decided to dump him after three ODIs against South Africa. He should open for Pakistan in every game and should be given the license to play his natural form of defensive cricket.

He paid the price for being part of the “Shahid Afridi camp” and has remained out of favour with Misbah, much like Umar Akmal. There have been talks about disciplinary issues and attitude problems, again like Umar Akmal, but he is too good a talent to be wasted because of all that.

Having made another comeback, albeit in the T20s once Hafeez became captain, Shehzad has shown us what Pakistan has been missing. There can’t be a better partner for Nasir than Ahmed Shehzad at the top of the order for Pakistan.

Azhar Ali has a very good ODI record and averages over 40 in the 14 ODIs that he has played for Pakistan. He is not an attacker but yet, he is extremely solid and Pakistan can do with his services; with Misbah and Younis out of the picture.

Azhar should be in Pakistan’s ODI squad as the reserve opener.

Umar is by far Pakistan’s best ODI batsman and has been for the past three years, while Asad was in the form of his life during the Test series against South Africa. How these two cannot make it to Pakistan’s playing XI is bemusing to say the least.

Haris Sohail was unlucky to leave the South Africa tour midway due to an injury. He has been the best batsman in domestic cricket for the past several seasons and deserves to be given a long run in the middle for Pakistan.

Sohaib Maqsood is relatively unknown but he has had a major resurgence as a batsman in the past season. He is a decent off spinner as well. Given the form he is in, Sohaib should walk right into Pakistan’s ODI team. In his most recent List A match he knocked his first List A century in a whirlwind knock off; 156 of only 95 deliveries including 10 sixes and 13 fours.

Hammad Azam  hardly got to play when he was part of Pakistan’s T20 and ODI squads, when he did he showed his immense talent, and then one fine day he found himself out of the team. His bowling requires a lot of work and it will develop with time. It is his hard to bat the way that Pakistan requires.

Hammad is the ideal batsman to provide the sort of impetus to the innings that the likes of Razzaq have in the past. His bowling is medium pace at best but he has the ability to pick up wickets regularly.

The other potential all-rounder that Pakistan will do well to invest in is Anwar Ali. The boy who rocked India’s boat in the U19 World Cup final back in 2006 had turned out to be quite a fine bowler and hard hitting lower order batsman. He’s got the potential to fill in the vacant all-rounder’s spot in Pakistan’s ODI line-up.

Abdur Rehman has found it difficult to get a game in the presence of Ajmal, Afridi and Hafeez. With Afridi moving on (hopefully), Rehman should be considered as a starting choice to partner Ajmal and Hafeez in ODIs.

Raza Hasan had an extremely impressive World T20, but has been out of commission due to injury since then. He needs to be promoted from T20 cricket to ODIs as well. Pakistan should focus on providing him with as much exposure as possible.

There is no argument over the fact that Junaid and Irfan are Pakistan’s leading pacers at the moment. I would seriously like to move on from Umar Gul, Wahab Riaz, Sohail Tanvir and Mohammad Sami.

It is time that Pakistan invests in these new pace bowlers and takes us back to the times when Pakistan’s pacers used to be feared all around the world.

This was the toughest person to pick largely due to the lack of talent on the domestic circuit.

What Pakistan need is a wicketkeeper, who not only bats well, but bats aggressively.

The reason I’ve gone with Muhammad Rizwan is because he’s only 20-years-old, has an impressive domestic record (average of 44 in first class cricket) and had the second highest number of dismissals in the Faysal Bank One Day Cup.

My ideal XI to start with would be:

Pakistan will play two ODIs against Ireland and two ODI against Scotland prior to the Champions Trophy, which is the ideal time to try out the new ODI combination.

It is time to invest in the youth!