PTI, ensure the safety of women if you want our support 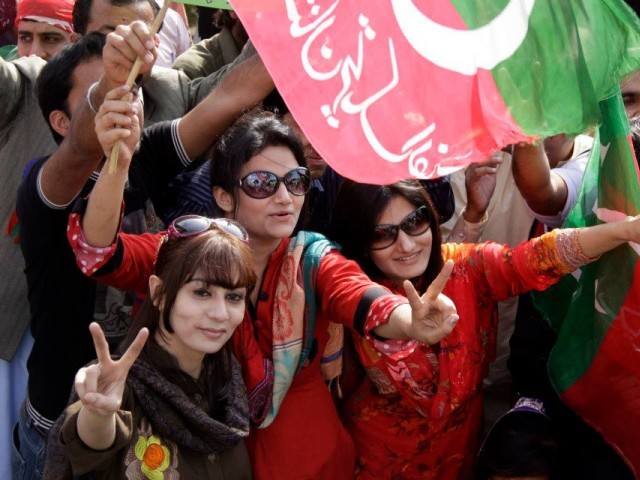 Pakistan Tehreek-e-Insaaf (PTI) under the chairmanship of Imran Khan held a massive rally at the historic Minar-i-Pakistan ground on Saturday, March 23, 2013.

While the gathering was immense and the jalsa proved to be a great ‘political success’, it left behind a trail of horror for some female participants. For them, things were not as pleasant as the telly reported.

The media showed only half of the picture — a huge crowd garnished flags and banners, colourful environment and cheerful painted faces.

Nobody cared to report the problems faced by some women at the jalsa, especially when it began to rain and the rally was nearing its end.

This political gathering was enough of an example to show how women are treated in our part of the world.

As we entered the Minar-i-Pakistan ground around mid-afternoon, we were pleasantly greeted with the sight of an organised queue for women. The guard was heard addressing men to give way to the women.

It was all very cordial and disciplined. At this point, I heard a middle-aged woman in the queue saying:

“This sort of respect for women is only given in Pakistan and nowhere else in the world.”

As true as it might have been at the time, the statement lost all its validity by the time the jalsa came to an end.

During the chairman’s speech, heavy rain poured down, accompanied by strong winds.

Lightning struck and a state of fear took over the crowd at the Minar-i-Pakistan ground. People started moving away from the main ground towards their cars and rented buses.

Mobile networks were shut off so communication was impossible.

The rain had made many women’s clothes translucent and they were having trouble covering themselves properly. Many women were separated from their families during the stampede as the participants hustled though the crowd, pushing each other in all directions.

Some men took advantage of the situation and sexually abused women.

It was dark and women feared they’d be separated from their families. Most did not even respond to these mentally sick brutes in the confusion, and out of fear of violence.

The men grabbed, touched and brushed past women, some purposely pushing themselves into girls while others were even seen clinging on to them.

They hurled abuses and harassed girls present at the jalsa.

Some women approached the policemen standing nearby complaining of the ongoing harassment. Helpless, due to the lack of light and communication, the police gave the women PTI flags so they could use the sticks to protect themselves.

The irony of this is beyond me.

Many women were seen crying in fear while most men laughed and enjoyed a “free show”.

Seeing this made me wish we had better police. It made me envy the West for having a police force that is determined to make everyone feel safe – man or woman. The experience left many women traumatised and I am sure most of them will never want to attend a political rally again because the fear of being sexually harassed will always play in the back of their minds.

Women came to this jalsa to show their support for their political leader and be a part of the voting process. The least that was expected was that the party would ensure their security and well-being.

Imran Khan’s slogans and endeavours for “change” will never bear fruit if things like this continue to happen.

I don’t know what it will take to change the mentality of the people in Pakistan, but perhaps once that has changed, we can make progress towards other kinds of changes.

A student in Lahore.