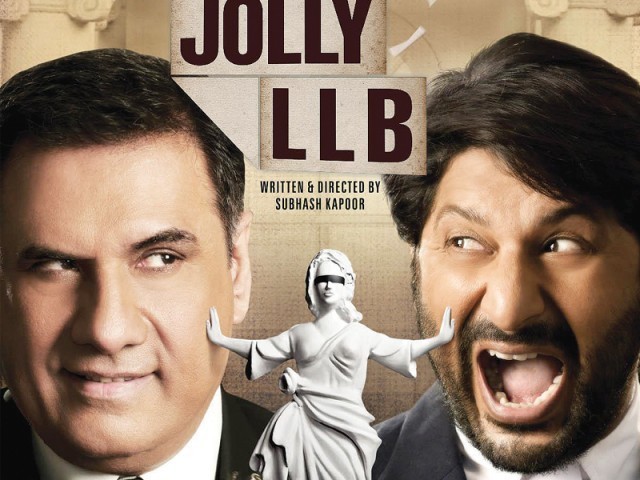 Jolly LLB has great screenplay and dialogue, kudos to Subhash Kapoor for maintaining his command over these departments. DESIGN: S ASIF ALI

Movies based on the judicial system and courtroom dramas have always been admired by cine-goers.

It’s not because the audience loves their favourite actors and actresses in black gowns, it’s merely because most of the courtroom scenes are penned exceptionally.

Jolly LLB is also one of them. It is based on a real life case with a few amendments.

Subhash Kapoor, a talented entertainer, brings Jolly LLB in front of his viewers in a way that is comical. Yet, on introspection, it is a serious movie with light hearted and situational comedy.

Similar to his earlier movie Phans Gaye Re Obama, Jolly LLB also deals with day to day life experiences which one comes across frequently.

The strongest points of this movie are the first rate acting, the script and simplicity.

The plot of the movie is simple; Jolly (performed by Arshad Warsi) a suffering lawyer, leaves Meerut and arrives in Delhi in search of more cases and professional growth.

Luckily, he comes across a case, one which was hyped by the media, and won by Rajpal (Boman Irani) who only manages high profile clients with surety to win the case. Jolly, to earn fame, files a Public Interest Litigation (PIL) claim against the same case and that is the point at which his life changes.

As far as the performances are concerned in this movie, everyone excels and shines no matter how large or small he/she has been projected as in the movie – everyone is a star!

Arshad Warsi stands out undeniably. For those who remember him as “circuit” from Munna Bhai MBBS, this movie serves as a reminder that he is an equally talented actor when it comes to serious and performance oriented roles. It is great to see that he has now started to sign movies which offer him different kinds of roles, much like the previously released Zilla Ghaziabaad.

Boman Irani is easy and flexible; he is able to manage any role that is assigned to him with comfort and ease – all traits of a good actor. His character demanded an egotistical, cunning and bullish portrayal and he mastered them all.

Saurabh Shukla (as Sunderlal Tripathy) is one of the finest actors you will ever come across. In this movie, there are plenty of scenes where he shows his viewers that he is not less than any other accomplished actor of the industry. In the scenes where he is silent, his expressions speak loud and proud. After all, actions speak louder than words!

Amrita Rao (as Sandhya) has a small role, but when it comes to dramatic enactment she has always excelled, as she does in this movie.

Ramesh Deo (one of the veterans – from “Anand”) is first rate, though he only has a few scenes in the movie, they definitely make an impact.

Brijendra Kala as advocate and Sanjay Mishra as Hawaldaar Ram Gopal Verma have acted well in the capacity of their roles and the same goes for Mohan Agashe.

Jolly LLB has great screenplay and dialogue, kudos to Subhash Kapoor for maintaining his command over these departments. “Ajnabi” and “Makhna” are two sing-along-songs that I truly enjoyed and can’t get out of  my head!

My rating for this movie would be an easy eight on 10!