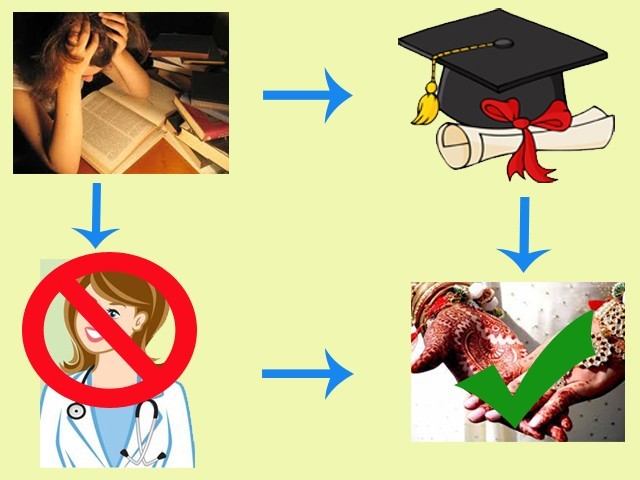 Was it fair to demand equality without accepting the responsibility that comes with it?

Pakistan is now producing more female doctors than male ones and it is not a good sign.

According to some of the senior doctors and medical staff, Pakistan’s health system had won the gender equality battle at the cost of productivity. More women are now pursuing medicine, as compared to their male counterparts, which is affecting the health system adversely since a large number of women abandon the profession after completing medical school.

Due to the open-merit system introduced by the Supreme Court in 1991, which abolished the 60:40 ratio for male and female students in medical college admissions, men and women now have equal opportunity in the field of medicine. Due to merit-based admissions, women tend to secure a larger number of seats in medical schools and outperform their male colleagues. But the problems begin once med school is over.

Most young women either bid farewell to medicine completely after securing a degree or choose to work in selective fields such as pediatrics, gynecology and radiology etcetera. There is also reluctance towards working in far-flung rural centers, emergency departments and doing odd hours due to familial obligations, security concerns or both.

According to these doctors, the dangerous repercussions of the Supreme Court’s decision were being felt more than a decade later, and if immediate action were not taken to reverse or curb this trend, the health system in the country would collapse completely in the next 5-10 years.

When I heard this, the woman in me overpowered the reporter for a few fleeting seconds.

I mentally worked out a few quick retorts on the success ratio, multi-tasking abilities and over all challenges of being a working female professional in Pakistan. But some thing more powerful than my adherence to journalistic objectivity held me back from making that argument.

Was it fair to demand equality without accepting the responsibility that comes with it?

Was it justified to make discrimination claims when some one who went an extra mile got promoted while you operated from the confines of your comfortable domain?

Was there room in successful women’s careers to dwindle between being a powerhouse and the fairer sex on a situational basis?

The answer was a crystal, clear no.

Women in every field had worked too hard for too long to allow their gender to be an excuse in their career growth anymore.

Every female doctor who chose not to practice medicine due to personal reasons not only drained the national resources but also added to the stereotypes and doubts that already inundate those who are struggling day and night to prove themselves. And a critical look around would reveal that the problem was not limited to the field of medicine.

Countless of my own female peers have taken refuge in the more flexible professions, completely discarding their privileged education in business, law, medicine and even journalism in certain instances. Between those working for a living or according to convenience, we have lost out on those who work for the pure, unadulterated joy of loving what they do.

The question here is not of more or less equality for women, since that has been debated far too many times. Instead, what is needed is a moment of self-reflection for every woman. Do we at times get so preoccupied with the rhetoric of being treated as equals that we forget our end of the bargain.

Somewhere along the line, had we won the battle for equal opportunity and recognition, but lost perspective ourselves?

I think it is time for women to stop choosing fields just because they were more ‘manageable’ or ‘acceptable’ or ‘flexible’. It is time to stop treating careers as a ‘luxury’ that can be subtracted as soon as families, husbands, in-laws or household chores are added to the equation.

Instead, it is time to choose vocations that are born out of passion– work that drives you to the very edge of your potential and yet makes you want to go through the grind again and again.

Do not accept, or even worse endorse the limitations set on your potential by conventional norms. Because, if so many other women could do it, so can you. And because, the worst form of discrimination against yourself is the one that emanates from you.