What Imran Khan and the March 23 rally will bring us 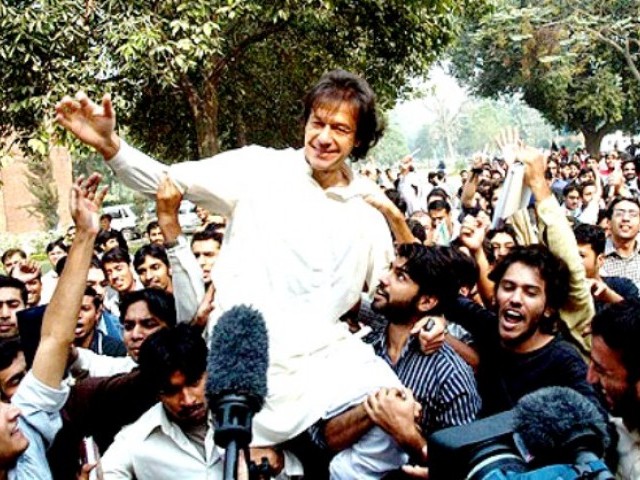 I’m predicting the rally tomorrow to be one of the largest, if not the largest ever rally in the history of the country! PHOTO: REUTERS

The importance of the coming elections cannot be overstated. Pakistan today stands on the point of implosion and the kind of leadership that is elected to take the country forward could make or break it.

My loyalties in this matter lie with the Pakistan Tehreek-e-Insaf and I’m writing this to present my reasons for handing the party my vote and what I think you should expect tomorrow at Minar-e-Pakistan.

When a party is democratic then it is full of elected position holders. This means the leadership has integrity and mandate. More importantly it means they have more pressure to deliver because they would, in the future, have to fight for their position again. An elected leader has the power of command and respect which a nominated leader does not.

The leadership has declared their assets and uploaded the information to the party’s website.

Pakistan’s administration is full of corrupt, tax evaders. This gesture therefore is unique and very praiseworthy. Pakistanis are amongst the highest payers of charity and the country has one of the lowest tax to GDP ratios. This dissonance can only mean that people are not inspired to pay taxes because of a lack of trust. I don’t really blame the people either.

Who would pay their taxes when 70% of our parliamentarians do not themselves pay, and when no sign of efficient and productive use of tax payer’s money has been shown?

This again is, and was unprecedented in Pakistan. Calling an education emergency and trebling the budget for education were refreshing announcements. It was also heart-warming to hear policies on neglected issues such as the environment and disabled people.

Commitment to harmony and equality.

When the Ahmadi place of worship was attacked three years ago, Imran Khan visited the injured in the hospital and vowed to stand by the Ahmadis, protect them and end the power of the state to decide if certain sects could be counted as Muslim or not.

A few days ago Khan visited Joseph Colony in Badami Bagh where hundreds of homes of Christians had been burnt by an angry mob. The PTI is the only party to stand by the defenceless minorities in Pakistan. Be their philosophy religious or ethnic.

Impressive personalities that are a part of the team.

Asad Umar resigned as chairman of Engro in April 2012 to join the PTI. Umar worked for Engro for 30 years and transformed the firm from a mere chemical company to a giant conglomerate. He left his position at Engro where he was the highest paid CEO in the country at a salary of almost Rs6 million a month – to work for the betterment of Pakistan with the PTI. In 2010 he received the Sitara-i-Imtiaz for his business achievements.

Another example is the appointment in May 2012 of Azeem Ibrahim as the strategic policy advisor. Ibrahim holds a PhD from Cambridge and has served as a scholar at Harvard and Yale. He was named as one of the Top 100 Global Thinkers of 2009 by the LSDP European Social Think Tank and has advised over half a dozen world leaders.

The PTI is the only party to comprehensively address the situation of terrorism in Pakistan and provide a solution. Eight years of military action have only succeeded in creating more militants because the root causes of the issue have never been looked at.

Disengaging from the US war on terror, hence ending the Jihad narrative used by the terrorists to recruit displaced and homeless tribal locals looking for revenge, will help isolate retaliating Pashtuns from hard core terrorists who would be eliminated by force. The PTI addresses the issue, identifies the complexities and elements involved and presents a solution. Its competition in this matter is non-existent.

The best part of Khan’s life has been nothing short of selfless service to Pakistan. He chose this life of struggle over a life of luxury. His philanthropic works in addition to his sporting achievements makes very few Pakistani’s doubt his intentions, integrity and ability. In comparison we have criminals, corrupt officials and fundamentalists.

With the Tehreek-e-Insaf’s intra party elections taken care of and the organisation complete, it is time for a show of power.

PTI rally at Minar-e-Pakistan on March 23

I’m predicting the rally tomorrow to be one of the largest, if not the largest ever rally in the history of the country!

There will be people from every walk of life, every segment of society, every religion and every ethnicity Pakistan has to offer. The rally is going to be one of the rare moments that a true representation of Pakistan’s society will stand in unity and with purpose. Tomorrow is going to be the beginning of a short movement that will be remembered for ages as the tipping point of Pakistan’s politics. Tomorrow is going to be a day of pride, patriotism, optimism and most importantly hope. Tomorrow will give every Pakistani hope and maybe if nothing, that’s what the Tehreek-e-Insaf can offer you. The hope that it’s not too late, that you have the power to change everything and that Pakistan not only has a future, but a bright one.

The fourth week of March is a historic and spiritual time. The Persian New Year and the spring equinox both fall in this period. This is known as a time of new beginnings, where the cold dark sadness of winter ends and is replaced by the emergence of blossoming flowers and the sunlight of spring.

God-willing March 23, will be the beginning of the road towards a new Pakistan.