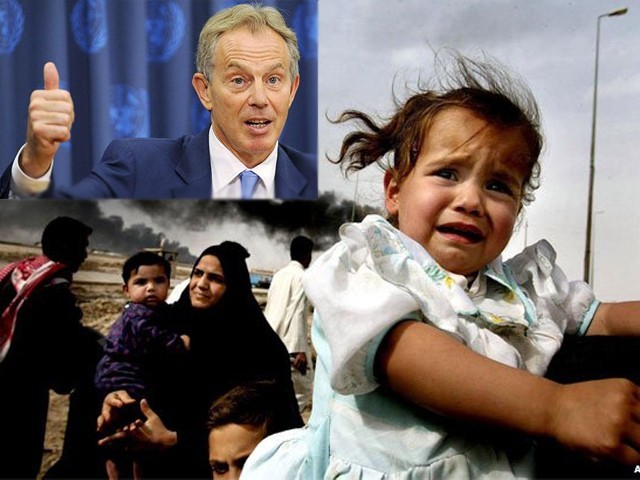 In an ideal world I, like many, would like to see both Blair and Bush tried for war crimes in an international court.

When former British Prime Minister Tony Blair proudly proclaimed on BBC News that he had “no regrets” about the war in Iraq 10 years on, I was so disgusted, I had to switch the television off and try to calm myself down.

In these 10 years, over 600,000 civilians have been killed, a civil war ensues and no so-called weapons of mass destruction (WMD) were ever found. I must highlight that people died on both sides. Despite whatever opinion we may have of US troops, 4,488 American soldiers and marines were killed and thousands were left with severe disabilities in the aftermath.

Tomas Young, a veteran paralysed by injuries sustained while serving in Iraq and now on the brink of death, wrote a personal and heart breaking letter to George Bush highlighting the horrific realities of the US-led invasion.

“I write this letter because, before my own death, I want to make it clear that I, and hundreds of thousands of my fellow veterans, along with millions of my fellow citizens, along with hundreds of millions more in Iraq and the Middle East, know fully who you are and what you have done. You may evade justice but in our eyes you are each guilty of egregious war crimes, of plunder and, finally, of murder, including the murder of thousands of young Americans -my fellow veterans – whose future you stole.”

It is fair to say that Bush and Blair’s war was, in fact, based on a big lie.

The constant fear reiterated over and over about Saddam Hussein’s chemical weapons programme being deployed – a public relations strategy used to try and win over support for this illegal and preemptive invasion failed to convince the masses, yet the “coalition of the willing” still went ahead.

At the time, we took to the streets all over the UK and marched in thousands chanting “Not in our name Mr Blair,” in the biggest anti-war demonstrations Britain has ever seen. But our prime minister didn’t listen. Our taxpayers’ money was going to be spent on a war we didn’t want.

What was the real reason for this war?

Was it 9/11 even though Iraq had nothing to do with the twin tower attacks?

Evidently American company Halliburton couldn’t wait to get its fingers deeper in the black gold of the Middle East. Or, was Saddam Hussein really a danger to the west and its allies?

Saddam Hussein was a hero to some, but a tyrant to others. Who can forget how he persecuted Shia Muslims and more notably, when he gassed thousands of Kurds in Halabja with chemical weapons. Images of dead children from the 1988 massacre should have been enough to try the Ba’ath party leader for war crimes.

When I ask Iraqis if their country is better off since foreign troops touched the ground, opinions are varied. But a vast proportion agree that Iraq is now worse than it has ever been.

A corrupt puppet in office (Nour al-Maliki), that discriminates against Sunni Muslims, further poverty and sectarian violence at its peak has crumbled the country and proven costly to America, which spent over $800,000 billion so far.

For me, one of the most saddening things about Iraq is the post-war effect. Fallujah was at the centre of the US and UK military campaign and now, more than half of the babies conceived after the foreign invasion are born with deformed and missing limbs, brain damage, tumours and heart defects.

These innocent children were born into an uncertain country because of Bush and Blair.

Iraqi babies will continue to grow up suffering the side effects of depleted uranium weapons used to bomb their towns.

What about Tony and George?

Where are they now?

After standing down as prime minister, Tony Blair, for reasons I still cannot understand, was appointed as the UN Middle East peace envoy, which is like pouring salt over a wound.

Shipman, who he referred to, was one of the most prolific serial killers in UK history.

George Bush, whose idiocy was synonymous to that of a clown while in office now enjoys a “low key” role in charitable organisations, but his past actions will never be forgotten.

Ten years on, a BBC correspondent walked calmly through Baghdad’s book market, telling viewers that filming openly would never have been allowed during Saddam Hussein’s time. In this particular news package, a free democracy was portrayed, all of which is not true in my eyes.

I see a country ruined because of a pointless war that will take decades to fix.

After British and American troops withdrew from Iraq, there was no triumph or victory. What is there to celebrate?

During the same BBC interview, Tony Blair suggested that there should also be military intervention in Syria. I kept thinking, doesn’t he have enough Arab blood on his hands?

In an ideal world I, like many, would like to see both Blair and Bush tried for war crimes in an international court. This is the only positive thing I can hope for.

Motown producer Norman Whitfield famously wrote the song War to protest against the US campaign against Vietnam back in 1969:

To thousands of mothers eyes

When their sons go to fight

And lose their lives

What is it good for

These lyrics will always be applicable before Iraq and after.