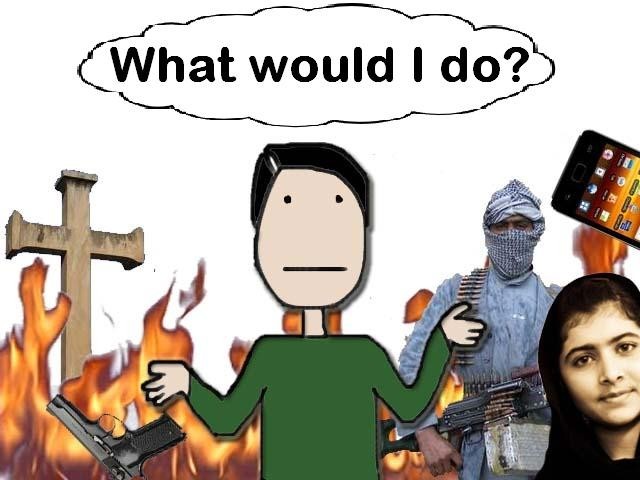 I think now would be the right time to find out how infected we each are with the ‘extremism’ virus on a personal level. DESIGN: IMAAN SHEIKH

Hi everyone, it’s been ages!

I was recently looking through my old blog posts and reminiscing about all the fun that was had with my quizzes for Pakistanis:

What kind of Pakistani life do you lead?

Given how 2013 has kicked off with more terrorism and extremism-related incidents than any year I can remember in my short lifespan, I think now would be the right time to find out how infected we each are with the ‘extremism’ virus on a personal level.

Take the quiz below!

Q1: The Christian neighbourhood next to you has been burnt down to the ground due to alleged blasphemy by one of its residents. You think…

A: This is horrific. Anyone committing blasphemy should be punished severely, but not the whole neighbourhood!

B: This is horrific. This is an outrage. This is a terrible consequence of the man-made blasphemy laws that are a terrifying by-product of our colonial history. Shame on us as a nation!

C: Look, someone committed blasphemy, so naturally people’s emotions were inflamed resulting in the damage. This should be investigated and the blasphemer punished severely.

Q2: Child activist Malala Yousufzai has announced she is returning to Pakistan to begin a peaceful campaign focused on education as a means to empower women and end extremism. You think…

A: Great. I thought we were done with this drama. I bet this foreign agent is returning to begin her work to spoil Pakistan’s image, now with tonnes of security that I will be paying for – or maybe the Central Intelligence Agency (CIA). This sucks.

B: Great. Doesn’t Malala realise she is just causing trouble by coming back? She should stay away for Pakistan’s good. Why does she need to come back if she’s such a big star abroad anyway?

C: Great. She is our true hero. I worry for her safety though. I fear the extremist elements in Pakistan will try to kill her again. She is my symbol for hope.

Q3: You are in the streets when a stranger presses a gun into your back and demands you hand over your wallet/mobile phone/purse. You do so but the robber (a 17-year-old) is an amateur and he creates a ruckus. He is caught by the enraged public, who are hitting him with nearby iron rods. Someone hands you a rod too and pushes you in. You…

A: Skip the rod but stand around to watch the public thrashing. Delight in justice served.

B: Beat the man to a pulp with the rod along with the crowd. Hopefully this thrashing will be a lesson to all. It’s not like the police would ever mete out justice.

C: Skip the rod and try to break up the crowd. Try to call the police to stop this thrashing from turning into a lynching.

Q4: There has been a new report of a gang rape in India, bringing international condemnation on your neighbour. You go on social media and news sites and…

A: Comment on how India is so much worse than Pakistan, say how people in India are despicable and try to hide the glee as you take down your enemy!

B: Comment on how Pakistan is better at protecting its women than India.

C: Comment on how despicable rape is. Condemn this tragedy.

Q5: You are at a family dinner party when your aunt says she wishes all Pakistani politicians were blown up or shot – that would solve 90% of Pakistan’s problems. Most people murmur in agreement but one of your cousins says her friend’s father is a politician and she would not like to see him shot. You say…

A: We’re not talking specifically about your friend’s father, but more generally about politicians. Some of them do deserve to be blown up or shot.

B: No one deserves to be blown up or shot. What a terrible thing to wish on someone whom you do not know and whose crimes you probably have no proof of beyond hearsay.

C: Do you know how corrupt your friend’s father is? He’s probably 100% scum under his smile – go find out! He deserves to be blown up or shot for sure.

Q6: A famous singer is in a new TV campaign saying Pakistan’s text books are teaching a skewed history to children, spreading hatred towards minorities. You think…

A: Another pseudo-intellectual celeb trying to act smart by dissing out Pakistan with our shameless, sold out media – how lame! Bet this whole campaign was funded by the US to muddy our name and start distorting our history. Pakistan zindabad!

B: None of my history books in school had any distortion of history or taught hate. I don’t buy this.

C: Good job, singer X! Finally someone is exposing the dangerous propaganda that is being taught to many students in schools and *shudder* madrassahs in Pakistan.

Q7:  You see a Pakistani girl at the Jinnah International Airport, Karachi, wearing a short skirt! Men are leering/frowning at her. Women are looking at her with shock and disapproval. The girl however seems to have not noticed, or is ignoring, the impact her attire is having. You think…

A: This girl is shameless. She is inviting all these stares. Someone should tell her off for this disgusting display, or give her a tight slap. She is asking for it — sl**.

B:  This girl is oblivious! Someone needs to go tell her this kind of attire is not suitable in public.

Q8: The Tehreek-e-Taliban Pakistan (TTP) says they want to have peace talks with the Pakistan government. They say dialogue is possible, but they will not lay down their arms first. You think…

A: Are you kidding me? This insane group of terrorists are brutally killing Pakistanis daily and we should talk to them? That would be cowardly, pathetic and a disgrace to memory of thousands who have died at their hands. Besides, we tried peace talks and the Taliban are proven liars.

B: Peace talks are a good idea, but I’m not sure the TTP can be trusted. It would be a good idea to pursue this further though, because they have a point of view that needs to be heard.

C: Talks are the only way forward! This is a positive sign from the TTP and the Pakistan government should pursue this at all costs. It’s okay if they don’t lay down arms right now, they may later – and it’s not like our corrupt government has ever stayed true to any promises, so let’s just get everyone on a table.

Congratulations! You are much of what is wrong with this country today!

Your thoughts and actions are fuelled by a black and white, rather insane perception of reality. You love conspiracy theories and buy into propaganda with ease. You can easily be sadistic in the name of ideology or personal gain. Your viewpoint is really not that different from the average Taliban.

You tend to hate on lots of things, and an enemy is a much-needed part of your messed up world view. You are also most likely a man! Print out/share this quiz and your results and ask your family and peers how your high score makes you an extremist, because buddy, you are too warped to understand why by yourself.

Congratulations! You are a rookie extremist who helps build the ground for real extremists to act in!

You are almost as messed up as your Pakistani extremist counterpart, if not worse, because you’re more of a hypocrite than he/she is. Your messed up world view may sometimes be perceived as ‘okay’ by some, but your answers belie a very dark, ugly viewpoint.

Just like the extremist, your ideological space is mostly black and white, hypocritical (think: enlightened moderation), but remains hidden under a thin veneer of political correctness or possibly some common sense you heard once.

You may not be Taliban material, but your local extremist-outfit-with-a-softer-outlook would be willing to embrace you. Yes, that also includes that crazy dars thrown by that society aunty!

Score of 40-90: You’re on the extremist/non-extremist fence!

Congratulations! You’ve got a touch of extremism in you, but you’re sitting pretty for now.

Not too bad, my friend! Given the environment we live in, this is actually a decent score on the extremism scale. Sure you may occasionally be overcome by the ol’ “us versus them” or the odd ultra-nationalist tendencies, but it’s rare enough for you to be forgiven, given the circumstances. Scroll back up and see which questions you scored high on and consider whether that’s how you would think/behave in a different country.

Congratulations! You are probably the only hope this country has!

The (few and far between) extremist tendencies you have are locked away, in control and will hopefully stay that way! You are the Taliban’s and the Pakistani extremist’s worst enemy. You are rational, sensitive to issues and are blessed with the ability to think critically –your parents probably raised you right (or you were born into privilege)!

Now let’s just hope you do something with the clear mind and values system you have been blessed with – especially when dealing with your buddies above!

What kind of Pakistani life do you lead?