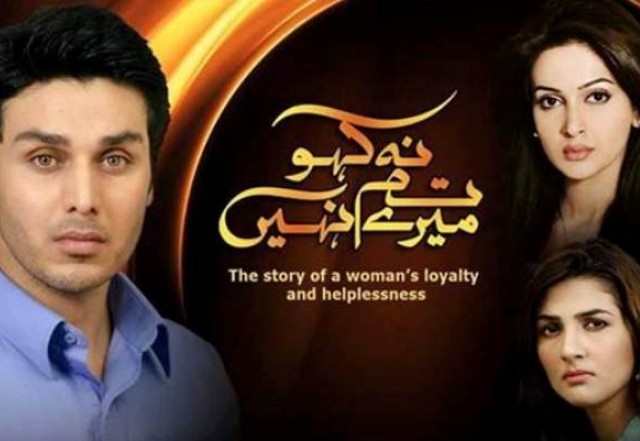 I hate the fact that drama serials just capitalise on women’s emotions and their tendency to watch serials that they can relate to. PHOTO: http://www.facebook.com/Na.Kaho.Tum.Mere.Nahi1

Na Kaho Tum Mere Nahin (NKTMN) – a drama serial on Hum TV that aired its last episode in the beginning of March – was a clichéd story of marital infidelity and domestic problems.

The plot was straight forward – a husband and a wife and their two children live a peaceful life in a blissful house until they come under buri nazar ( the evil eye).

The story revolves around the happy couple Mehreen (Saba Qamar) and Meerab’s (Ahsan Khan) lives. Meerab earns a humble living and Mehreen tries her best to make do with his meager salary to maintain a happy home.

Then enters Meerab and Mehreen’s college friend, Maya, who is married to a dual-national multimillionaire. During their college days, Maya was infatuated by Meerab, but Meerab ended up proposing to Mehreen.

Maya’s husband, Arsalan Shah, whose gori wife left him for someone else, thinks only Pakistani women are sincere and worthy of getting married to.

However, Maya proves his hypothesis wrong by divorcing him and usurping a great share of his property.

(Maya, the third wheel in Meerab and Mehreen’s life)

Maya persuades Mehreen to start working so she can earn a living and stop complaining about not living a luxurious life. Maya’s persuasion has an underlying intention – distancing Mehreen and Meerab.

Thus, the plot thickens and the typical innocent and unassuming heroine and the vicious villain emerge!

Apart from being clichéd, the storyline was extremely misogynistic.

Meerab blamed Mehreen, and construed that their marriage fell apart because of Mehreen’s work schedule that made her neglect her home!

Finally, when Meerab finds out that Maya had planned to estrange him from his wife, he refuses to marry her and goes back to Mehreen, who has to forgive him for his infidelity in order to save her distressed family.

Typical. The woman must always sacrifice.

(Meerab and his children.)

While it is understood that the target audience of such dramas are housewives, this alone doesn’t justify the stereotypical script.

And it’s not just NKTMN; every other drama has the same storyline – the wife destroys a happy family setup, as she chases her dreams.

I hate the fact that drama serials just capitalise on women’s emotions and their tendency to watch serials that they can relate to. This catharsis leads them to think all the more negatively about their lives.

Producers should realise that they’re fueling pessimism to women and slashing their confidence with the serials they produce.

I know so many women who cite examples from dramas, presuming the same would happen to them as well. My distant cousin’s wife, who came to stay at our house recently, cited NKTMN and said,

(This is what happens when you ignore your husband. Meerab left Mehreen, see?

This highlights the affects of such dramas on the psyche of women. Women are becoming more frightened, timid and easier to blame.

Very few dramas carry a positive message; one being Geo TV’s Mirat-ul-Uroos based on famed novelist  Nazir Ahmad Dehlvi‘s novel. It shows the resilience of a girl against dowry and depicts how destructive this practice can be for a marriage.

The Pakistani TV industry has grown substantially and such sub-standard dramas are no longer an expectation.

It’s time they improved their quality of dramas; we need creative scripts that carry a positive messages to uplift society and bring forth some sort of betterment and maturity in thinking.

Else, we are doomed to a future of the never-ending trend of unhappy wives.

The author is a sub-editor at The Express Tribune.

CNG woes: Can't you see how miserable you are making us?

Cry over a charred cinema but not a dead human being?

Ramazan with Veena Malik: Lord forgive us all

Why one should love arranged marriages