With elections looming, suddenly education is a priority! 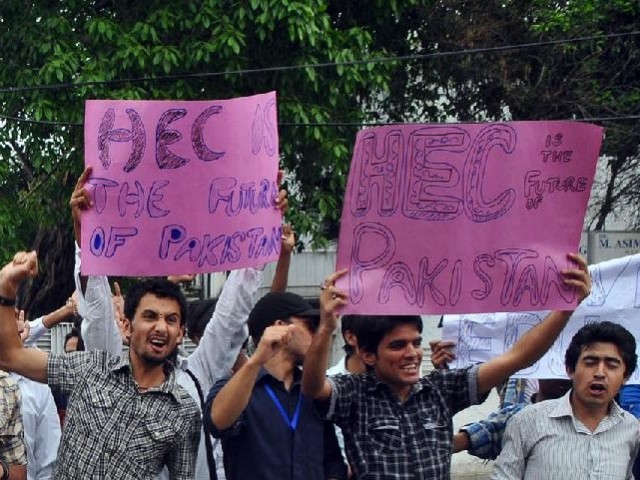 The fake degree holders’ party-brethren in parliament blamed the HEC — instead of their own fraud committing colleagues — for the embarrassment the situation caused them. PHOTO: WASEEM NAWAZ

“Democracy is when the indigent, and not the men of property, are the rulers.” – Aristotle

Elections are around the corner, and the national assembly seems to have taken it upon itself to save the worst for last. The past month has seen a number of odd bills rushed through without following proper procedure. Among the examples are the eight universities — mostly in Islamabad — that have been approved during the last month.

While adding to the number of education institutions available would normally be seen as a good sign, the fact that the bills were rushed through without input from the Higher Education Commission (HEC) leaves one wondering, why now?

Why is the government so interested in adding a plethora of universities when its first four years were marked by attempts to essentially dismantle the HEC for its grave crime of proving many esteemed politicians to be liars?

The fake degree holders’ party-brethren in parliament blamed the HEC — instead of their own fraud committing colleagues — for the embarrassment the situation caused them.

Yet now, with elections around the corner, all parties seem to want to be able to sell themselves as friends of higher education. Or maybe it’s just a matter of making a quick buck for some politicos who wanted to open universities but didn’t want to get entangled in such boring things as formalities and HEC regulations.

But the bigger issue in the past week was the parliament openly mocking the law — specifically Capital Development Authority (CDA) bylaws.

First there was the case of the Jammu and Kashmir Cooperative Housing Society in Sector G-15, which despite not fulfilling the requirements for approval from the CDA, was pushed through by the Senate Standing Committee on Cabinet Secretariat after some serious arm-twisting by the committee chair, Senator Kalsoom Perveen.

When the debate on the session was held on Monday, the subject — which should have been open and shut considering the extent of the violations — ended up becoming the day’s focal point.

Maybe because the owner of the housing colony is a gentleman named Chaudhry Muhammad Yasin, a minister in the Azad Jammu and Kashmir (AJK) government and a senior figure in the PPP’s regional chapter.

How dare something as trivial as laws and regulations be used to hold back a huge moneymaking opportunity!

The senator went as far as chiding the CDA official who was explaining why the approval for the housing colony would be a violation of CDA bylaws. She then named another CDA officer as a person who would have pushed the deal through without any fuss.

Just last year, that ‘cooperative officer’ was pulled up by the Islamabad High Court for questionable conduct at the behest of political figures, with his conduct in court earning him a stay at the wonderful lodgings in Adiala Jail.

What a good role model for the new guy!

Without going into the nitty-gritty details of the housing colony, the project failed to meet CDA requirements on almost every measure. Yet, despite the objections of every CDA official who spoke during the session, and even the Cabinet Division special secretary, the project was approved after a not-so-veiled threat from the senator, who said,

“There are several issues related to CDA officers pending with this committee. I will see how you do not issue the No Objection Certificate (NOC).”

While I would like to explain further, the lower house won’t let me.

That’s because a day later, the National Assembly Standing Committee on Cabinet Secretariat came up with an almost equally ludicrous proposal, as lawmakers took up the oh-so-critical issue of a plot allotment which was not even high on the day’s official agenda, yet ended up becoming the only subject meriting discussion.

In the process, they neglected three agenda items of public interest to pressurise city managers to give a timeframe for the allotment of the commercial plot in Sector I-11 to another well-connected businessman.

This came despite the fact that the businessman’s efforts had been scuttled multiple times by the CDA, the Islamabad High Court and even the Federal Ombudsman. No surprise, since he was essentially demanding that the valuable plot be given to him in a no-tender deal at a throwaway price.

How dare they indeed.

Not only did the MNAs’ on the committee insist that the deal be pushed through, but they wanted it done within the current government’s tenure.

Well, elections cost money, and someone has to pay. It might as well be grateful businesspersons.

Machiavelli wrote “politics has no relation to morals”. After all, money and power, rather than any sense of social responsibility or nationalism, is what drives politics.