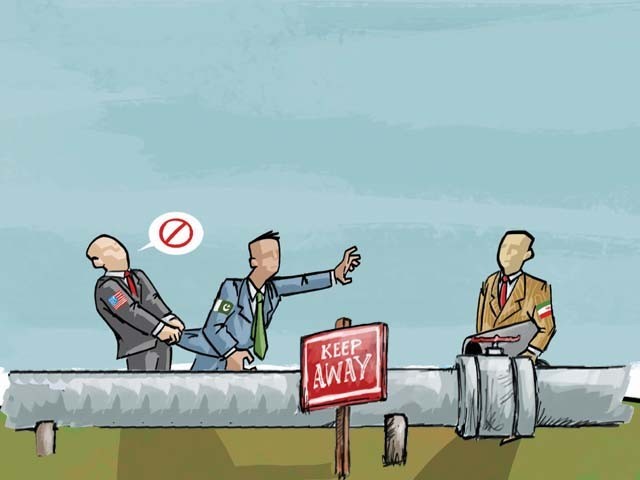 So the pipeline is certainly a good idea. But is it a feasible idea? I fear not—and for reasons having little to do with US sanctions on Iran. DESIGN: JAMAL KHURSHID

It’s official; the Pakistan-Iran pipeline project will soon be underway.

Work is scheduled to begin on the Pakistan side today (Iran’s portion is nearly done), and is expected to be completed in less than two years.

Predictably, Washington is not pleased.

“We think that we provide and are providing the Pakistani government and people a better way to meet their energy needs,” a State Department spokesman recently declared.

That’s a questionable claim. US officials have been trumpeting their investments in hydropower projects, which are intended to generate more than 1,000 megawatts of power. Yet the pipeline is expected to provide more than 4,000 MW.

Indeed, from a pure supply/demand argument, the pipeline is a no-brainer. Pakistan is suffering through its worst gas shortage on record, and the nearly 22 million cubic meters of gas it promises to deliver to Pakistan daily could go a long way toward alleviating the country’s acute energy crisis.

So the pipeline is certainly a good idea. But is it a feasible idea? I fear not—and for reasons having little to do with US sanctions on Iran.

Many scoff at the idea of constructing the Turkmenistan-Afghanistan-Pakistan-Iran pipeline because of Afghanistan’s lack of security. Yet the same argument applies with its Pakistan-Iran counterpart. The Pakistan portion is expected to extend across nearly 800 kilometers, and will traverse Balochistan.

Is it realistic to expect that Balochistan-based Sunni sectarian extremist groups such as Lashkar-e-Jhangvi will look on calmly as the Pakistani state constructs a massive link to the world’s preeminent Shia state? Given what we know about the Pakistani security establishment’s inability (or unwillingness) to respond to the LeJ attacks in Balochistan, it’s unlikely the LeJ would restrain itself from attacking pipeline workers and structures.

Then there’s Balochistan’s separatist insurgency. One of the grievances that fuels it is Islamabad’s mis-governance of the province’s natural resources. The circumstances are somewhat different with the pipeline (energy is to flow through Balochistan instead of being extracted directly from it). Yet the general context is the same; Balochistan will once again be a geographic linchpin of Pakistan’s energy security strategy. When Pakistan has executed this strategy in the past, bad things have happened in Balochistan—including attacks on energy facilities.

Still, let’s suspend our disbelief for a moment, and imagine that security isn’t an issue. A critical obstacle would still remain: Riyadh, arguably Islamabad’s most important ally, and Tehran’s chief regional rival.

We all know the story of Pakistan-Saudi ties. It features decades of military cooperation, ample largesse (between 2004 and 2009, only Washington provided more grant assistance), and a long geopolitical partnership (recall how during the height of the Arab Spring, several thousand former Pakistani servicemen deployed to Bahrain to help the Saudi-allied regime in Manama put down protests dominated by Bahrain’s Shia majority).

In the summer of 2011, Islamabad and Tehran engaged in a flurry of diplomatic activity—culminating in a pledge to dramatically increase bilateral trade. Yet even as this was happening, Pakistan’s president and prime minister made separate trips to Riyadh. Ex-PM Yousaf Raza Gilani invoked soaring rhetoric about renewing “the bonds of brotherhood and fraternity” between the two allies. Several weeks later, Pakistan refused to accept Iran’s offer to help build the Pakistan side of the Pakistan-Iran pipeline.

Today, of course, this offer has been accepted—and Saudi Arabia, like America, is likely not pleased.

Why has Islamabad decided to go forward with the pipeline project now?

The optimistic explanation is that Pakistan’s leadership has decided to act boldly to safeguard the national interest—in effect seizing an opportunity to ease what has become one of the country’s most acute crises, regardless of any opposition from the Saudis or Americans.

I fear, however, that the proper explanation is purely political. With elections presumably just weeks away, the unpopular Pakistan People’s Party decided to finalise the pipeline agreement, knowing full well that the move would resonate with the energy-starved masses—and, as an added bonus, allow the PPP (a relatively pro-American party in an anti-American nation) to thumb its nose at Washington.

If such short-term political calculations are indeed what compelled the government to complete the deal, then more long-term—and politically unpalatable—concerns, such as the actual feasibility of the project, can simply be set aside.

Pakistan should be applauded for pursuing the pipeline project.

However, given the immense challenges of consummating it, Islamabad should simultaneously be pursuing other strategies—from energy trade with India to greater demand-side efficiency, and above all the consolidation of Pakistan’s chaotic array of energy-related institutions into a single ministry—with equal vigour.

Read more by Michael here or follow him on Twitter@MichaelKugelman