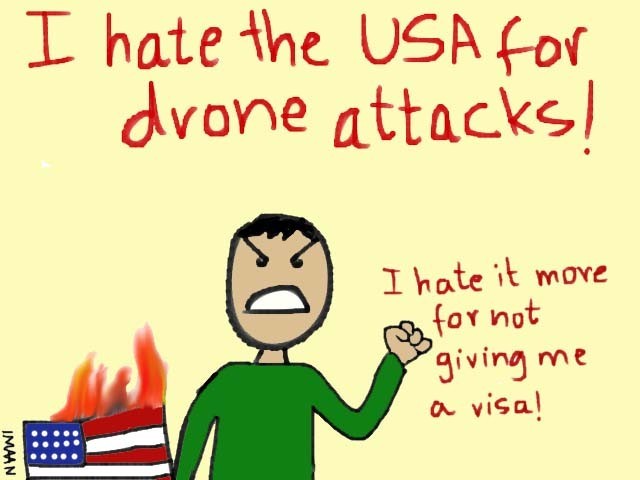 As a comedian, especially if your style is based on observational humour, it’s important to have an eye for detail, as it meanders around the most trivial and insignificant aspects of everyday life.

After spending almost three decades of my life in Pakistan, and seeing the society very up-close, I have come to the conclusion that amidst the swelling cacophony of the rising disorder that has befallen upon us, there still is a lot of humour embedded in many things that we may tend to ignore.

So here’s a list of things we say/do that defines our behaviour individually or at a national level that defies logic in so many ways. I’m not even remotely trying to be funny here.

1. Every household has male dominant dictatorship, yet we want democracy in our country.

2. Find someone and get married. You’re not allowed to date!

(What does the boy do for a living? Nothing? Let’s get him married then)

(Curses on the practice of dowry… if it is insufficient)

5. Garbage trucks collecting garbage from one place and spreading it all over the city.

6. You can’t double park on the narrow Zaibunissa Street or Tariq Road in the middle blocking the ongoing traffic. The vehicle will be towed away, unless there is someone in the driver’s seat, in which case it’s perfectly okay.

8. Want to protest against loadshedding? Let’s burn all those vehicles and offices that could only help with fixing the problem.

9. Want to protest against America and Israel? How about we buy their flags and then burn them?

10. Facebook and Twitter Jihadis changing the country by liking/sharing patriotic posts on social media. They also sleep through the Election Day.

11. We have a Kashmir Day holiday, you said? It’s going to be so tough picking between Dabangg 2 and Race 2 at Atrium Cinema.

12. Kashmir banega Pakistan. (Kashmir will become part of Pakistan). But oh, I haven’t heard of any city other than Srinagar, let alone what the issue is.

13. I hate America! I hate it even more for cancelling the visa lottery scheme in Pakistan.

15. You have a political/religious procession and the threats of an attack are very high requiring you to seal the route? Let’s choose the only road for the occasion that leads to all the major hospitals in Karachi.

16. So there’s a shortfall in the electricity production? How about we call Saturdays off in the government sector instead of working extra hours and helping building the economy so maybe, just one day we could be able to streamline the economy, pay our debts and be self-sufficient in the electricity production? Nah, calling off Saturdays sounds much, much more effective.

18. So somebody broke into your house while you were out of town? Kindly give us the description of the thief. (Happened to someone I know.)

19. You are guilty unless proven innocent.

The Police (every bribe you take)

20. One of the biggest air force bases in the country is also available for weddings and corporate events.

21. Where people think that Israel is their biggest enemy, they can’t name any three Israeli cities without Googling. Know thy enemy!

22. “We will be conducting a secret mass targeted operation against gangs in Lyari as of midnight. Beware!” says the interior minister live on TV.

23. Intelligence agencies warned about a truck loaded with explosives entering Karachi. Well, thanks for the heads up, I guess.

24. Terrorists are highly trained and are funded in billions by enemy states. Hey! Why don’t we block mobile services because they’d still be relying on ghanta offers and SMS packages and have probably never heard of satellite phones or simply a walkie-talkie? Brilliant idea!

25. Suspending mobile services and taking extra precautionary measures on highly volatile days only means that the government is not okay with people dying on that particular day.

26. So you’ve just been promoted as a general in the army? How about you go to the US and take war courses in the Midwest so they can teach you strategies and know your moves beforehand?

27. So you two countries don’t get along and have sectarian differences? How about we fight your war in our homeland?

28. The finance minister said exports fell in the previous fiscal year. Well, that was bound to happen when all the containers that were supposed to be on a ship were lying on our streets to protect the VIPs.

29. It is here where the news headlines in the same news bulletin go like this: Bomb claims 80 lives in Quetta; Karachi faces another episode of violence as target killing continues; drone kills 18 in South Waziristan including women and children; a panda gave birth to twins in Shanghai Zoo, Salman Khan hopeful for the success of Dabangg 2 (Fevicol song plays in the background).

30. So it’s your leader’s birthday/death anniversary tomorrow? How about we shut down all the schools in the country just so this nation could be put a day behind from being educated so that maybe one day they don’t end up becoming what your “visionary” leader had envisaged.

Meera versus Imran Khan? Of course, I'll vote for Meera!