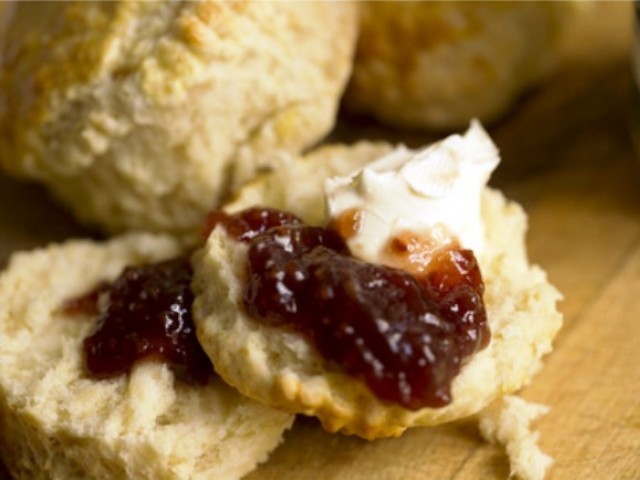 Instantly my thoughts wandered from the Crawleys to the curd sandwiched between these oven-baked small mounds of bread called scones. PHOTO: SAADIA TARIQ

One of the most widely watched British period series Downton Abbey has gripped me as much as it has the rest of the world. This fiction drama – based in Yorkshire starting from the drowning of the Titanic in 1912 – uses the Highclere Castle in Hampshire, UK for its interior and exterior filming.

The Earl of Grantham, his American wife and three beautiful daughters, their suitors and an entire team of domestic staff make up most of this fast paced historical performance. Although all actors have done more than justice to their characters, the role of the Lady Grantham, Dowager Countess played by Maggie Smith is a true reflection of the rich bigotry before World War I; the dogmatic attitude, the suave manoeuvres and the absolutely entertaining one-liners.

“What is a weekend?”  She innocently asks the gentry coming from a working town.

“Of course it would happen to a foreigner. No Englishman would dream of dying in someone else’s house” She beams proudly.

During one of the episodes, showing a typical 4:00pm tea time at the estate, where the ladies of the house are collected for a chit chat, the corsets, the bouffant hair do, the butler roaming in a tuxedo, one of the daughters’ of the Earl, Lady Edith Crawley is nibbling on a scone with lemon curd.

My eyes were glued on that one little flaky nibble.

Instantly my thoughts wandered from the Crawleys to the curd sandwiched between these oven-baked small mounds of bread called scones.

Unevenly raised, golden brown from the top, crumbly and soft, scones come in various flavours and sizes. Some are enhanced with fruit, whilst some come sharp with the addition of salty cheddar. They are soft to the touch and easily broken into half.

A generous slather of butter, Devonshire clotted cream, honey or lemon curd are some of the ways to dress and devour it. Some use a combination of clotted cream and strawberry preserve and instantly bite into an explosion of texture and taste. Sweet, creamy, flaky and buttery, it is one of the best accompaniments to a steaming cup of breakfast tea or an afternoon perk-up. This simple and easy-to-make recipe has been tweaked from a scone recipe by Nigella Lawson from her book called “Domestic Goddess”. I thought the combination was perfect; Downton Abbey – Domestic Goddess and buttermilk scones!

Here is how to go about it;

·      Preheat oven to 220°C and line a large baking sheet with parchment paper.

·      Put the flour into a bowl with sugar, cream of tartar and baking soda.

·      Rub the fats in the flour until the mixture resembles coarse breadcrumbs and at this stage you can add the cranberries. You can do this step in a food processor also; personally I like to use my hands – it’s very therapeutic- give it a try.

·      Make a well in the centre of the flour mixture and pour in the buttermilk all at once. Gently work the mixture together to form dough.

·      Lightly flour your work surface, pat the dough down and roll it out to a thickness of approximately 1¾ inches.

·      Cut the dough with the biscuit cutter and arrange the scones on the baking sheet fairly close to each other. Brush the scones with the beaten egg to get the soft warm golden tops after baking.

·      Bake for 12 minutes, by which time the scones would have risen considerably (as if suffering from cellulite) and browned from the top and bottom “I couldn’t have electricity in the house, I wouldn’t sleep a wink. All those vapours floating about.”