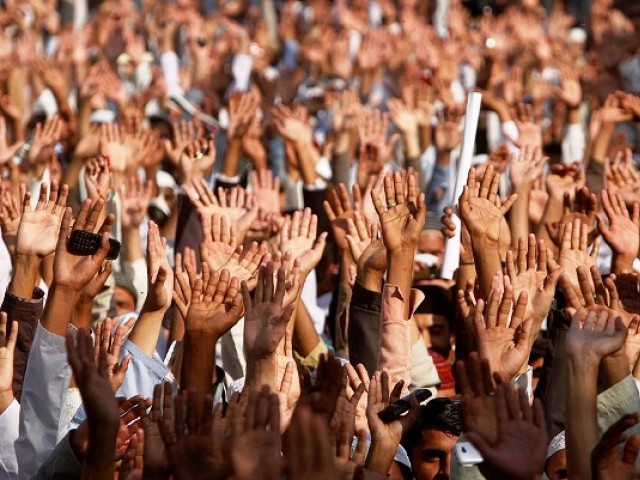 When sit-ins cause trouble to the ordinary citizen, they lose their value. PHOTO REUTERS

All these people stage sit-ins to pressure the government into accepting their demands.

Here, I would like to refer to two of the biggest sit-ins in the country, which paralysed road and rail traffic throughout Pakistan. These sit-ins were staged by the Wahdatul Muslimeen in January and February against the mass killing of Hazaras in Quetta.

There is no doubt that the anger and demands of the protesters were genuine because the Hazaras lost scoress of their loved ones in bomb blasts that were seen as the failure of the government and its spy agencies to control the situation.

As a citizen of Pakistan and a journalist, I respect the sentiments of the protesters and even feel their pain, but the situation took an ugly turn with the blockade of national highways and all the main roads in the big cities, due to which hundreds of thousands people were affected.

In Karachi, for example, many main roads were blocked. People couldn’t leave their homes to go to work. Moreover, ambulances did not have space to pass. This created a lot of trouble for the ordinary citizen.

Recently, many ugly scenes unfolded when the national highways and other main roads were blocked after the attacks on Saen Hussain Shah of Qamber and Saen Hajan Shah of Shikarpur. Both men are apolitical and believe in spreading love, peace and brotherhood.

Would it not be safer for both, the protestors and the by-passers, that the protest takes place in a locality where their voice can be heard, their discipline commended and their cause highlighted even more? Wouldn’t Bagh Ibne Qasim have been a more suitable place for a sit-in, with ample amount of space, security and coverage?

Causing trouble to the common man only sparks feelings of detestation and frustration in the public, whereas, this same ordinary citizen would, on a more peaceful occasion, have taken part in the sit-ins. The inconvenience caused by the protest does in fact overshadow the cause being fought for.

Why lose the public’s support when the cause is great enough but only the approach is flawed.

In a democracy, every citizen has the right to protest, but any protest or sit-in should not deprive others of their rights.