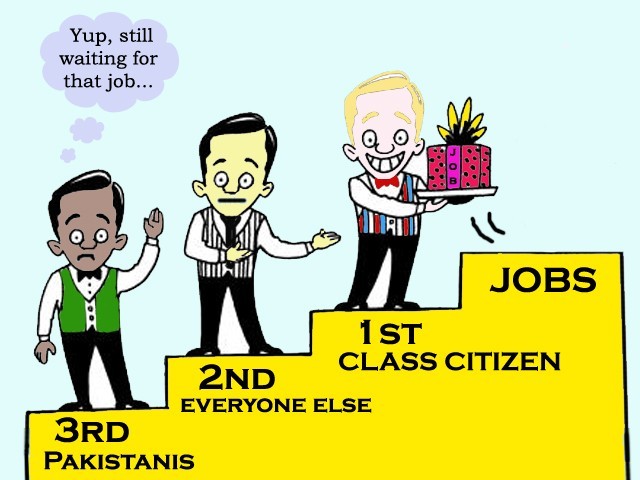 People of other nationalities may be treated better than Pakistanis even at a local general store! DESIGN: ERUM SHAIKH

There are a couple of (read: many) things that are immediately dismissed once it is mentioned that a person is a Pakistani living abroad.

For one, it is often forgotten that moving abroad means starting over– from scratch.

From waiting at the airport for eight hours because of a miscalculation in hotel costs, to renting a basement for immediate accommodation, to living in the basement for approximately six years until you can afford an apartment, to finally being able to buy a small to medium sized house in a semi-safe suburb (because the public schooling and medical facilities are better in a suburb than in the city or countryside) at a ridiculously high mortgage rate, which will take approximately 25 years to pay off.

Starting over from scratch may also apply to one’s academic and professional career, as education equivalency is usually unfair.

It takes years for a Pakistani professional to get a job and attain a salary that his/her profession deserves, in a foreign country.

For instance, a civil engineer may end up driving a taxi for seven years in order to accumulate enough money to pay for his equivalency exams, while feeding his children.

Furthermore, moving abroad does not mean getting rid of politics.

Political grievances of one kind or another exist for anybody, anywhere; regardless of whether they live in Pakistan or abroad.

This means that people of other nationalities may be treated better than the Pakistani and this can be seen anywhere- even at a local general store, only because it is a universally acknowledged fact that everybody deserves preferential treatment over Pakistanis.

This may also mean that a Spanish girl at your child’s school may be celebrated for being “ethnic, exotic and cultured” while your Pakistani child will be called a FOB (fresh off the boat) for wanting to listen to Abrarul Haq at lunch.

Oh, and let’s not forget that other countries have economies too. Food is not free in these countries, and jobs are not handed out like wedding invites. Money does not grow on trees- heard that one from my nani as she might have heard from her nani, and it is true.

While these overseas Pakistanis may tell stories of owning acres of land (which at one point or another was probably sold to fund a family member’s education), and may claim to have found that they trace back to the Mughal dynasty (or the equivalent), they still lead lives in which they have to struggle to make ends meet, and are merely trying to save face in a society that is obsessed with material wealth.

I wish people would stop assuming that life for a Pakistani must be easy if he/she is living abroad, because something about being told that my family and I did not have to work for what we have, as though everything was handed to us on a silver platter, does not sit well with me.