Pakistan could be a tourist’s delight 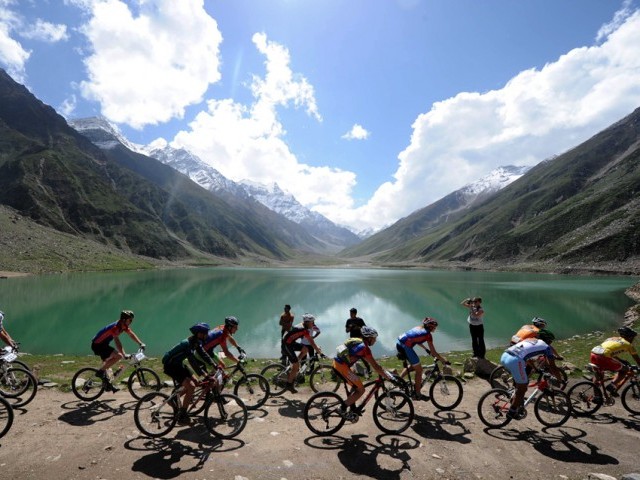 You may have heard some remarkable stories about Pakistan as a tourism hub from your parents and grandparents. The 60s and 70s, in particular, were the decades when tourism in Pakistan saw its prime.

The pictures of those days can still be found doing rounds on the internet, boasting a plethora of visitors from all around.

Those were the days when Pakistan would invariably feature in the lists of international tourist destinations. I haven’t seen that Pakistan, but I can well imagine it, owing to the accounts I’ve had from many people around. Therefore, when I came across this article titled, ‘Pakistan tourism: a sleeping giant?’ in an Australian magazine, shedding light on the aspects of Pakistan as a treat for tourists, I couldn’t help add my own two cents to the topic.

The article starts off with an oft-repeated, almost clichéd line:

Then the article goes on to indulge in the possibilities that can be drawn from Pakistan’s tourism, narrating its beauty and destinations, and no one can disagree.

In 2009, the World Economic Forum’s travel and tourism competitiveness report ranked Pakistan as one of the top 25 per cent tourist destinations for its world heritage sites. Pakistan’s rich heritage is one that outdoes many countries of the world.

The United Nations Educational, Scientific and Cultural Organization (UNESCO) has enlisted six Pakistani sites as ‘world heritage sites’. These include the magnificent Shalimar Gardens. the fort in Lahore, the Makli monuments in Sindh, the ruins of Moenjodaro also in Sindh, Rohtas Fort near Jhelum, Buddhist ruins in Takht-i-Bahi and the ancient city of Taxila. 18 other sites, including the Baltit fort in Hunza and the tomb of Shah Rukne Alam in Multan, have been classified as ‘tentative sites’ by the same.

(The Makli graveyard in Thatta famous for its architecture. PHOTO: FILE)

Monuments and structures, dating back to 3300 BC can be found, and impressions from varied dynasties and time periods hold testimony to the rich historical back-drop of Pakistan.

Geographically, the country is as rich as it gets. From the snow-capped mountains of the north to the deserts of Thar; from the plains of Punjab to the plateau of Potohar; from the Salt range to the coast of Makran; the country comes solid on the scale of geographical diversity. Lush green fields, healthy hill stations, azure skies and clear rivers – you get all here.

Then there’s the culture – the sumptuous cuisines, the multitude of languages, the flamboyant attire, the soulful music, and the genial demeanour.

(Intricate art on public buses and trucks is now a part of Pakistani culture. PHOTO: AFP)

We have cities brimming with all the progression of modern life, and villages where ‘saag’ and ‘makai ki roti’ are still devoured beneath peepal trees with stocky glasses of lassi! All this ascertains the great potential that Pakistan has as a grand tourist destination.

(Peanuts roasted in sand are a specialty in Pakistan and are sold on the street. PHOTO: ONLINE)

(Devotees performing ‘dhamaal’ to the sounds of dhol is a special sight for tourists. PHOTO: REUTERS)

But then, as this article points out, the problem here lies in the world ‘potential’.

Despite the excess of offerings that Pakistan can make to its tourists, ‘Pakistan has fallen behind neighbouring India, Nepal, Sri Lanka, Maldives and Bhutan’ when it comes to tourism, and that’s where the bad news begins.

Given the political instability of the country, which can be dated back to about forever, it comes off as no surprise that many international travel agencies warn their clients not to visit Pakistan. Let international tourism be; even domestic tourism has been affected unfavourably by the waves of terrorism and lack of law and order in the country.

Moreover, natural calamities such as the 2005 earthquake and 2009 floods have also added to the chagrin. Despite this, the Discovery Channel’s Insight Guides series on Pakistan begs to differ, and rather states that in spite of its dubious disposition, statistics shows that Pakistan remains an excessively safe country for tourism!

Accordingly, tourists will tour. It may be argued that it’s actually the tourism industry of Pakistan that’s keeping the tourists at bay. True, there are some places in the country that must not be recommended to travel to, but it’s due to a lack of will on part of the government that the tourism industry is on life-support even in the safer places.

Here’s a quote from the same article,

“According to an analyst at the Sustainable Development Policy Institute in Islamabad, Pakistan’s tourism sector has failed to grow due to continued mismanagement of the industry. There’s nothing new there.”

No surprises there. Accordingly, the same World Economic Forum that was all praise for our heritage in 2009, has ranked Pakistan at 122 out of 140 countries in its latest travel and tourism competitiveness report. A sorry state of policy rules and regulations has been cited by the report as the most probable hindrances to a blooming tourism industry in the country, followed by poor prioritising of travel and tourism. Ethiopia, Uganda, Ghana, and Zimbabwe, all have fared better than Pakistan. (Just as a consolation though, that’s three places better than where we were last year!)

It is not far from the truth though. The poor state of leisure tourism in Pakistan emanates basically from the sheer absence of any tourism facilities. A single look on the Pakistan government’s tourism website can give you a pretty clear idea of that.

Advertisements and propagation of Pakistan as a tourist destination in international media is another sorry tale. The basic services to those who visit the country are at a bare minimum. Moreover, many of the tourist spots are consistently facing gross negligence and nobody seems to be bothered.

Tourism, like every industry, needs its due investment before it’s profitable. While there’s no input, sadly, it’s only just that tourism is neither alive nor kicking in the country.

But then, on a positive and honest note, there’s one entity in Pakistan that pretty much makes up (or at least tries to) for all these fallacies, and it’s the people of the country! Nothing, perhaps, sums it up more comprehensively than what Lonely Planet has to say about Pakistan:

“Although conservative, Pakistanis are by nature a welcoming and hospitable people to foreigners, trying to get by in the face of indifference from their government and occasional hostility from the outside world… The scams and hustle you might experience in heavily travelled India are nowhere to be seen here. Instead, look forward to spontaneously offered cups of tea and conversations about cricket. You will feel like you have the country to yourself. Attractions that would have been splashed over the glossy pages of newspaper travel supplements are almost empty. While enthusiastic travel advice comes tinged with official government travel advisories, you’ll need to keep one eye on the news before booking your ticket – but once here, you’ll realise that Pakistan really is one of the world’s best-kept travel secrets.”

Therefore, the next time you’re on a break from work and wish to see all things beautiful and exciting, pack your bags and come to Pakistan. It might not be a bed of roses, but you won’t be disappointed.

And that’s the promise of Pakistan!