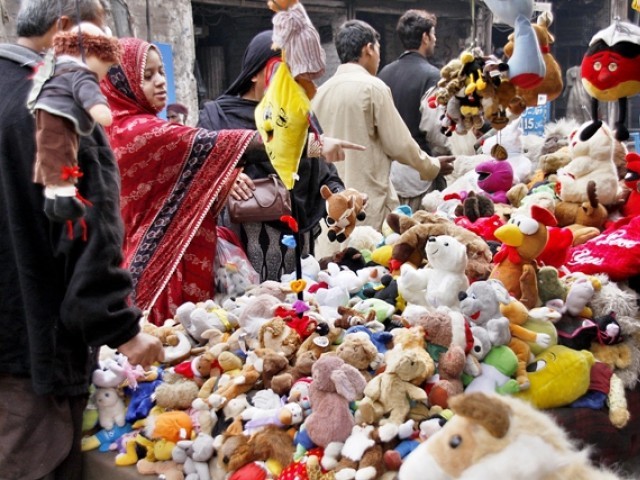 Anarkali is a fascinating place that stands out as the character of Lahore. PHOTO: ABID NAWAZ

I remember the first time went to a mall; it was way back in 1977. The place was called Brent Mall. Hindsight tells me it was not too big and probably inconsequential, but it looked huge and I hated it.

It was a sanitised place of shopping, crowd dressed every which way to impress, straight lines, homogeneous construction, and uniformity of thought. No culture or creativity.

Today, commencing from USA, expanding to Europe, Middle East and now Asia, the mall is the ‘in’ place. It’s a destination, where you can spend the day. shop, eat, snack, have coffee, watch a movie and even go skiing in one instance! The functionality appeals, but its bourgeois lack of character, well in line with modern day living, really palls and one wishes for the old markets.

I was brought up on such fare and it is in the character created by these old markets that we thrived on. Even on my travels around the world, I’ve seen that some of the most striking places in modern cities are these ethnic markets which bring out the character and culture of the people and shed light on their values. So, I have tried to recall some of these experiences over the years.

It was the queen of traditional markets – my childhood was spent shopping here. The smelly meat market, great kiryana stores, the pet market, fruit places and more than that, the feel of the place was just surreal. The Gothic-looking architecture is fabulous! I even remember various English memsahibs (ladies) who used to shop here early in the morning.

Bohri Bazaar is a place that answers all the needs of Karachiites. I believe the market caught fire in the 50s and had to be rebuilt. They had clothes, toys, books and specifically delicious nimco! It is God’s gift to Karachi, to be visited once a month. Alas, Tariq Road and Hyderi took customers and this market lost its importance.

Sadly, I haven’t been there in years!

This is a place where you to find that elusive Noritake which you pick in bits and make a collection. You get great bargaining. Fruit and vegetables are all available below the retail market. It’s given its character by the endless workers who tag along carrying your goods for a minuscule price and guide you to all the secret goodies.

Now I am not an expert, but Anarkali has that smell and traditional feel – like a wrapped piece of velvet, taken out after decades. It is archaic and redundant now, but grand nevertheless! For some reason, I associate glass bangles and food with Anarkali, though it houses many items. This fascinating place stands out as the character of Lahore.

Here, you can find food of all sorts and people of all sorts too. You are better off roaming in the market on foot as you get a bigger choice. There is music too here too which makes the experience even more enjoyable.

I have a lovely memory of a beautiful afternoon, a quarter of a century ago. I think it was summer. A juggler was performing, and I stood watching, biting into an extremely chunky sub, loaded with beef.

I salivate at the memory.

No sanitised mall can provide the sort of experience I witness at this market.

At the Grand Bazaar you can buy almost everything, barring a car. This must be the grandest bazaar around. 3,000 shops of all kinds, haggling, and lots of people buying carpets, ceramics, gifts, ornaments, clothes, spices, dates – you name it. It’s a once in a lifetime experience to visit the place and the women go absolutely gaga when they go to this bazaar to shop. A few hours of roaming and watching all the haggling and people is an experience in itself.

My first experience at Petticoat Lane goes back to 1978. I had these delicious, freshly fried sugar-coated doughnuts – piping hot! At the time, I was a student and had very little money to indulge in the trendy clothing, but there were second hand book stalls.

Sundays used to be crowded and you had to push along watching for pickpockets. I’m not sure if it’s still the same, but it was bordering some seedier parts of London, so I expect that not much has changed.

The real tragedy is that hyperstores demolished the high street market – the small corner shop, newsagent, barber, butcher, veggie man, the pharmacy and such. All the years of familiarity and personal touch were gone at the altar of commercialism. Man has lost depth in life to a corporate existence, flushing with glitz and so called glamour.

There are other markets which I have visited and, of course, many more places which others would know. In Singapore I remember buying a quaint Sukarno cap, from an Indonesian market. Lagos is a memory of a shoe purchase from a set of shacks which qualified for a local market. In the Middle East, the old wholesale markets sell below large stores prices and also give you Turkish coffee.

The universal language of hospitality prevails.

The traditional markets are a memory and identity of a world where humans interacted on a personal level and warmth existed amongst strangers – whatever caste or creed.

Alas, it is a world lost!