Killed and forgotten: Another ‘police encounter’ 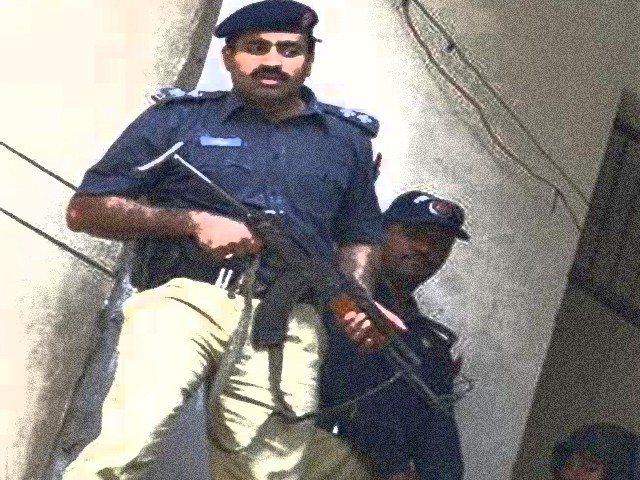 many among the police personnel see nothing wrong with suspected criminals being ‘encountered’. PHOTO: REUTERS

“The criminal was killed in a police encounter”

This, unfortunately, is becoming an all-too common phrase among the law enforcers, especially the Punjab Police, which have become notorious for extrajudicial killings in recent years. Over 300 suspects were killed in police encounters in Punjab last year, and this month alone there have been five in Rawalpindi, including two brothers.

Ghulam Sajjad and Malik Jamshaid were shot dead during a raid by a team of elite force led by two security officers at the Katarian locality, to arrest ‘some terrorists’. An elite force commando was also killed in the shoot-out.

The way the raid was conducted, and the attitude of city police high-ups makes the operation controversial and raises many questions about the ‘encounter’. No evidence of any link of the two men with any terrorist group has been established so far by the police.

With this scale of corruption in and misuse of power by the police officers, one can easily understand why the killing of two brothers has been investigated with such laxity. No FIR has been registered so far. For the family no explanation is given beyond,

“We thought they were terrorists.”

And for the little child who watched her father die?

The stigma of being a terrorist’s daughter, because there is no way the police will even investigate one of their ‘paity bhais’(brothers-in-arms), let alone convict him in such a case without a kick from someone upstairs. It’s called brotherhood, or at least some perverted version of the concept.

Earlier on February 6, a rickshaw driver was killed in an ‘encounter’ on Tipu Road. According to the police, the deceased and his friend were fleeing after snatching a motorbike.

On January 23, Waheed Qureshi, wanted by the police in connection with the murder of six people in Gulistan Colony, was shot dead in another ‘encounter’ with the police.

While it is not unusual for an armed criminal to be shot at and possibly killed by the police, the level of respect given to the legal maxim “innocent till proven guilty” by members of law enforcers is discouraging.

Many people are killed in unexplained circumstances while in police custody for interrogation, usually while getting the ‘drawing room’ treatment. Torture is routinely employed in police stations, cruel and inhumane treatment is not unusual at all, palm-greasing has become a common practice, and if the right palms were not greased, an extra-judicial death sentence can easily be arranged.

What is more worrying is that many among the police personnel and even the general people see nothing wrong with suspected criminals being ‘encountered’. This is because of the inherent mistrust of the flawed investigation and judicial system.

Corruption is rampant in the police department.

In Islamabad and Rawalpindi, we have senior police officers being investigated for their involvement in drug peddling, carjacking, bootleggers and cops have always been hand-in-glove, and the word on the street is that brothels are functioning under the protection of police officers.

Another reason for such horrible trend is the incitement by the law enforcers and judiciary.  Among the defenders of the death penalty is the belief that violent criminals should be dealt with violently — an eye for an eye.

All well and good, but even a murderer or rapist deserves his day in court. The police are responsible for bringing a suspect in, not to play judge and executioner as well.

As an end thought, if encounters are to be considered acceptable if the person killed is a ‘bad person’, why is it that nothing ever happens to the people who could ‘justifiably’ meet their maker as a result of an encounter, such as self-proclaimed killers and terrorists.

They are the ones who murder governors while standing in front of a group of armed police officials and still make it out alive. The ones who attack the police and government officials, but remain safe because of their politician links. The ones government officials go to on their knees, begging for them to turn themselves in. They, it would seem, are the only ones beyond ‘encountering’.