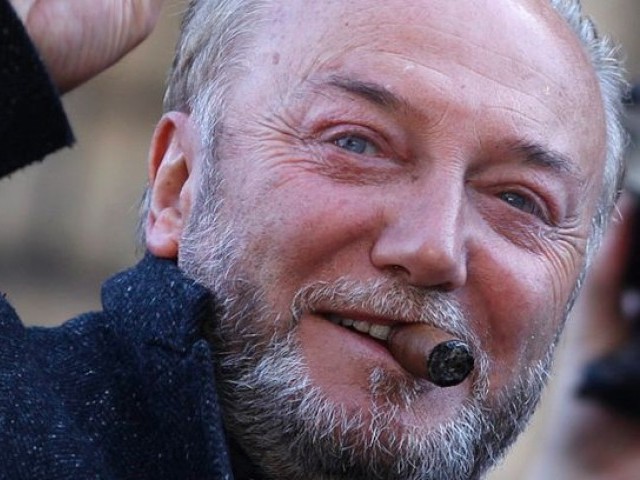 Mr Galloway went on to announce that he had “hundreds of thousands of followers” on Facebook and Twitter and asked the audience to immediately follow him. PHOTO: REUTERS

George Galloway came, he saw, he conquered. Conquered who, one may well may ask?  Karachi’s literati and liberal elite who intermingle, for one, who fawned over the UK Member of Parliament (MP) at the recently held Karachi Literature Festival (KLF).

With high expectations, one went to hear him speak at his first session with Irfan Hussain as moderator. After all, Mr Galloway had no less than three outings at KLF, the last being as being the keynote speaker at the closing of the festival, so evidently even the Oxford University Press was not immune to his galloping charm.

Mr Galloway arrived, cocooned by a phalanx of fans, and carrying a cigar which he then lit on stage to merrily puff away on. The unfazed moderator proceeded to ask him rather obsequious questions which made it all too obvious that he was a great admirer of the MP. Questions ranged from the amazing style with which Mr Galloway took apart US Congressmen over the Iraq War (the grinning MP informed us that the YouTube video had had millions of views, hence we should all immediately check it out) to his reputation as “Gorgeous George’’ in the UK press and whether he is still known by that moniker. Mr Galloway’s bald pate and periwinkle blue eyes aside, we were informed that that he is a much married man now, so he is no longer referred to as gorgeous.

Mr Galloway then spilled forth his pearls of wisdom like “Bourgeois Pakistanis hate the Bhuttos because they challenge the power of feudals in Pakistan”, “Bilawal Bhutto is not a feudal”, and “The feudals hated Mr Bhutto because he introduced land reforms which threatened them, hence the feudal lobby got him hanged.” One had barely recovered from this lesson in history when the MP questioned why on earth Pakistan was friends with the US “who don’t give a damn about you.” Far better to be friends with the Chinese, he graciously advised, since they are ‘’true friends’’.

He also knew with certainty that Pakistan was lucky to have Bilawal Bhutto as a leader, because he had learnt ‘’so much’’ from his mother. Mr Galloway regretted that he missed the Bhutto scion’s speech, but rest assured he knew it was great although it did not contain his valuable input.

Mr Galloway went on to announce that he had “hundreds of thousands of followers” on Facebook and Twitter, recited the details of his accounts, and asked the audience to immediately follow him.

With the important stuff out of the way, the floor was thrown open for the question answer session. A senior member of the audience prefaced his objection to Mr Galloway’s cigar by saying,

“I hope you don’t mind my saying this, but you should not be smoking in public places.”

While Mr Galloway’s response was to blow smoke rings, the moderator gallantly intervened,

Needless to say, the chief guest continued smoking on stage, because after all this is Pakistan where the colonial mindset persists despite the departure of the British Raj. And if there is a “gora” who panders to all the right causes by being anti America, pro China, pro Iraq and pro Palestine, then hey, he is going to be feted and adored by one and all. So what if these very positions win him votes in UK from Muslims and unseat well entrenched Labour Party contenders?

An enthusiastic gentleman brought up Arab Spring and it’s relevance to Pakistan and asked imploringly whether such a revolution was possible here. Mr Galloway grandly announced that Pakistan should go ahead and have a revolution, since he was all for it. The grateful audience clapped wholeheartedly while the beaming moderator gazed at the benign MP. Thank God, we have the permission to go ahead with the revolution,  now where do we start? seemed to be the question agitating the minds of Mr Galloway’s admirers who flocked around him like bees to a honey pot, undoubtedly wishing to hear more of his golden words once the session and his cigar drew to a close.

At the session “Pakistan through Foreign Eyes” moderated by the folksy Cyril Almeida, bespectacled Hasnain Kazim of Der Spiegel questioned why Pakistanis are so obsessed about what image foreigners have of Pakistan.

“Why do you care what we think?” he earnestly asked a blank audience who had been castigating foreign correspondents for not giving a positive image of Pakistan.

Why indeed? Does it behoove us to be pathetically grateful to the likes of the notorious George Galloway for actually liking unlovable Pakistan? Shock and awe. Why so much stress on getting the rest of the world to like us? Rather it may be time to start looking inwards and attempt to iron out the chinks in our armour.