When the victims are buried in mass graves, it’s genocide 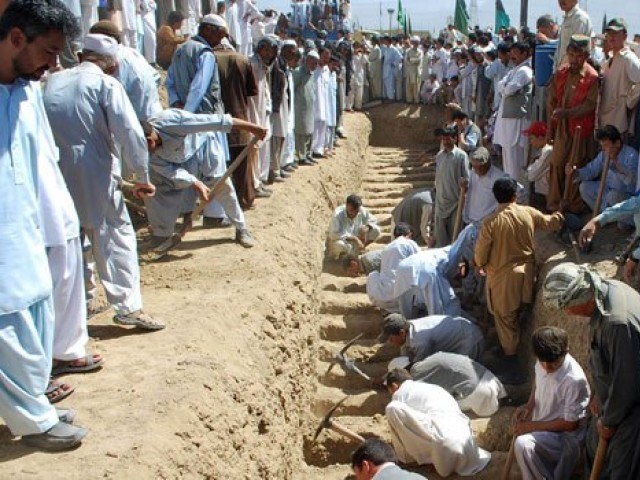 Shia Muslims dig graves for their community members at a graveyard in Quetta, Sept 21, 2011, after their killing in an attack by gunmen. PHOTO: AFP

When they need mass graves to bury the victims, it is time to start calling it a genocide.

I have seen gut-wrenching images of poor Hazara men and women mourning their loved ones who were killed simply for being Shia. I saw horrible images of the scene of violence of the bomb blasts this past weekend in Quetta. But nothing moved me quite like the picture of the mass grave that was dug last month to bury the 93 victims of anti-Shia savagery.

To my mind, nothing encapsulates just how low we have sunk than the fact that we now have mass graves for religious minorities in Pakistan. That Pakistan appears to have begun accelerating down the horror show that was foretold in Pastor Martin Niemöller’s wise words is not what troubles me, nor is the fact that the only appropriate analogies that one can use about the situation in Pakistan have to do with the Holocaust in Europe.

No, what bothers me is that I cannot see how this stops.

The Germans were stopped from their acts of genocide by foreign powers invading and occupying their country and then staying put for the next 45 years. But the Germans did not blame the Americans for their troubles. They used it as an opportunity to wake up from the murderous frenzy they had been on and made it a point to educate every single child in Germany why the Holocaust was so horribly wrong that even a hint of movement in that direction needs to stamped out immediately.

It was a massive educational campaign that sought to wipe out all traces of anything that might smell even remotely tolerant of genocide from the German culture.

Does anyone realistically see that happening in Pakistan?

Here is where we stand in Pakistan right now: you can count on the fingers of one hand how many people on television have been willing to call this what it is: the genocide of Shias in this country.

That disconnect between what we need and what we have is what bothers me. Because as genocides go, this is not even Pakistan’s first. And we certainly seem to have not learnt our lessons.

We are the nation that managed to kill 3 million of our own fellow citizens in what was then East Pakistan and have yet to confront the reality of what we did. We only stopped because India invaded and forced us to stop. We are the nation that has yet to even officially apologise for it. We just decided to go on and pretend it never happened. Now when the subject is brought up, people quibble about whether it was 3 million or 300,000.

Not the fact that we went about indiscriminately killing men, women and children?

What the hell is wrong with us?

So I suppose we really should not be surprised that we are now on another genocide. And we seem to be repeating the same mistake as last time: refusing to call it what it is. Are we planning on fixing the problem  this time or are we planning on more genocides to come? All indications point to the latter.

There is one road that leads us out of this hell. But it involves us being honest about the problem. If we try to brush it under the carpet, all we do is lay the foundation for the next genocide.

This one threatens to kill one-fifth of the country.

Anyone want to guess who will be next?