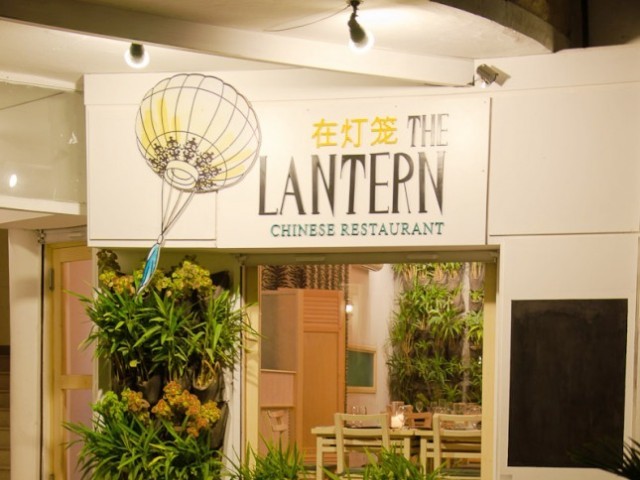 I’m sure with such a dedicated team, the Lantern has the potential to be one of the most sought after Chinese restaurants in Karachi! PHOTO: YOUSUF BAWANY

The power of oriental cuisine is undeniable; we just can’t seem to get enough of it. When out with your wife, ask her what she’d like to eat and five out of ten times, she’d suggest Chinese food.

The Lantern, located near Do Talwar, Clifton, has been open for public for about four weeks now, and the team at Food Connection Pakistan graciously invited me for a bloggers’ meet-up a few days back. This Chinese eatery is a perfect venue for a memorable lunch with friends or a romantic dinner with the wife. It’s interesting that the restaurant has indoor as well as outdoor seating available, catering to the conditioned air lovers as well as customers who enjoy basking in the trademark Karachi breezes.

As soon as you walk onto the driveway that leads up to the restaurant, you are welcomed by a rustic sitting area adorned by wooden chairs and tables. A collection of plants placed at intervals as well as along walls render the space homey and unpretentious, yet tasteful. Besides letting in plenty of natural light, a big glass window lets people on the outside a view of what’s going on inside

A step indoors and you instantly get where the inspiration for the restaurant’s name comes from. Your eye is immediately drawn to the paper lanterns covering the entire length of the ceiling and not one of them is red. In stark contrast to traditional Chinese restaurants, the room feels open, light and airy, with everything decorated in greens and subdued pastels. More often than not, I prefer well-lit spaces where I can clearly see what I’m putting into my mouth, and The Lantern sure fits the bill.

It was interesting to meet the visionaries behind the restaurant; Gulraiz, Saud, Uzair and Ahsan (collectively known as the A-Team). These four individuals went their separate ways after completing their A-levels and converged several years later to solemnise their bond of friendship through the inception of The Lantern.

Yousuf: What was the inspiration behind the name?

A-Team: Well, we just tried out a few names including the Wok-Inn, Red Door and Paper Lantern. Since we wanted the place to feel as un-Chinese as possible, we ended up with ‘The Lantern’. We carried the same un-Chinese theme into our decor as well, the only inspirations being bamboo shoots and paper lanterns. If you look closely, you’ll see that the lanterns used in the restaurant are plain paper lanterns and not the bright-red Chinese lanterns with tassels underneath. Also, the table settings are very rustic and lack the oriental touch.

Yousuf: Don’t you think there are enough Chinese restaurants already?

A-Team: In our experience, Karachiites love Chinese food as much as they love BBQ, if not more. Plus, there are very few Chinese restaurants in the Clifton/Defense area so opening one here seemed like a wise decision.

Our service is another area where we can distinguish ourselves from our competition. Unlike other restaurants, we take customised orders and have no qualms preparing anything that can be made within the confines of our kitchen.

If we have the ingredients, we’ll make it for you; if a specific dish is served with beef but you prefer chicken, we’ll do it for you. A couple of days back, a customer requested some vegetables with oyester sauce and we served it to him; he really appreciated this gesture and we won over a loyal customer. We are not reinventing the wheel here, just trying to elevate conventional Chinese cuisine to a whole new level.

Yousuf: What are the team dynamics here? How do you get along with your staff?

A-Team: The average age of our staff is about 23-years, so we have a very young team, open to improvement and evolution. We come here to work and have fun. We are not rigid, rather ready to adopt new ideas with time, learning, trying to figure out what works and what doesn’t. Our team has provided a lot of feedback and ideas into what you are seeing around you at the moment.

Yousuf: So what are your plans for the future?

A-Team: Well, there are a few things that we’d love to take care of down the line. First and foremost, we’d love to add a few exotic items to our menu, including Duck. Next, we plan to open a second kitchen that will cater to home delivery orders only; the existing one is running on full capacity for dine-in orders.

The Lantern’s menu is deceptively simple and elegant, yet it manages to cater to vegetarians as well as non-vegetarians (seafood, chicken or beef aficionados). In my experience, the larger the menu, the harder it is to decide what to order.

The menu features several dishes with a ‘gravy optional’ choice; personally, dry items are more appealing to me as that way, you cannot camouflage the taste of the dish behind a veil of sauces.

After careful evaluation of the menu, I decided to skip the cliché soup and go straight for the appetisers; talk about challenging the norms of our society. On Gulraiz’s suggestion, I ordered some deep fried chili prawns, served with sautéed Thai chilies and spring onions, a garnish of julienne vegetables and some oriental sauce on the side.

This was perhaps the most Pakistanised of all the dishes I tried that night, and I totally mean that in a good way. The prawns, infused with chili, were crisp and spicy, fine on their own but a revelation with that exquisite honey-based oriental sauce. The balance of sweet and spicy, and the aroma that emanated from the platter was extremely appealing to me; I’d go to the Lantern any given day just for that dish. The extra chilies added for presentation were overkill but otherwise, I rate the dish a solid 9 (out of 10).

Sesame prawns on toast, another appetiser that came highly recommended by the A-Team, was by far my least favourite dish of the evening. It’s a chunky prawn paste buttered onto a piece of toast, topped with a generous sprinkle of sesame seeds and deep fried to a crisp. The texture of the toast was extremely interesting; what really put me off was the oil-soaked bread and the overpowering sesame flavor, the prawns feeling like an afterthought instead of being the highlight of the dish. I suggest you make sure the bread is nice and oil-free, cut down on the sesame seeds and let the taste of the prawn shine. I’d give this a slightly disappointing 6.

Then came the entrees and I started off with beef with black bean sauce. This is one of those dishes that grow on you; the first few bites were really OK, but the more I ate it, the more I liked it, so much so that I gave it an 8 on 10. The taste of the black beans really shines through and even though the dish is a little on the sweet side, it certainly is one that you’d probably order next time you visit The Lantern.

When the server brought out what was supposed to be chicken chili dry, I was a bit confused, as it was unlike any I had ever had; it turned out to be an interesting spin on a classic. The chicken chunks – deep fried with a batter coat, covered in a sticky sweet sauce and finished with some green chilies – were extremely crunchy. Even though I was expecting a bit more heat on the dish, the combination, overall, seemed pretty balanced. I’d rate it an 8 out of 10.

The best presented dish of the night, hands down, was crispy beef in bird’s nest. I gave it 8 out of 10 mainly because besides being attractive, it delivered on the taste. The deep-fried strips of beef lightly glazed with a sweet chili sauce were crunchy on the outside, tender on the inside, and just seemed to melt in my mouth; I couldn’t stop eating them. I did experience some problems tackling the noodle nest though, as it was really really tough to break into.

After all the excellent food that I had devoured, I barely had any room left for dessert.

The team insisted I try the fried fruits candy and I’m glad I did. It featured chunks of banana, kiwi and apple, deep fried to a crisp and served with sugar syrup, some icing sugar, some sesame seeds and a pinch of cocoa powder. Even though the fruit was deep fried, the inside of the fruit had not lost its actual texture, and I salute the chef for this feat. I could have probably put the sugar syrup as a dipping sauce on the side rather than lathering the lovely fruits with it, but that’s just me. It was one of the closest things I had ever had to a Chinese dessert, so I gave it 8.5 out of 10.

A decent meal at The Lantern would cost you anywhere between PKR 1000 to 1500 per person (plus tax), which is very similar to what it would at any decent Chinese restaurant in Karachi. The portions sizes could have been slightly bigger as people invariably end up questioning the value for money.

Eating out is one of the few forms of enjoyment for us entertainment-starved Karachiites, and places like The Lantern make it even more enjoyable. What impresses me more is the young, energetic team putting it’s heart and soul into this restaurant, and is willing to learn and evolve from experience.

It was a pleasure watching Gulraiz play the gracious host out front, while Uzair was busy expediting orders in the kitchen, making sure every plate that came out was according to his standards.

I’m sure with such a dedicated team, the Lantern has the potential to be one of the most sought after Chinese restaurants in Karachi!

A word of advice: If you don’t want a new splatter paint job on your car, avoid parking it under that big ol’ tree on the right side of the entrance; your driver/cleaner is sure to curse you while he puts his blood and sweat into cleaning it the next day.