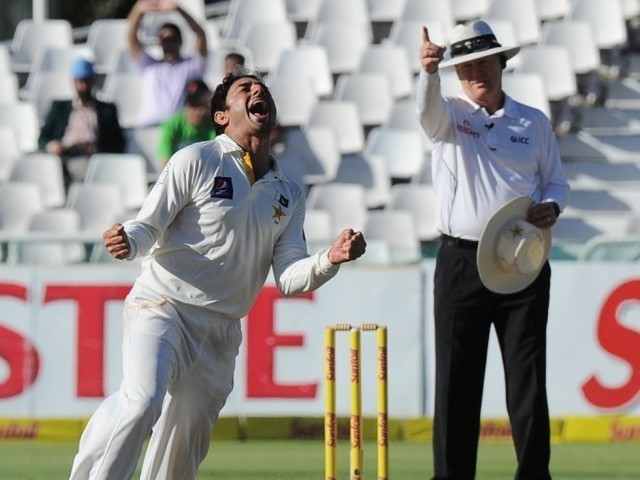 Saeed Ajmal's 10 scalps is a clear indication of the need for a second regular spinner. PHOTO: AFP

So we lost to South Africa in the Test series held in Cape Town. The debacle in the first match in Johannesburg was still digestible, due to the uncongenial conditions, lack of match practice, and the fact that Pakistan normally doesn’t play well in their first match in a series.

However, the fiasco in Cape Town is simply not tolerable, and for obvious reasons.

It was Pakistan’s best chance to level the series, particularly after reaching 338 in the first innings, and limiting South Africa to 110 for 5. It was Pakistan’s game to win, and they squandered the opportunity. Winning or losing is part of sports, but professional teams always analyse the factors behind their losses. Unfortunately, Pakistan keeps on reinforcing the failures.

Here are few reasons why Pakistan lost the Test match:

Let me start with the team selection. From ball one, the pitch offered assistance to spin bowling; and Pakistan let Abdur Rehman – who ranks among the top five Test bowlers – warm the benches. Instead, they opted for Tanvir Ahmad, which is utterly mind-boggling.

Firstly, he never merited to be in the 16-men squad at this late age (34). In Cape Town, his bowling speed was embarrassingly low (125 kilometres per hour) for any medium pacer, let alone a fast bowler of Pakistani tradition. I bet Younis Khan can bowl faster than him. With Decision Review System (DRS) in action, Abdur Rehman deserved to play on the abrasive, dry, and turning surface.

Saeed Ajmal’s 10 scalps is a clear indication of the need for a second regular spinner. Rehman is accurate and he takes wickets on such surfaces. Unfortunately, Pakistan had no other bowler to help Ajmal out.

Secondly, the selection of Sarfraz Ahmad is not impressive as well. It is true that he scores heavily in domestic cricket, but it is unfair to expect too much from a young keeper in an important tour.

Adnan Akmal was doing reasonably well and he should have been persisted. At the moment, Sarfraz cannot score 20 runs, which puts extra burden on an already-fragile batting line-up.

Before this series, Misbah had been doing a reasonable job with the leadership. However, this tour has been a horrible experience for Misbah as a captain; not to mention his poor batting form.

Apart from his influence on the team selection, he made several ordinary decisions, in terms of fielding positions and bowling changes. In the first innings, he allowed too many open spaces for Pietersen and didn’t attack the tail-enders. More importantly, he did not bowl Hafeez on a turning track, especially in the second innings. On a track that offered enough help to Ajmal, it is brainless to give only one over to Hafeez in the second innings, especially if we consider his excellent record against left-handers with the new ball.

Tuk-Tuk rings the bell when you see the Pakistani batting line-up. Barring Younis Khan and Nasir Jamshed, all other batsmen have got a lackluster and defensive mindset. They consume too many deliveries, and score virtually nothing. Consequently, when they are dismissed, they put the incoming batsmen under immense pressure. For instance, in the second innings, Misbah (44 off 111 balls) and Azhar Ali (65 off 193 balls) built up a reasonable yet sluggish partnership.

In the match scenario, if they had scored a bit briskly, and added a few more runs, Pakistan could post a decent fourth innings total. Pakistan should revisit this mindset, and call back Umar Akmal in the Test team, who has the ability to score quickly in the middle order.

It’s time to realise that Umar Gul is not a good Test bowler. It’s time to stop calling him the spearhead of Pakistan’s Test bowling attack. He might bowl yorkers but he does not bowl them in Test matches, and he did not bowl a single in Cape Town and Johannesburg.

Can anyone ask him, why?

Additionally, he is a liability as a batsman, always playing an irresponsible stroke (for example, his first-ball duck in the second innings).

Pakistan has the long tail. When Pakistan loses four or five top-order wickets, its tail begins. Sarfraz Ahmad contributes nothing, and then the last five are the most vulnerable, who can get out within the space of 10 balls. Perhaps, this is the right time for Pakistan to find some bowling all-rounders.

Is there anything like planning in Pakistan’s team management?

In the previous two or three team tours, the Pakistan Cricket Board (PCB) selected Anwar Ali, Haris Sohail, Zulfiqar Baber, Asad Ali, Hammad Azam, Ahmad Shehzad, Umar Amin, Usman Salahuddin and Sadaf Hussain. These youngsters were either not tried or given limited opportunities, only to be dropped in the next team tour. On the other hand, some players, such as Imran Farhat, Mohammad Sami, Yasir Arafat, and Faisal Iqbal were given numerous chances, despite their continuous failures.

As an example, the third One Day Innings (ODI) against India was a dead-rubber, but the team management didn’t try new players, only to drop them for the South Africa tour.

Is there any need to mention the fielding and the bowling disciplines? In Cape Town, they dropped at least three catches, and took a wicket off a no-ball.

Ironically, this is precisely the margin of victory; South Africa won by four wickets.

Thank you Faf du Plessis for showing us that the ICC cares... about you!