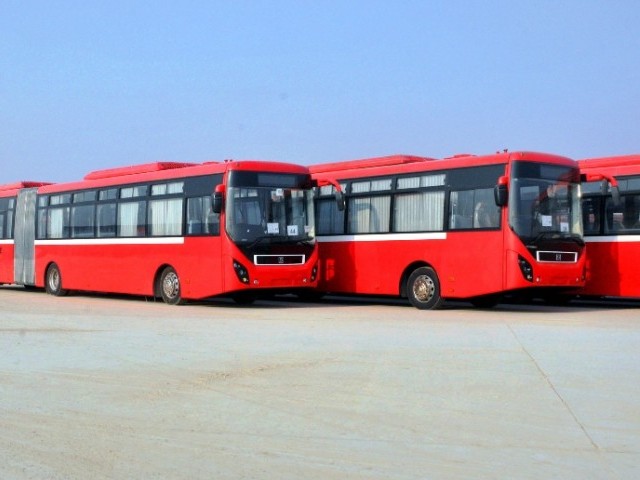 Lahoris, the wait is finally over!

The complicated and tiring ordeal that we were all experiencing for eleven months has finally met its end.

Yes, I’m talking about the completion of the revolutionary metro bus system in Lahore. The Metro Bus Project is a monumental achievement for the Punjab government which is going to change the traffic culture of Lahore forever.

Taking detours and looking for shorter diversions had become part of every Lahori’s life in the last one year. Because of the construction of many underpasses, flyovers and bus tracks, it would take people forty minutes to cover a distance which would normally take fifteen minutes.

This is now to change!

Let me tell you about some of the features of this new public transport system planned and implemented by Shahbaz Sharif.

A total of 45 buses have been imported from Turkey which will be driven by Turkish drivers on a single track in Lahore. The buses will stop at 27 stations that cover the entire Lahore. First station is at Gaju Mata and the last one is at Shaadra.

A one-of-a-kind nine kilometer long flyover has been constructed solely for the metro bus. It connects one end of Lahore with the other. Buses will commute on this flyover. The modern system of electronic ticketing has been introduced at all the stations; waterproof escalators have been installed for the elderly, and a squad for security and maintenance has been appointed.

The stations and the entire route of this larger-than-life metro system are up to international standards. Commuting in Lahore will now become as easy as commuting in London city or Bangkok. The only difference is we will have buses instead of trains and they will be manual instead of electronic.

The inauguration of this mega project is today.

After being postponed a couple of times, Shahbaz Sharif has finally given the confirmed date. For the initial four weeks, the buses will be free for all the commuters. However, the fare is extremely cheap. From what I’ve heard, the cost of a ticket from the first to the last station will be as low as Rs45!

Until now, every feature of this yet-to-function project seems to be perfect, but will it be successful?

Will the squad for maintaining cleanliness and security live up to the expectations?

Will all the 45 buses work efficiently for a long period of time?

Most importantly, how will the masses react to this state-of-the-art system?

If I were to predict, I’d say that initially the system will face a host of problems.  The kind of people we are makes it difficult for us to adapt easily to change.

We are more than comfortable in breaking rules – especially spitting paan everywhere. We like to take shortcuts and do not like cleaning up after ourselves.

I think all of this could mar the success of the metro buses; however, I feel that with the passage of time, people will get accustomed to the idea of waiting in queues and keeping their surroundings clean.

Heavy criticism has been leveled at this project, but as with the motorway – which everybody uses now – condemnation is part of the package. Most people aren’t fans of the project, but I personally believe that this system does not need only the support of the masses, but the educated class as well.

We should promote and endorse this project by travelling via these buses. We as a nation are masters at criticising politicians. When we witness power outages, terrorist activities or inflation, we spew hatred against the system.

Now, here is the chance to encourage our leaders, because finally something has been done for the people and not for personal gain.

The success or failure of this enormous project lies in our hands. I will be showing full support to this revolution by commuting on this bus.

A marketing manager at a leading management consultancy firm, Saman also works as a freelance writer for various lifestyle magazines. She tweets as @s_as

Pakistan imports illegal Dish TV from India but refuses to rid itself of ancient cable operators?