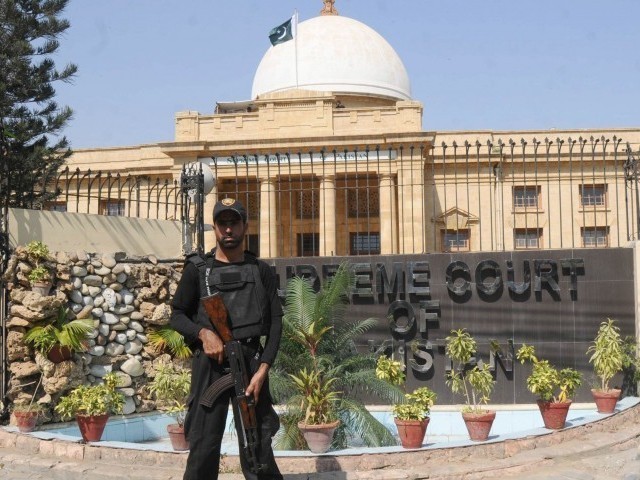 I decided to go to the Supreme Court hearing on the contempt case that has arisen from the Karachi violence suo motu case. PHOTO: RASHID AJMERI

There is a very tiny bow at the back of the police-blue beret that sits stiffly peaked on Fayyaz Leghari’s head. I have a good view of the inspector general’s fine head of hair and his pale cream jowl as he turns to whisper into Waseem Ahmed’s ear from time to time.

Waseem Ahmed’s title is as long as his wild-west moustache – additional chief secretary for the home department. But all you need to know is that he used to be the chief of Karachi’s police.These two gentlemen are in Justice Jawwad Khawaja’s court and they are a whisker away from jail time for contempt.

I decided to go to the Supreme Court hearing on the contempt case that has arisen from the Karachi violence suo motu case. I have been personally interested in it ever since I started editing the story when it surfaced more than a year ago when Karachi saw one of its bloodiest summers in 2011.

The chief justice took up the matter and the police and Sindh government were given a laundry list of changes to make in order to stem the tide of blood.

They are in court today because they haven’t done one damn thing.

Anyone can walk up to the Supreme Court registry in Karachi. It is located right bang opposite Shaheen Complex. Come early at 9am and park your car next door. Walk over to the gate. Inevitably, some police wallah in plainclothes will stop you. This is where it gets tricky. In response to the “Ji, bibi, kahan ja rahi hain?” question, I pulled out my press card. I’m not sure what kind of response an average citizen would get, but they should technically allow anyone in to hear the case.

Walk through the gates and to your right deposit your CNIC in exchange for a visitor’s pass. Head up to the flight of stairs on the right of the building and take the door on the extreme left. You will have to get your bag checked inside the small hallway and deposit your cellphone for a numbered chit. Take the door to the left and you will be in the courtroom.

It was smaller than I expected, with a raised platform for the four-judge bench with their high-backed fancy chairs. A rostrum directly in front has a microphone, desks flank them on both sides.

The floor is carpeted, there are ACs and tube lighting, a portrait of Quaid-e-Azam stares benignly and detached from high above. Benches padded with cheap black square cushions line the aisle. They seat five people and here’s a tip, sit in the exact middle otherwise you will have a parade of bums brush past your face as they keep getting up to get out as happens in the cinema or airplane.

The newspaper reporters have taken up to the left of the room, where they stand in a huddle taking notes. The TV reporters stand to the right and closer to the exit because they have to keep rushing out to dictate tickers.

Kaka after kaka comes in with staircases of sarkari files – the kind with a hard backing and white cotton azaarband that you use to tie them down on top. Some of the files are brought like dekchis of biryani, trussed up in cloth that is held from the four corners and tied on top. These stacks and stacks of papers, files, reports, books, start going up like shaky white columns on the judge’s bench, the tables below, the tops of the benches behind.

I came early so I decided to sit on the left in what I thought was a free bench. Unfortunately Manzur Mughal, another top cop who has been in the Intelligence Bureau, recognised me, said hello and jumped seats to squeeze in next to me.

This brings me to my second piece of advice for women coming to the Supreme Court – bring two handbags, large ones. Use them to wedge between yourself and the men sitting on both sides so your thighs don’t rub against each other – for they will try. And for anyone who knows me, I have a large Mary Poppins carpetbag, which I firmly deployed to keep Mr Mughal far apart.

He was wearing a camel-coloured corduroy blazer and a head full of Kala Kola. And as far as cops go, he is the maila-est of them all. It’s in the voice. That deep raspy baritone comes from somewhere so deep in their body that it feels like a violation of your airspace.

“Aap hans rahi hain police pe,” he asked me with a lascivious snarl.

(Are you laughing at the police?)

(Are you having fun?)

His question came after I had snorted in derision when yet another police officer had failed to answer the judge’s question, making a fool of himself. Mughal was clearly unable to find any other point of conversation, so he chose to pick this as an entry.

“Mujhe police pe afsos ho raha he,” I answered and turned away.

(I feel bad for the police)

Mughal, it appeared to me, had come to just watch. He had no stakes. The two men in the dock, Fayyaz and Waseem, were more worried.

As the judges went through the reports they leafed through the papers, trying to find the exact point the judge had taken up. From time to time one of their junior officers leaned over to help them flip to the right page.

The hearing was a painful one.

I became a big fan of Justice Jawwad. For one, he’s perhaps the only judge with a gray ponytail. He would hold up his palm to silence the fumbling officer in front of him. He would lean back and dictate in lower tones parts of the Supreme Court order after each point was tackled, questions were asked, answers were given (or not in this case). I enjoyed Justice Khilji’s no-nonsense denuding of the hogwash that the police tried to feed the bench.

“The flecks of the blood of the police martyrs are on your daaman!” he thundered to the police officers.

It was because they were not doing their job that innocent men in uniform were needlessly dying.

At the end of the three hours I was eager to leave. I was sickened of hearing cop after cop give flimsy excuses. They have done nothing to push for more gun control, bring in a witness protection programme, tackle the illegal immigrant issue, collect better evidence to prosecute cases. All of the witnesses are dead in the Wali Babar reporter murder case. 14 bodies are piling up on average daily.

I left the courtroom feeling let down and dirty.

I had gotten too close to the ugliness and apathy.

The hunt for Karachi’s constituency map