There is a secret in Lahore, a mystery we can never decipher… 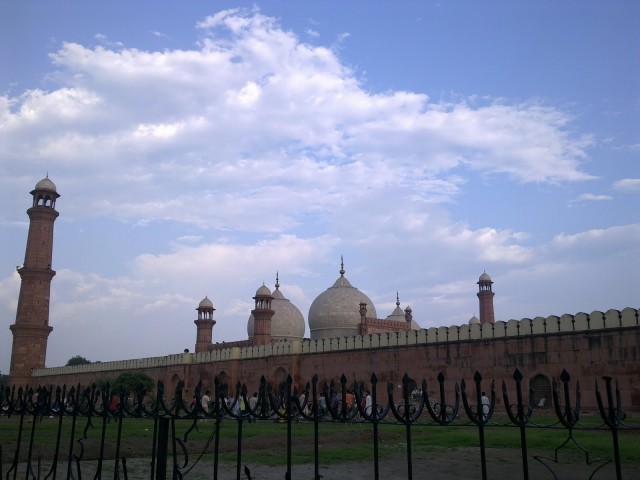 From the smug socialites to the joyful faces of street children playing together, there is a secret in Lahore that keeps the equilibrium in its steady state. PHOTO: SAID CHAUDHRY

The Lahore I’ve deciphered in the past six years is one that has everything to offer – from the tolerance and beauty of its people, to all its imperfections. I made it a point to explore the city in and out, and have often resorted to using any form of transport available.

There is something mischievously funny about pulling outside Café Zouk in a rickshaw or being harassed by the guards at Avari despite being a gold member. After all, who could imagine a group of foreign medical students muttering away in their English accents with each other and then bargaining in Punjabi with the rickshaw drivers for overcharging us Rs50? All this while we were talking about how we need to stop eating at Fujiyama because it’s getting too expensive. I guess that’s enough to raise an eyebrow or two. The new Food Street in Lahore is home to 27 restaurants, most of them serving barbecue and a few serving Chinese cuisine, and opened in January. PHOTO: EXPRESS/FILE

There is a comfort of being at ease no matter which corner of the city you’re in. Nine out of 10 people you meet will look angry to you, but if you smile at them, they will always smile back. Zinda dil (lively) enough defines this city.

It’s an amazing place – surprisingly clean, with endless mazes of inner streets which house thousands of small shops all selling clothing. It is a market free of name brands and the corporate filth. You can almost taste the freedom. One of the many buildings in Lahore’s red light district. PHOTO: FARAHNAZ ZAHIDI/EXPRESS

I’ve seen the dancing girls, and the pimps and heard their lucrative offers. I’ve imagined Mick Jagger and Salman Ahmad walking about the same streets after the 1996 cricket World Cup Final. This is the scene of a painting depicting Heera Mandi, by Iqbal Hussain. PHOTO: WAQAS NAEEM/EXPRESS

I’ve seen the walls that guard the city of Lahore; the history that their stature exudes never ceases to fascinate me.

I’ve seen the Gurdwara and the Badshahi Mosque side by side, and I’ve often stood on top of Lahore’s famous eatery Cuckoo’s Den, overlooking the view and wondering how beautiful the religious harmony must have been in the 17th century, when the Sikhs and Muslims never dreamed of a separate homeland for each other.

A Gurdwara and the Badshahi Mosque together

A view of Eid prayers at the Badshahi mosque. PHOTO: SHAFIQ MALIK/EXPRESS

I’ve seen the beauty of all the seasons that Lahore offers. The winters are normally mild, but it does get cold enough for sweaters and jackets in the mornings and nights. Nothing can equate to the feeling of the warm sun and a hot cup of chai after morning lectures at Allama Iqbal Medical College. Sitting in the lawn and soaking the sun never felt any better than this time of the year. Also equally satisfying is huddling around a gas heater early in the morning.

Winter also brings with it certain foods that Lahoris prefer seasonally. Fish is a big winner here and while Bashir (a popular fish joint) may still be the best place to eat fish in Lahore, healthy competition is brewing elsewhere too. My personal favourites of the season are gajar ka halwa, petha halwa and the best of all saag.

The beautiful spring always brings out the bloom in Lahore, more so in my neighbourhood — Cantonment. Polo matches with a 5:1 ratio of women and men in attendance is always a spring special.

The intense heat of the summer from May to July is often unbearable, but a thandi lassi (chilled yoghurt drink) refreshes you like none other ever could; it also puts you to sleep like a baby.

Afternoon naps are a tradition in Lahori summers. End of July and onward, the heat is coupled with the boisterous thunderstorms of the monsoon season. Relief from heat is blatantly obvious when rain comes pouring down- it is visible on everyone’s faces as their mood is elated and the traffic also increases accordingly. Everyone wants to enjoy the good weather outdoors, but the minute it rains too much, everyone will gal-galoch (curse out) because all the water refuses to drain out!

All the little towns inside Lahore have so much to offer. Iqbal Town, Faisal Town, Garden Town, Johar Town, Wapda Town, Gulberg, Defence, Shah Jamal, Gawal Mandi and all the other prominent places are imprinted in the back of my mind like a map.

Heck, I even went to Tollington Market in Ichra once.

Compared to Lahore, has any other city in India or Pakistan produced more talented and diverse individuals who have shot to fame in their respected field of work?

There is a bustling energy and a cultural fusion that Lahore creates in itself. There is this unabated energy which gives rise to such free thinking and innovative artists and scholars.

The Sufi poet Bulleh Shah roamed these streets trying to search for the meaning of life. Shah Hussein expressed his love in poetry whilst wandering the same Lahore. Shah Jamal spread the spirit of Islam from Lahore, and his disciples still sing and dance in his memory. One of his most prominent followers is Pappu Saeen – a folk artist like no other who showcases his amazing talent of dhol-playing while high on bhang every Thursday. This is a show you won’t find anywhere in the world.

Lahore is and has always been a focal point in the history of South Asia. It is a secret that’s only known to those who have dared to enter the city and explore it. Its intensity is palpable in the creativity of the people it has produced and the proud institutions that produced them.

Lahore is home to many educational institutions – from the ancient walls of Government College University and King Edward Medical College, to the recently built green and quiet campus of LUMS, a pioneer of excellence in business education.

The immensely talented art students at National College of Arts (NCA) and the newly built liberal arts university, Beaconhouse, aren’t behind either. From the crafty University of Engineering and Technology, to the world-class presenters in fashion design from Pakistan School of Fashion Design (PSFD) and Aitchson College, Lahore has so much to be proud of.

There is the delicious chana poori at Capri, roasted chicken from Rahat Bakery, the various unhygienic types of snacks vendors sell on the streets, and even fine dining and luxurious restaurants; things that make Lahore rich in flavour.

From the smug socialites to the genuine joy on the faces of street children playing together, there is a secret in Lahore that keeps the equilibrium in its steady state.

Lahore has something special to offer in all of its corners.

There’s a love that calls for its people to rise; there’s a dream that awaits its people to evolve, yet Lahore remains a mystery that may never be solved. And the love for that mystery burns the fire inside every Lahori’s heart.