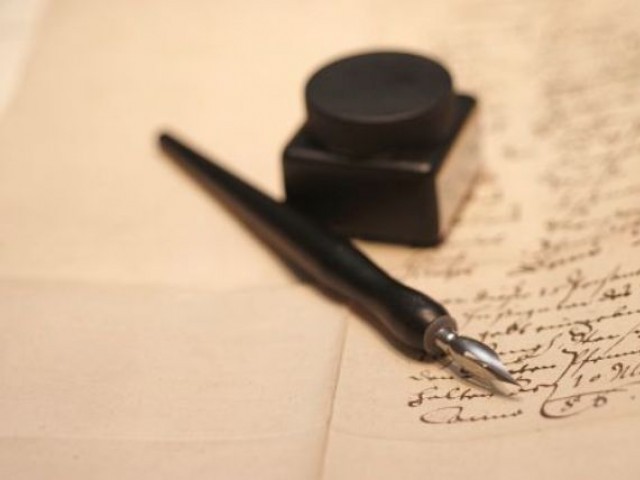 These letters were a mechanism to articulate all of the ideas and sentiments she'd kept bottled in.

One memory from my childhood was watching my mom sit at the kitchen table with a pen and stack of lined loose-leaf sheets of paper to write one of her three sisters a long letter, handwritten in attractive Arabic script.

This was one of the only activities that could draw my mom away from her rigorous daily routine of managing every family affair and caring for three daughters with boundless dedication.

Taking the time to write letters was a rare respite for our supermom.

She would become immersed in her thoughts and intently focus on the blank sheets in front of her, as well as the multi-paged letter she’d received in the mail a day or two prior and was then replying to.

For more than an hour, swiftly and with ease, she would craft page after page of prose, pouring onto the paper the multitude of thoughts and feelings that she had stored in a crevice of her mind for the months, if not more than a year, since the last time she sat down to write to one of her sisters.

Most of my childhood years were spent on Canada’s prairies and the West Coast bordering the Pacific Ocean. This situated my mom literally a world apart from her sisters, who hadn’t strayed from their childhood home on Egypt’s coastline along the Suez Canal and Mediterranean Sea.

Long-distance phone calls, costly and impractical, were reserved for religious holidays such as Eidul fitr, the celebration marking the end of Ramadan, the Islamic month of fasting. These infrequent conversations would end as quickly as they started. My mom was constrained to giving her siblings short and impersonal greetings in the 10 minutes or less they had of airtime.

Meanwhile, our family trips to Egypt were few and far between, a stretch of several years separating each visit. When mom did get together with her sisters, we (her daughters) would suddenly cease to exist. They would seclude themselves in the bedroom or balcony for hours of gossip, uproarious laughter and heartfelt embraces.

In the lifetime separating these scarce encounters, it was indeed only the long, lovely letters that bridged the distance between my mom and her sisters. Mom would become visibly excited when the mailman would drop off a red-and-blue airmail envelope, the front adorned with Egyptian postal stamps and her name written in messy English cursive.

She never shared what she wrote in her letters, nor about the responses she received from our aunts. I always imagined my mom expressed herself with passion and emotion, especially given how rare her communications were with her family. She would wait patiently for months to receive word from her home country. These letters were a mechanism to articulate all of the ideas and sentiments she’d kept bottled in.

It’s been many years since I last saw my mom write a letter.

With modern technology, chatting and video calls have narrowed the divide between her and her siblings and offered a new channel of communication.

Yet I’ve always admired the art of writing letters, and yearned to receive and write my own magnificent handwritten notes, crammed with the thoughts we may not express in words in our daily lives, even if they form an integral part of how we feel about our loved ones.

I recently opened an email account for my mom and taught her how to compose messages to my sisters and I so we could stay in touch while she is travelling. In the first few days, I would have her practice sending me messages while I was at work and she was home in my apartment.

It became clear very quickly that mom’s emails carried a special quality, far removed from the mundane messages I’m used to receiving. The passion with which she wrote shocked me. Her opening greetings were thoughtful and dear, and she expressed herself earnestly and sincerely, as though the words she typed came straight from that crevice in her mind where she stored those innermost feelings reserved only for letters, not daily expression. I choked back tears on more than one occasion, as did my sisters.

“Mom writes emails like people used to write letters,” my younger sister quite aptly said upon receiving her own lovely electronic letter from our mom.

My mom has never had an email account, or access to a Facebook “Like” button that gives us the option to avoid sharing even basic feelings. She isn’t on Twitter condensing her emotions to 140 characters or less, nor does she use WhatsApp, on which it can sometimes take a day to relay a thought that a phone conversation could have accomplished in less than two minutes.

I have, quite inadvertently, found myself getting a glimpse of what it must have been like to be at the receiving end of one of my mom’s long letters. Rather than a ballpoint pen and loose-leaf paper, she has a compose button and a keyboard. Her animated style is untainted by the world of electronic expression that has in many ways made the way we communicate inexpressive and dull.

Each day now I look forward to my mom’s short and sweet notes, and hope I’ll be able to share my own sentiments with even a fraction of the luminous colour that she does.