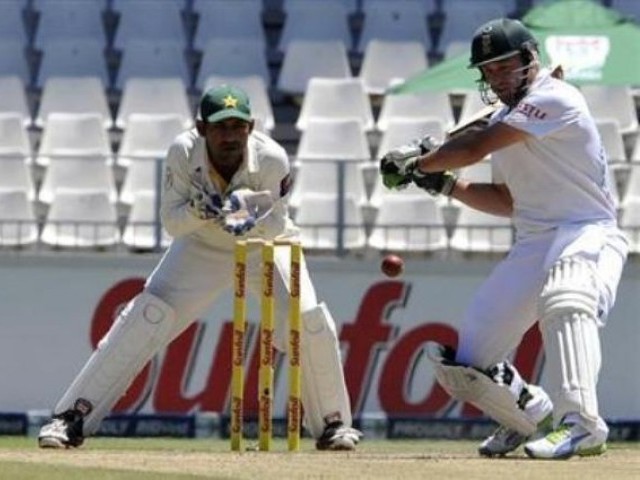 Despite promising much, the Pakistani cricket team could deliver little against the South African juggernaut.

It was a sound thrashing and a reminder that despite their resurgence over the past couple of years, the tourists have still got plenty to learn.

A number of things went wrong for Pakistan right from the beginning.

Starting with team selection, Rahat Ali – who was only sent as reinforcement – was chosen ahead of the first-choice Mohammad Irfan and Ehsan Adil. Regardless of the fact that his bowling was mostly ineffective, it is the manner of his selection that should raise serious questions.

Irfan and Ehsan Adil must be wondering why they were even selected in the first place!

Graeme Smith’s decision to bat first in bowler-friendly conditions had given Pakistan a huge opportunity to run through the hosts’ strong batting line-up; however, Umar Gul, Junaid Khan and Rahat all failed to exploit the conditions to their advantage.

Gul and Junaid did pick up a couple of wickets each, but they could have picked up more had they bowled to a fuller length thereby allowing the ball to move in the air – something that Dale Steyn did to good effect.

Pakistan still did well to restrict the Proteas to 253, thanks to a magical spell by Mohammad Hafeez.

A great deal was expected of Pakistan’s batting line-up which has certainly displayed plenty of resolve over the past two and a half years coupled with a willingness to stay at the pitch for long hours; however, South African bowling was perhaps too fiery for them to handle. Their dismal performance once again exposed the inadequacy of Pakistan’s domestic cricket and of course the inexperience of the touring batsmen who simply had no answers to the probing line bowled by Dale Steyn and Co.

By the time the South Africans went out to bat the second time around, the pitch had eased out. With rain being a possibility over the next two days, the need of the hour was to stifle the batsmen for runs and in the process try and delay the declaration; however, the bowlers seemed to have lost all the venom and continued to concede easy runs. Even the otherwise-wily Saeed Ajmal looked extremely flat.

As a result, South African batsmen scored at more than four runs per over and gave their bowlers ample time to dismiss Pakistan for the second time.

Pakistani batsmen did fare better with the bat in their second outing but the performances are largely irrelevant considering the fact that it was already a lost cause.

The half-century notched up by the talented Asad Shafiq might encourage a few but his actual temperament will be tested in pressure situations.

The real disappointment for Pakistan was the experienced Younis Khan.

Despite having a modest record in South Africa, he was expected to lead the young batting line-up by example; sadly, the veteran failed to put his hand up when it was most needed.

There were a few positives as well; Sarfraz Ahmed was a refreshing change behind the stumps as he – in stark contrast to the fumbling and faltering Akmal senior – looked extremely tidy and safe. He could not perform with the bat but his exploits at the domestic level suggest that he will come well sooner rather than later. Nasir Jamshed looked at ease for as long as he was at the crease.

Lastly, Pakistan’s catching – which has so often been a cause of embarrassment – was excellent in this Test match.

Despite the beating, Pakistan should not lose heart; they are not the only team to have been shot out for under-50 in recent times. The Australians were gunned down for 47 just over a year ago and the Kiwis were skittled out for a measly 45 only last month.

The team has availed the opportunity to get some confidence back against the Western Province Invitation XI before the 2nd Test starts in Cape Town; however, it has to be realised that even batsmen as celebrated as Inzamamul Haq, Mohammad Yousuf and Saeed Anwar have failed to excel in such alien conditions and hence the only way Pakistan can compete in this series is through its bowling.

It should also be kept in mind that the likes of Umar Gul and Junaid Khan do not possess the fearsome pace of a Shoaib Akhtar or a Waqar Younis hence it would be unwise for them to try and blow away the South African batsmen; rather, it would be better if they can focus on maintaining an impeccable line and length and cutting down on loose deliveries forcing the hosts’ batsmen to make mistakes.

Saeed Ajmal is perhaps struggling to come out of his limited-over mode; he should bear in mind that historically, the South Africans have been suspect against quality spin and therefore if he can change his line of attack from around-the-wicket to over-the-wicket and manage to add a bit of flight to his deliveries, he can actually be the trump card that Pakistan is looking for.

Coming to the umpiring, this Test match was a bad advertisement for the Decision Review System (DRS). The decision-making on referrals was extremely inconsistent, in fact bordered on outrageous.

The International Cricket Council (ICC) would do well to take immediate notice if it wishes to make DRS a permanent feature in international matches.