Why have we made news entertainment in Pakistan? 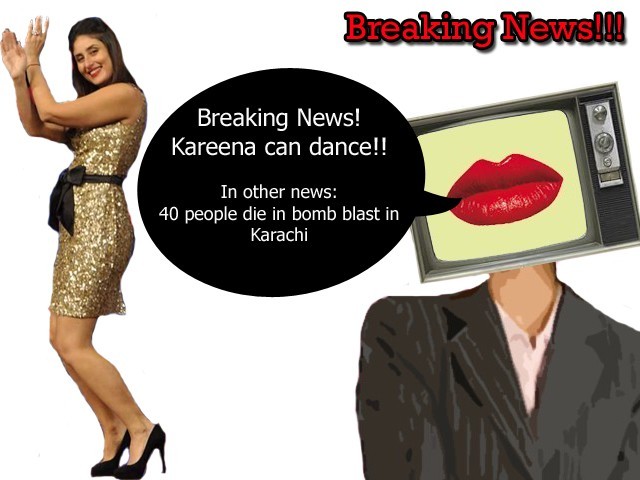 Headlines like -this many died from a bomb blast- are usually followed by another headline like Kareena Kapoor now knows how to cook ‘masoor ki daal’ accompanied with a short video of Kareena wiggling her belly on TV. DESIGN: ERUM SHAIKH

There was a time when televisions in Pakistan received just one, state run channel. The only news that got through to the masses was one deemed ‘fit’ for the public by the state/government.

Any and all events that could prove detrimental to the government’s popularity were not allowed on TV.

This was a time when democracy was suffocated; ‘free and independent’ media did not exist.

Ironically, it was in a dictator’s rule that media was ‘liberated’ and channel after channel emerged on our television screens. The fact that our electronic media comprises mostly of news channels is a consequence of decades old dearth of free and independent news reporting.

Many became anchors, reporters and even more became analysts.

This made room for several qualified journalists and experts to come on TV and play their role in the evolution of democracy, simultaneously it also brought some inept anchors and unqualified ‘experts’ to our homes through the window called TV.

Television became a certificate of analytical ability, for anyone who is called on a talk show in the capacity of an analytical expert is deemed to be one. News channels run 24 hours seven days a week. From a time when news was censored, altered and moderated before being conveyed to public and when there was more news and less time or opportunity to report it, we now have come to a time when there is more time and opportunity to report than there is news.

Understandably, our news media is only in the early steps of its long journey to becoming responsible and mature. However, there are certain aspects that ought to be done away with early in the journey.

The callous race between channels to be ‘the first’ at a happening – even if the event is as vile as a bomb blast that has resulted in the loss of lives of our country men, news channels seem to care most about the fact that it was them who first got to the site of this monstrosity.

Talk shows that become court rooms — ideally the role of a talk show host is that of a moderator but we usually find hosts wearing an invisible judge’s robe and more often than not they enter the session with a pre-established opinion and instead of trying to ascertain a fact or theory they end up trying to enforce their own pre-conceived notions.

The unwritten obligation of having some news from our neighbour’s film industry – regardless of how insignificant or non-newsworthy an event is, news channels deem it necessary to include something, anything from Bollywood and the opportunity to add a minute long clip of a sexy Indian actress dancing, to their headlines.

Headlines like – this many died from a bomb blast, ABC party decided to challenge elections, Pakistan decides to go ahead with such and such foreign policy- are usually followed by another headline like Kareena Kapoor now knows how to cook ‘masoor ki daal’ accompanied with a short video of Kareena wiggling her belly on TV.

The words absurd and obnoxious just cannot do justice to this idiocy.

Sensationalism — the use of thrilling music while breaking a news that by no definition is ‘breaking’ is nerve wrecking. A country already bordering on paranoia is in no way benefiting from this irresponsible use of ‘breaking news’ and ‘news alerts’. I recently saw a breaking news on one of the private news channels that ‘broke’ this news to me that someone had stolen an instrument from their recording equipment and sold it. This pettiest of news did not lack the trademark thrilling music and zoom in zoom out.

Sheer irresponsibility regarding what is being conveyed to the public – ignorance as to the accuracy or inaccuracy of a fact or assertion seems to become a growing trend.

For instance for some time now I have been observing several anchors on several channels referring to MFN; most favoured nation status (a term in international economic law implying certain privileges and preferences in terms of trade) as most ‘favourite’ nation. This apparently minor mistake majorly distorts the meaning and implications of granting MFN status to India.

As a consequence something that may otherwise prove beneficial to both India and Pakistan is largely deemed as a foolish policy decision by Pakistan.

Maybe we were better off with the government administered media- at least our dignity as a nation wasn’t on the line every time there was breaking news.