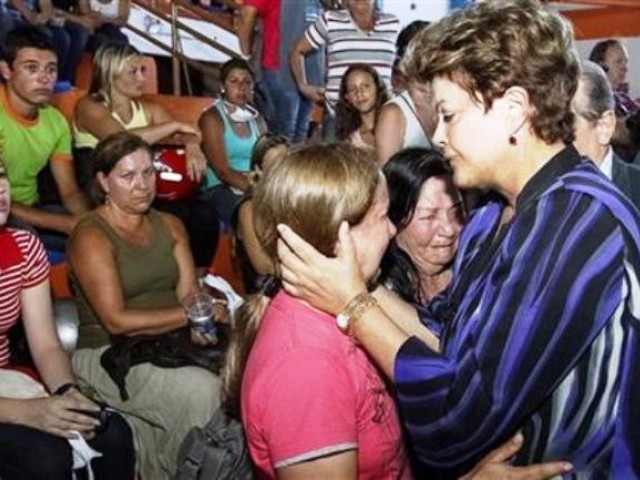 President Dilma headed straight for the town of Santa Maria to personally oversee the response and to comfort the families. PHOTO: REUTERS

The nightclub fire in Brazil that claimed close to 250 lives inevitably brought back memories of the garment factory fire in Baldia.

The sheer horror of it, the pain of the weeping families and the apparent negligence and mismanagement by the nightclub owners all brought back to mind the tragedy that occurred in Karachi on September 11, 2012.

As with the factory inferno, fire codes had been ignored, emergency exits had been blocked and, in essence, the terrible catastrophe could easily have been avoided in Brazil as in Baldia.

Then the similarities ended.

Brazilian President Dilma was on a state visit to Chile and the moment she heard the news, she held an emergency press conference, cut short her visit and took the next flight home. Once in Brazil, she headed straight for the town of Santa Maria to personally oversee the response and to comfort the families.

How many of us recall the response of our Prime Minister to the Baldia fire?

A busy man, he took time out from the pressing task of running the country and took a helicopter flight over the factory four days later.

That’s right, a helicopter flight much like the ones they take over flood-affected areas.

Don’t scoff, the fire department had used a great deal of water in putting out the fire, which inevitably resulted in a large number of puddles. Surely we can’t expect the premier to soil his shoes by descending to our level now, can we?

Of course he did show up in the much drier hospital to have the traditional photo op with the survivors. His brow, and those of the other luminaries were also carefully furrowed to show their concern.

This is no small effort because, as we know, it takes 42 muscles to frown. Of course, PM Ashraf has kept up his interest in the case and has even tried to intervene in the proceedings – by trying to get the murder charges against the owners dropped, that is.

When the Sandy Hook shootings took place in America, we saw a tearful President Obama step into the role of consoler in chief, mirroring the feelings of the American people and offering them, if not solace, then at least empathy.

It doesn’t matter if the tears were genuine or not.

It doesn’t matter that there was nothing he could conceivably do to ease the pain of the affected families.

All that really mattered is that he took the time to be there for the people who elected him.

During the Great Depression, American president Franklin Delano Roosevelt became famous for his ‘fireside chats’. Faced with opposition to his policies by a powerful Republican party, he decided to take his case directly to the American people in a series of 30 radio addresses. Whether it was economic reform or war with Japan, FDR spoke directly to the people, offering hope and strength in a time of crisis.

I’m not a big fan of comparing Pakistan to other countries.

Differences in history, cultural experience and many other factors make such comparisons clumsy at best and dishonest at worst. But in these cases, a comparison is called for.

In the past five years alone, Pakistan has suffered through crisis upon crisis. We have seen our children blown to pieces by the bombs of terrorists. We have seen dozens shot dead on a daily basis. We have seen an unprecedented power crisis and an economic downturn that has brought many to the edge of starvation.

We have never seen our leaders actually step up and just once, talk directly to the people. We are not stupid. We know there are no quick fixes. We know that the crises that have taken decades to mature cannot be solved in a year, or even five years. But we do deserve a leadership that, at least, pretends to care.

Roosevelt was the only American President who was elected to more than two terms, and he would have gone on to win another term had he not passed away. Obama’s own approval rating soared to 57% in the aftermath of his handling of Sandy Hook, his highest rating since the death of Osama Bin Laden.

Had this government, even once, offered its shoulder for us to cry on it would have gone a long way in ensuring its re-election. It seems that even long-term political self-interest is alien to these people. Short-term survival and personal aggrandizement and gain are the only motivators here.

Their disconnect from the people of Pakistan is so wide that it’s almost incomprehensible.

The Hazaras of Quetta sat in the cold for three days, changing the shrouds of their slain loved ones when they became stained with blood. Had the leading lights of our government even an ounce of humanity or a shred of dignity between them they would have been there with them on the first day.

They would have shared their sorrow, wiped their tears, let them vent their rage and in doing so, let the rest us know that they cared. Instead, the protesters were left to sit in the streets for days, alone and unheard.

On the last day, when the PM finally deigned to visit, we had a tweet from one of the Bhutto-Zardari scions saying she was ‘proud of her PM’ and that ‘democracy listens.’

Could there be any statement more insulting in its sheer callousness?

We Pakistanis are fond of saying that we only get the kind of governments we deserve, but no one, no one deserves leaders like these.