Will Afghanistan see civil war after the US exits? 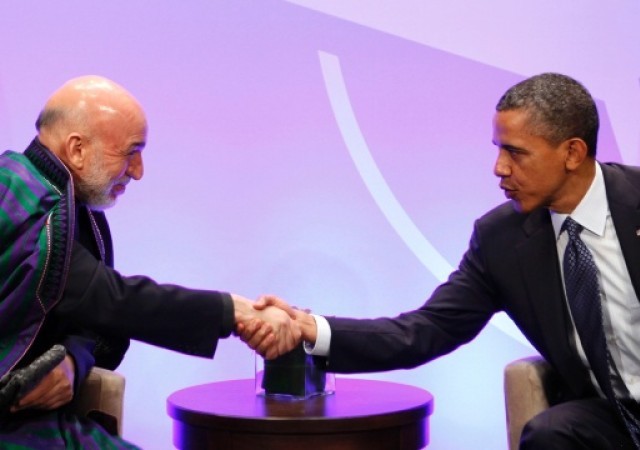 Will all the reconciliations and negotiations still be held when US troops finally leave Afghanistan after a decade of fighting? PHOTO: REUTERS

Recently, the two final term presidents Obama and Karzai, met at the White House to discuss the US-led NATO force withdrawal and future cooperation between the two countries.

President Obama has made it clear that the Afghans will have full responsibility of their country’s security by spring and that the war will come to a responsible end by 2014.

While the US certainly wants to speed up troop withdrawal, some analysts and Afghan politicians have shown apprehension at such a prospect. This is due to their fear that a sudden troop withdrawal might trigger a government collapse, which the Taliban could exploit to return to power-prompting civil war.

In order to avert this possible crisis, the US, Afghanistan and Pakistan are going head over heels to appease the Afghan Taliban. While the US has allowed the Taliban to operate an ‘embassy’ of sorts in Qatar, Pakistan has vowed to release all Afghan Taliban prisoners; notable among them is Mullah Baradar, the co-founder of the Taliban movement in Afghanistan. This has been seen as a statement that Pakistan supports the Afghan peace and reconciliation process. It is playing its part in trying to avoid another bloodbath in Afghanistan.

It is evident from the actions of the US that it wants to leave Afghanistan as soon as possible, because the war has grown unpopular in both the public sphere and in the congress, hence the sped up reconciliation process.

However, will all the reconciliations and negotiations still be held when US troops finally leave Afghanistan after a decade of fighting?

What is the guarantee that the country will not plunge into the civil war that ravaged it when it was tattered after the Soviet withdrawal?

The answer lies within the boardrooms of Tehran, Kabul, Islamabad and Beijing.

An unstable Afghanistan is a threat to all three of its neighbours. Pakistan is a standout example of this situation, where militants constantly flit between the international borders of Pakistan and Afghanistan; wreaking havoc in both the countries.

Iran will also suffer from anti-Shia elements that may seek refuge in an unstable Afghanistan – so will the Chinese, who will have to fend off the East Turkestan Islamic Movement (ETIM), which has close links with the Afghan Taliban.

Admittedly, the Chinese have been quite practical in their approach to the problem and have developed communication channels with the Taliban via the Pakistani military. China also plans to invest in mining and drilling activities in the future.

Nevertheless, the Pakistani establishment and the army, per se, will play the most critical role in the Afghan rehabilitation process by establishing dialogue between the warring factions.

Since it is common knowledge that dialogue holds a considerable amount of influence over the Afghan Taliban, it is very important that it avoids playing dangerous power games of the 90s.

It is very important for all the stakeholders to realise that without the existence of a proper political structure in Afghanistan, the situation will always be volatile. It must be noted that in order to create some semblance of peace, it is imperative for both the northern alliance and the Taliban to enter into negotiations, otherwise the region will again plunge into civil war. This time it’ll be a civil war with the added zest of a dozen or so fundamentalist groups that have sprung up in the Afghan badlands.

Civil war in Afghanistan would have a detrimental effect on the already battered security of Pakistan and allow al Qaeda to properly re-establish itself in Afghanistan.

The US has to get out of Afghanistan but it should only be allowed to do so after it has tidied up the mess it created. It has to make sure that the next Afghan elections will be safe and it must work in coordination with the regional powers to reduce hostilities during that time.

Perhaps now Afghanistan needs political and economic support of its neighbours and allies more than ever to get back up onto its feet after three decades of war.

“These things happened. They were glorious and they changed the world …and then we screwed up the endgame.”

Please do not ruin the endgame.