Lighting candles for the Delhi gang rape changes nothing 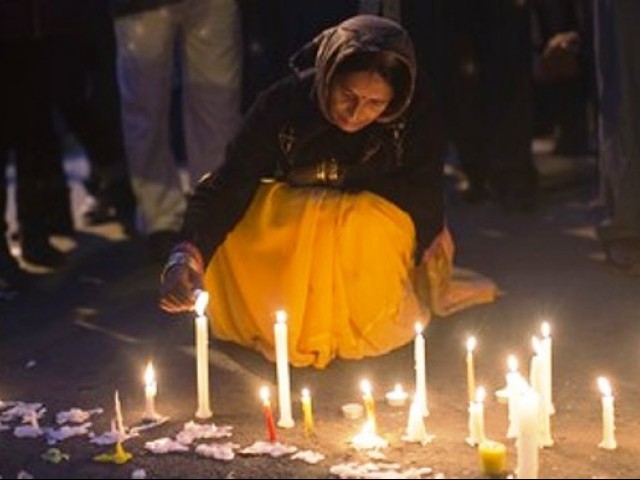 People have to start changing things around themselves, instead of shouting and begging the government to change things for them. The issue isn't the law; the issue is the Indian mindset. PHOTO: REUTERS

I’ve been following, yet intentionally trying to ignore this entire circus surrounding me.

People have been demanding  justice, in terms of the death penalty, for those six rapists’ for weeks now.

Amidst all of this, I fail to understand a few very simple things.

Have we been completely blind to the endless rape and assault cases that are reported in the paper every single day for decades?

Are we oblivious to the slave-like state of Indian women outside the 1% city girls?

The amount of energy spent on debating, watching television broadcasts, attending protests, and discussing these issues is almost amusing.

Is this slowly becoming the latest trend with the Indian educated masses?

Live an empty life and then in our need to show we care, we succumb to “let’s protest peacefully” in front of a government who everyone knows doesn’t really care.

What happened to that?

Today, (as expected) we have all forgotten about it, and moved on with our lives bribing traffic cops away to glory. Would you allow the cop to give you a challan because you skipped the red light while chatting on the phone, without bothering to buckle the seat belt?

Okay, instead of deviating on how futile the whole corruption drama last year was, let’s focus on the current street show.

The same candle light vigils, the same protests, the same slogans, and the same people too perhaps. Aren’t all protests at the end of the day politically motivated?

Furthermore, mind you, I don’t question the intentions of the Indian population, and the frustration is understandable. We all know you care! However, instead of blaming and begging the government to change things for them, how many of us have actually done something about anything?

A simple yet common example would be, we all have maids working in our homes – has anyone ever ventured to ask if they are ill treated in their households? You’d be surprised to hear their stories.

Almost all of our maids/female workers/girls on the street will share the same stories of domestic violence at the hands of drunken husbands, women earning and husbands gambling, childhood rape, education being sacrificed, dowry, early marriages and so on.

Do we have any interest in helping people who need real help?

Do we actually care?

Does your maid getting raped by her father-in-law become less traumatising than what another girl would go through?

Instead of taking a trip to India gate, why not visit the villages surrounding our rich localities where all of our workers live and actually ask poor women if they are treated right? Use our so called ‘high level’ contacts, which usually help us get out of a drunk-driving situation to instead ensure safety of helpless girls, and save them from torture. This is just one thing out of a million little things that can be done to make things better.

Changing the law is just a farce, with people trying to be part of a fancy big cause.

The real cause is all around us. The death penalty of the six men may be a symbolic gesture, but does it even remotely affect the root of the problem?

People have to start changing things around themselves, instead of shouting and begging the government to change things for them. The issue isn’t the law; the issue is the Indian mindset.

Would you ever give your driver/cleaner/sabjiwala a tight slap for misbehaving with his wife? How different is he from the men who raped that girl? Aren’t ordinary men roaming the streets possible of heinous crimes as culpable as done by the six?

Aren’t they to understand that women are not slaves, starting right from the sati period, to villages in rural India, where one woman is shared by all the men of the household as an object, where girls sacrifice their education so the brother can study, or where girls are raped and burned because of inadequate dowry?

Instead of adopting the typical sheep mentality and shouting slogans, a small effort on our part by taking matters in our hands may go a long way. It may be successful in saving a girl’s life tomorrow – from becoming a victim of molestation/assault/sexual abuse.

How difficult is it to spread education to the ones around you?

How difficult is it to make people understand the right from wrong?

Sexual abuse is ghar ghar ki kahani (every household’s story) in India, and we’re all aware of that. Or are we not?

Too bad Kasab was caught before this new found trend caught up – we all missed out on another opportunity to light some candles, shout some slogans on a boring Sunday.

On the bright side, at least some poor candle makers are able to feed their family.

So maybe not all is lost!

A legal graduate of Cardiff University, who loves to travel and write. She tweets @anjaliighosh